Hemavol Powder is a pre-workout supplement by iForce Nutrition. It comes in a range of flavors in 32 serving containers, from Cherry Limeade to Watermelon Cooler. 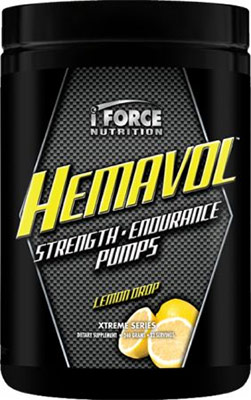 iForce Nutrition are a supplements company that aims to market products that reduce injuries, accelerate recuperation, and extend sports careers.

There’s a negative when looking at the ingredient list for Hemavol – it contains a proprietary blend. But you might be thinking, why is this bad?

Well, a proprietary blend is a mixture of numerous ingredients shown to you as one quantity. This means that you’ll never know the exact amount of each individual ingredient inside, which can cause problems if you’re sensitive to any of the ingredients.

But there are some positives – Hemavol contains Citrulline Malate, which is a great addition to any pre-workout. We’ll expand on this below. 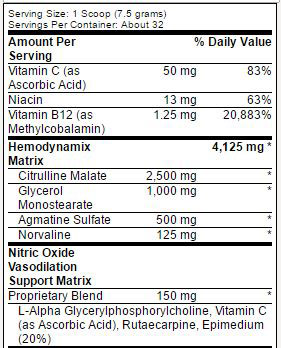 This is a great ingredient to have in a pre-workout supplement – it delivers intense muscle pumps while you lift weights in the gym.

Citrulline Malate works by turning into L-Arginine in your kidneys, which boosts nitric oxide levels. From there, it widens your blood vessels (vasodilation), increasing your blood flow, which promotes muscle pumps.

Ultimately, this means that this ingredient might be ineffective in this supplement.

It’s used in supplements as it’s believed to aid hydration by sucking up water like a sponge in your body. However, apart from that, it offers no benefits to your training session.

However, if you don’t increase your water intake, then you’re in danger of becoming severely dehydrates, suffering from side effects like headache, fatigue, dry skin, and dizziness.

This is extracted from L-Arginine through the removal of a carboxylic acid group (decarboxylation). It’s shown to reduce pain and treat depression.

Ultimately, it doesn’t improve your strength or endurance – so it’s not key to a pre-workout supplement.

However, there hasn’t been many studies to prove that Norvaline delivers this benefit.

We recommend you to avoid Norvaline if you have low blood pressure.

This is the proprietary blend contained in Hemavol. The overall quantity of the bkend is 150mg, but you’ll never know the exact amount of each individual ingredient inside.

This is a compound that’s found in numerous foods that are rich in Choline. It’s shown to improve your mental function (memory and reaction time) and strength in the gym.

However, Alpha-GPC can cause numerous side effects such as heartburn, headache, dizziness, and insomnia.

You’ll see this ingredient widely advertised on the back of fruit juices like orange juice. It’s most commonly used to treat the common cold.

However, it doesn’t offer any significant benefits to your training session. If you want to supplement with Vitamin C, you can get it separately for a cheap price.

Also known as Evodia Rutaecarpa, it’s used traditionally in Chinese medicine, believed to increase body temperature. It works in a similar way to Capsaicin in chili’s to warm your body, but there’s been no studies conducted to prove its fat burning potential.

This also means that there isn’t enough information on Rutaecarpine to prove that it’s safe and effective to use. We recommend staying away from this ingredient until there is numerous studies conducted on it, to avoid any unwanted side effects.

However, there’s been no human studies to prove that it increases T-levels. There are already top quality testosterone booster supplements on the market, so iForce Nutrition have no reason to attempt to create a pre-workout that attemps to raise T-levels anyway. 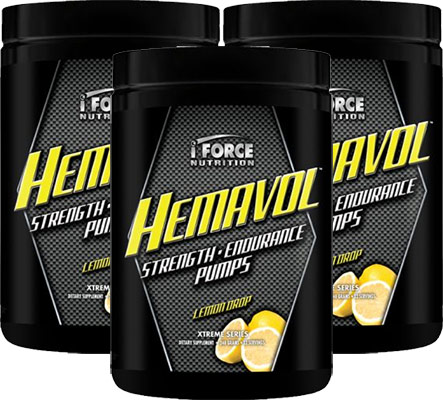 There are a few ingredients in Hemavol that can cause side effects, such as Glycerol Monostearate, Norvaline, and Alpha GPC.

Instead of these ineffective ingredient for a pre-workout, such ingredients as:

You should look for a pre-workout supplement that contains the above ingredients to get the most effective, and best value for money product.