MusclePharm Wreckage adds another pre-workout to the well-known brand’s long list of supplements.

Its Assault pre-workout is quite popular, so it isn’t clear why the guys at MusclePharm added Wreckage to their line. But we’re still intrigued…

Is Wreckage fined-tuned for certain types of athletes, or has MusclePharm brought out the newer pre-workout because their existing product (Assault) isn’t all it’s cracked up to be? Let’s delve deeper…

MusclePharm claims to be “an award winning and worldwide industry-leading, sports nutrition brand” – and the company certainly is a big brand with a huge global following. 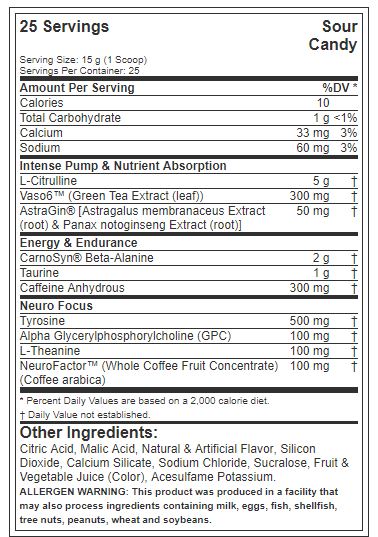 Derived from watermelons, L-Citrulline is a popular ingredient in many pre-workouts – and rightly so.

The amino acid converts to L-Arginine in the kidneys. This increases the levels of nitric oxide in your bloodstream, which widens your blood vessels.

This in turn improves blood flow and send vital nutrients to your muscles for better – and more satisfying – pumps. However, tests show Citrulline Malate is a superior form of this awesome amino.

This is because it adds Malic Acid to L-Citrulline. Malic Acid plays an important role in your tricarboxlic cycle. This helps ramp up your energy for the perfect pre-workout.

So while L-Citrulline is good, you could do better.

We love Green Tea. It’s proven to help you lose weight, as well as offering some benefit to every part of your body. In fact, you’ll find it in some of the best fat burners on the market.

But we’re surprised to see it in a pre-workout.

Sure, the Caffeine in the Green Tea might give you energy and help you focus.

But as this supp contains 300mg of Caffeine Anhydrous (too much), the extra hit you get from the Green Tea may cause you to crash – which is the opposite of what you want.

AstraGin is a trademarked blend of two Chinese herbs – Astragalus and Panax Notoginseng. Both herbs have a long history in traditional Chinese medicine.

This mix of herbs is marketed as an absorption enhancer. It’s supposed to increase the potency of L-Citrulline and Beta-Alanine.

As part of a Chinese blend called Qizhu Tang, Astragalus and Panax Notoginseng showed potential as antioxidants. This is great in theory, because antioxidants can protect your body against cell damage and might reduce fatigue.

But there are a few issues…

The efficacy of AstraGin®

The research (published on the NCBI website) shows the Qizhu Tang blend also includes two other herbs – Rhizoma atractylodis and Poria, alongside Astragalus and Panax Notoginseng.

As a result, there’s currently no evidence that a blend using just Astragalus and Panax Notoginseng is enough to have the desired antioxidant effects.

In addition, the Qizhu Tang study focused on these effects on rats – and there’s currently no research to prove it has the same results in humans. In terms of absorption, Astragalus does show some promise. However, more research is required to prove this beyond doubt.

Until the results of further research are published, we don’t recommend handing over your hard-earned cash for a supp with AstraGin, or either of its key ingredients.

It’s true Beta-Alanine is well-known in the world of sports nutrition.

It’s also fair to say it can boost boost endurance and reduce fatigue, which should make it a worthy addition to any pre-workout (at least in theory).

We don’t advise using Beta-Alanine – with or without the fancy CarnoSyn brand name.

Why? Well, it can cause paresthesia – a condition which can cause different parts of your body to itch and tingle.

While some enjoy these effects, many lifters report that taking Beta-Alanine ruins their workouts for this reason.

One thing MusclePharm’s other pre-workout (Assault) has over Wreckage is that it contains Creatine (although too much, in our opinion).

If you want to boost energy levels without the itching, give up the Beta-Alanine and look for a supp with around 1000mg of Creatine in its place.

Many people mistakenly believe Taurine is a stimulant – probably due to its use in many well-known energy drinks.

But it’s actually a calming agent used to reduce the muscle-cramping effects of Caffeine.

The one human study on the effect of Taurine on muscle soreness failed to show the organic acid has any use for this purpose. This was still the case, even when combined with BCAAs.

Caffeine Anhydrous is a pure form of Caffeine – and it’s the only stimulant you need in your pre-workout.

While coffee is a staple of many lifters’ pre-workout regimes, Caffeine Anhydrous gives you the most targeted hit to help boost endurance, focus and motivation.

However, there’s just too much Caffeine Anhydrous in MusclePharm Wreckage – at 300mg, this is around double the 150-200mg of Caffeine we recommend for optimal performance.

For this reason, you may experience those unpleasant jittery feelings.

Tyrosine is an amino acid known for its role in the production of dopamine, adrenaline and noradrenaliane.

The reason you’ll see it in many pre-workouts is because these anti-stress chemicals can boost your ability to grow muscle. They can also motivate you to push yourself during exercise.

But while research suggests Tyrosine can delay the depletion of feel-good chemicals to aid sleep, there’s no evidence Tyrosine has any influence on workout fatigue.

Alpha GPC is known as a cognitive enhancer, which is no doubt why it’s included in the “Neuro Focus” section of the Wreckage formula. Alongside Caffeine and Phosphatidylserine, there’s some evidence Alpha GPC increases focus and reaction times in people under ‘acute stress’.

And while there’s plenty of Caffeine to complement this compound, this supp doesn’t contain Phosphatidylserine.

As there are no published studies on the effects of Caffeine and Alpha GPC combined (without other ingredients), you can’t be sure how well it works in this supp.

Alpha GPC does show some use as a mental and physical performance enhancer (at least in isolation). But at this time, there’s just not enough evidence to justify its inclusion in a pre-workout supp.

L-Theanine is found almost exclusively in different forms of tea. This amino acid induces the release of gamma-aminobutyric acid (GABA) – a neurotransmitter with a calming effect.

While you may think this is the opposite of what you want in a pre-workout, L-Theanine works alongside Caffeine to give you all the focus, without the jitters.

That’s why many lifters refer to this awesome pairing as ‘Smart Caffeine’. But to get the best results from Smart Caffeine, you need more L-Theanine to offset the negative effects of the stimulant.

As Wreckage uses double the optimal amount of Caffeine, the 100mg of L-Theanine is just not enough to give you the desired effect.

Coffee Fruit is relatively new to the world of sports nutrition. A pilot study suggests the extract can lift brain-derived neurotrophic factor (BDNF) levels, which could then lift your mood and focus.

But at the this stage, there’s no guarantee Coffee Fruit can do what early research suggests it can. 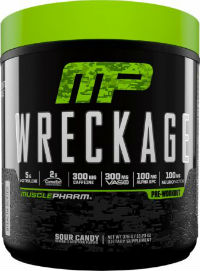 On the whole, MusclePharm Wreckage is safe to take.

However, the large amount of Caffeine Anhydrous (300mg) may cause anxiety, headaches and high blood pressure.

Beta-Alanine can also cause itching/tingling on your face, hands, neck – or in some cases, your whole body.

As it contains high-quality pre-workouts staples like L-Citrulline, Caffeine Anhydrous and L-Theanine, you may see some positive results.

But that’s if you cope with the large amount of Caffeine – double the optimal dose!

While Caffeine Anhydrous is our favorite form of the stimulant, 150mg-200mg is enough for anyone. Whether you’re a stim junkie or not, be warned that 300mg of Caffeine may cause the dreaded pre-workout crash.

In addition, there are just too many ingredients that need more research (Alpha GPC, Coffee Fruit Extract) to warrant their use.

It’s disappointing to see yet more unproven ingredients in products made and sold by such a big name in the fitness industry.

Before shelling out your hard-earned cash for a supp, you want to know it WILL work – it’s never good enough to sell a product that MIGHT work.

With this in mind, we can’t endorse MusclePharm Wreckage.

Spend your money on a pre-workout that uses ingredients designed to boost your stamina, focus and motivation, as well as those proven to give you awesome muscle pumps.