Now we’re not sure what this means. But we can tell you this product claims to promote:

The one Nuclear Armageddon pre-workout  review we’ve seen says this product is “on point”. That description’s a little vague, so we thought you might like a more detailed review…

We can’t glean much about Anabolic Warfare at all, as the brand’s About Us page no longer exists, despite the link still being up on site.

But we can tell you the brand has a registered address in Austin, Texas. The brand also used to go by the name of Anabolic Blackout.

We can’t find any more info, so we’re not going to waste our time digging around.

As it stands, there’s no way to tell who’s behind Anabolic Warfare. We don’t know whether the maker is a real company, or just a kid messing around with their new chemistry set.

As always, proprietary blends are the first thing we look for when deciding whether or not to buy a pre-workout. And we let out a loud sigh when we saw Anabolic Warfare contains the proprietary “Stimulant Blend”.

Note: Proprietary blends are sub-formulas which list ingredients, but not doses.

We also notice two or three ingredients that may cause side effects. 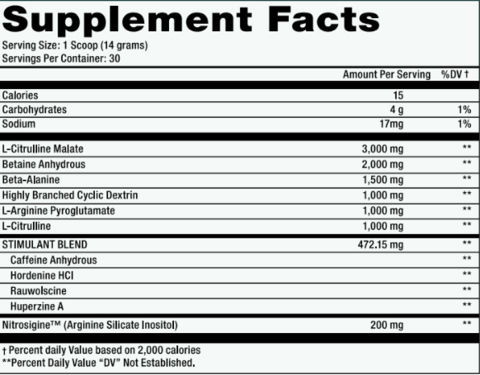 But when reviewing any pre-workout, it’s almost as important to look at dosages as it is to assess ingredients. And we’ve found the optimal dose of L-Citrulline Malate to be 6g, so we’re dismayed to find Anabolic Warfare contains only half that.

The molecule Betaine (aka Trimethylglycine) has been the subject of robust research in recent times It has been analyzed for its ability to improve aerobic running capacity, reduce fatigue, boost endurance and raise power output.

But while Betaine appears to improve exercise performance in isolated cases, the results are not consistent.

You should also be aware Betaine can cause Fish Odor Syndrome (FOS). In other words, it can make you smell like rotting fish.

Beta-Alanine is an amino acid shown to improve performance during moderate to high-intensity cardio. It can also reduce fatigue to some extent.

Despite these benefits, Beta-Alanine can cause itching and tingling of the skin – usually on the backs of the bands, neck and face.

And as so many lifters and athletes tell us this condition – known as paresthesia – wrecks their workouts, we cannot recommend it.

While this sounds great, there’s still very little scientific evidence to back up these claims. Nor does anyone appear to know enough about HBCD to comment on its potential side effects.

As a result, we cannot recommend this ingredient (yet).

L-Arginine is an amino acid that’s well-known in the world of sport and fitness for its ability to produce nitric oxide in the body. This is desirable because nitric oxide boosts blood flow to help make your muscles stronger faster.

And while some research does show a link between L-Arginine supplementation and an increase in nitric oxide, this does not appear to enhance muscle pumps or speed up results in the weight room.

It would’ve made more sense to remove Arginine and make more room for L-Citrulline Malate. This is because while Citrulline is a precursor of Arginine, the body absorbs the former more efficiently (which means better results in the gym).

Along with Citrulline Malate, Caffeine is one of the best two ingredients in the Nuclear Armageddon pre-workout.

The subject of many decades of research, Caffeine is a proven to be a safe and effective stimulant (at the right dose) . With this in mind, it’s no wonder 9 out of every 10 Americans use Caffeine in one form or another.

Yet it does much more than help you wake up in the morning. Research also shows Caffeine boosts focus and motivation – it can even make you stronger.

To enjoy all these benefits and avoid jitters, the optimal dose of Caffeine is 150-200mg. We hear this supplement is packed with Caffeine. But because the dose info is hidden in a proprietary blend, there’s no way to say for sure whether this supp contains too much Caffeine or not.

Hordenine is found in a range of foods, including barley, malt – and most worryingly, Bitter Orange.

Hordenine has a similar structure to Synephrine, which has been known to cause or aggravate certain health conditions. These include high blood pressure and rapid heart rate.

In fact, WebMD describes Hordenine as “POSSIBLY UNSAFE when taken by mouth”. Besides, claims that Hordenine improves athletic performance aren’t backed up by science, as it remains drastically understudied.

As a result, this is an ingredient to avoid in any supplement.

Rauwolscine is a molecule with a similar structure to Yohimbine, which has been linked with reports of severe side effects and is now banned in many countries across Europe.

More worryingly, Rauwolscine is said to be even more potent than Yohimbine. But even more alarming is that this ingredient is seriously under-researched.

There are some vague claims it has “fat-burning potential”. But we have no idea why the guys behind Anabolic Warfare chose to include it in this supp.

As a pre-workout that contains two potentially unsafe ingredients in Hordenine AND Rauwolscine, it ain’t looking good for Nuclear Armageddon.

Huperzine A is a natural alkaloid which derives from the Huperzia Serrata plant (also known as club moss).

It’s known as a nootropic due to the way in which it can raise the brain’s levels of acetylcholine, the ‘learning neurotransmitter’.

But despite its brain-boosting abilities, there’s very little evidence this translates to increased focus or reaction times in the gym. 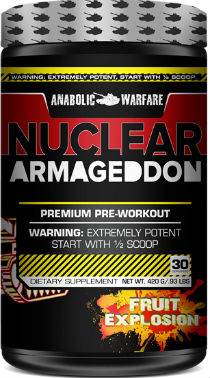 Anabolic Warfare’s Nuclear Armageddon contains some ingredients that may cause side effects. These include:

While annoying, the mild side effects caused by Betaine and Beta-Alanine are harmless.

However, Hordenine and Rauwolscine may cause more severe side effects. We therefore advise extreme caution before taking either undertested ingredient.

We’re not at all impressed by the Nuclear Armageddon pre-workout.

As is often the case, this supplement contains two important ingredients in Caffeine and L-Citrulline Malate. And despite our mixed feelings about it, Beta-Alanine does provide some performance-boosting benefits.

But apart from that, this pre-workout ain’t good. Our hearts sank when we saw the proprietary blend, but it turns out that’s not the worst of it…

Nuclear Armageddon contains Betaine, which can make your breath and sweat smell fishy. It also contains Hordenine and Rauwolscine, which have similar structures to ingredients banned in many countries. Not good.

Due mostly to the presence of two ingredients which WebMD labels “POSSIBLY UNSAFE”, we recommend you pass up Nuclear Armageddon and look for an all-natural pre-workout with ingredients that are both safe and actually work.