Outlift Amped is a variation on quite a popular pre-workout – Nutrex’s Outlift.

Nutrex says it created this newer version to “[bridge] the gap for those wanting clinically dosed ingredients…and extreme levels of stimulant energy”.

We always treat supplements that offer extreme levels of anything with caution. But the positive reviews we’ve seen online convinced us to give it a shot. Here goes…

Nutrex Research has been around since 2002 and is now a big name in the supplement industry.

The company claims its products “are truly in a class by themselves” and promises to “continue to provide a way to make them even better.”

Outlift Amped contains some high-quality ingredients and others we’d rather not see in a pre-workout supp. 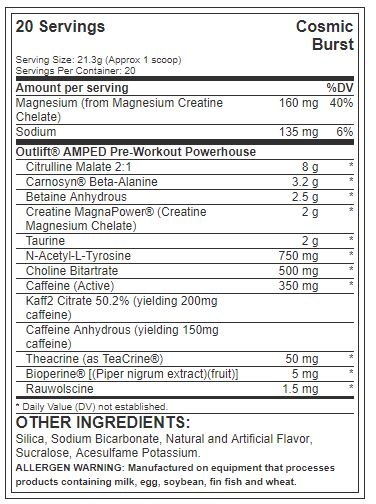 It’s great to see Citrulline Malate in any pre-workout supp.

Why? Because it has the proven power to give you awesome muscle pumps.

The amino acid is a precursor to L-Arginine, which boosts nitric oxide levels in your kidneys.

This in turn dilates your blood vessels, which allows more nutrients to flow to your muscles and help them grow.

Citrulline Malate is a blend of L-Citrulline and Malic Acid – and it’s all the better for it. L-Citrulline is known as food for your muscles and we still find it in many pre-workouts.

Yet the addition of Malic Acid suppresses ammonia in your body to help fight fatigue (which makes this awesome amino even better).

We’ve found 6000-7000mg of Citrulline Malate to be optimal for muscle pumps and endurance. By contrast, Outlift Amped contains 8000mg, which is too much for our taste.

Beta-Alanine is a modified form of Alanine (an amino acid).

There’s evidence to show Beta-Alanine can improve endurance during moderate to high-intensity exercise (such as sprinting).

This is because when you ingest Beta-Alanine, your body converts it to Carnosine, which protects your muscles from acid build-up.

But here’s why we don’t advise taking Beta-Alanine…

Beta-Alanine can cause itching and tingling, both of which are symptoms of paresthesia. Many lifters describe prickly sensations over their hands, neck, or face when taking it. However, some users say these feelings occur all over their bodies.

As we’ve said elsewhere on this site, we believe Beta-Alanine does the same job as Creatine – just not as well.

And because Outlift Amped also contains Creatine, Beta-Alanine is taking up valuable (and unnecessary) space in this pre-workout.

Also known as Trimethylglycine (TMG), Betaine is found in a wide range of foods, including beetroot, spinach, bran and quinoa.

Some research shows this amino acid may help increase power output and endurance. However, other studies seem to dispel these claims.

As a result, there’s no conclusive proof Betaine can do what many sports-nutrition marketers claim it can.

The main problem with Betaine

Too much Betaine can cause your breath and body to smell like rotting fish.

So even if Betaine did boost endurance to help you train harder and achieve the physique of your dreams (which it doesn’t), is this really worth stinking for? We say no.

Creatine is one of the best-researched and effective ingredients in the world of sports nutrition, so it’s always great to see this molecule in a pre-workout supp.

In fact, Creatine is vital for your ability to function.

But while your body synthesizes Creatine, taking it in supp form gives your body an awesome boost. Here’s how…

When you work out at a high intensity, this depletes the energy in your body. Taking Creatine in a supp gives you the energy, strength and focus you need to power through.

We love Creatine, but we prefer Monohydrate to any other form

Creatine Monohydrate has been used by athletes and lifters for decades – and you’ll still find it in some of the best pre-workout supplements.

And a great deal of research provides concrete proof of Creatine Monohydrate’s awesome power as a pre-workout ingredient.

Some research suggests Creatine Magnesium Chelate may reduce water-weight gain (on top of everything Monohydrate does).

Taurine is an amino acid found in meat and poultry, eggs, dairy, seaweed and more.

The Nutrex website claims to include Taurine in this supp for its supposed ability to reduce fatigue, increase alertness and aid recovery.

However, there’s no evidence to show Taurine has any positive effect on anaerobic running capacity, muscle soreness, or muscle tiredness.

So what does Taurine do?

One study suggests Taurine may improve walking distance in people with heart conditions. But apparently, this is the best Taurine can do.

So if you’re otherwise healthy and looking for an ingredient to add power to your workouts, we suggest you ignore Taurine and look elsewhere.

N-Acetyl-L-Tyrosine is a acetylated form of L-Tyrosine, which means it dissolves in water faster and more efficiently.

This dietary amino acid is thought to increase levels of dopamine and other feel-good chemicals – which is probably why Nutrex claims it improves focus and motivation.

Some research suggests L-Tyrosine can suppress mental tiredness, but there is no hard-and-fast proof that it enhances focus during physical activity.

The marketing blurb for Outlift Amped says the product includes Choline Bitartrate because it increases “mental energy and cognitive processing.”

However, medical research dismisses claims choline supplementation has any effect on cognitive capacity, training volume, or even the rate of perceived exertion.

Along with Betaine and Beta-Alanine, we always advise avoiding Choline in supp form.

This is because Choline can cause fishy body odor. And as Betaine can cause the same problem, were dismayed to find both Choline and Betaine in this supp.

Many lifters and athletes use Caffeine to boost endurance and mental focus in the weight room – and decades of research proves it’s great for this purpose.

However, Outlift Amped gives you a total of 700mg of Caffeine in three different forms – which is WAY too much. While it may be holding true to the “Amped” name, we still don’t advise taking any more (or less) than 150-200mg of Caffeine.

As there’s so much Caffeine in Outlift Amped, we’re concerned the supp doesn’t contain any L-Theanine to help suppress those unwelcome jittery feelings.

Theacrine appears to be a modified form of Caffeine and has many of the same effects as the better-known stimulant.

Early research suggests Theacrine offers the same stimulatory effects as Caffeine, but without the increase in heart rate and blood pressure, or the resulting anxiety.

But while Theacrine shows promise as a stimulant, there is not yet enough evidence to justify its use in this pre-workout supp – especially since Outlift Amped already contains a whopping 700mg of Caffeine.

Bioperine is a patented form of Piperine (aka Black Pepper Extract). It’s used to help your body absorb more of each nutrient in different supps.

But in a supp containing a massive amount of Caffeine, as well as Choline, Beta-Alanine and Betaine, we’re not sure greater bioavailabilty is desirable in Outlift Amped.

Rauwolscine is a diastereoisomer (alternate form) of Yohimbine. Limited research implies this alkaloid may induce fat loss by blocking the receptors which preserve fat stores in your body.

However, we have two issues with the use of Rauwolscine…

First, Outlift Amped is meant to be a pre-workout, not a fat burner.

Second, more research is needed to prove beyond doubt that Rauwolscine has fat-burning properties.

Yet again, we’re disappointed to see an unproven ingredient in a supp made by a respected brand. 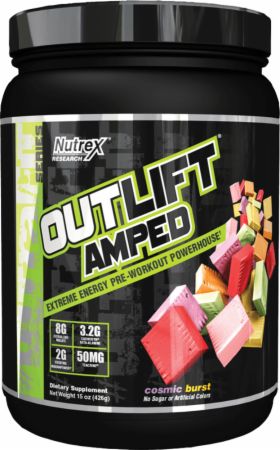 On the whole, Outlift Amped is safe to take.

But due to the huge amount of Caffeine (700mg) in this supp, you may experience the following symptoms:

The best we can say about Nutrex Outlift Amped is that includes Citrulline Malate and Creatine, and doesn’t use any proprietary blends.

Why? Because Citrulline Malate gives you awesome muscle pumps. Meanwhile, the lack of proprietary blends gives you a way to gauge the effectiveness of each ingredient.

Now for the bad bits…

Having tested hundreds of supplements over the years, we’ve found 150mg of Caffeine to be the optimal dose for energy, focus and motivation.

One of our biggest concerns about Outlift Amped is that it gives you a massive 700mg hit of Caffeine – and could make you feel anxious and jittery as a result. Amped it may be, but good this is not.

This supp also mixes Betaine and Choline, both of which cause fishy breath and body odor in many users.

And while Beta-Alanine can induce slight increases in endurance, it can also cause your hands, neck, face and even your whole body to itch or tingle. As many lifters find these sensations unpleasant and distracting, we always advise avoiding Beta-Alanine.

For all of these reasons, we suggest you ignore Outlift Amped and look for a pre-workout with ALL high-quality, proven ingredients.