ON Pre Workout vs Jack3d Review

Jack3d gained attention for the wrong reasons, and was even banned in the UK after fears that it could seriously harm people. However, it’s been reformulated since then, so we’re looking to see if it can keep up with a popular pre-workout on the market, ON Pre Workout.

We’re glad that both companies have tried adding ingredients aimed at improving your muscle pumps. This is a benefit usually forgotten about by many, so we’re interested to see whether either product can actually deliver.

In this review, we’ll be examining both pre workouts’ ingredient lists and choosing a winner based on safety and effectiveness.

Optimum Nutrition are one of the biggest companies in the supplements industry. They’re known for their highly rated Gold Standard Whey Protein, but this ON Pre Workout has gained a good reputation too.

In fact, big names such as The Rock have been known to use Optimum Nutrition’s products before, which shows you how respected this company is.

Although USP Labs aren’t as well known or respected as Optimum Nutrition, they did get into the spotlight for a brief period of time; as we mentioned, their Jack3d pre workout was very controversial, and was banned in the UK after being believed to cause harmful side effects.

But since then, USP Labs have reformulated Jack3d, which is now legal everywhere.

This company also produces protein powders and fat burner supplements, but they aren’t as well-known as Jack3d.

This is the important section. The ingredients inside supplements determine how safe and effective it will be.

However, straight away we see a problem with USP Labs’ Jack3d; it contains a proprietary blend, meaning the dosages of ingredients are hidden from you.

Ultimately, this is a problem as your risk of suffering from side effects increases when you aren’t aware of the exact dosages of nutrients you’re consuming. On a positive note, ON Pre Workout doesn’t contain any proprietary blends, so from first glance, we’re siding with Optimum Nutrition’s product.

Anyway, we’ll explain everything in more detail below. See for yourself: 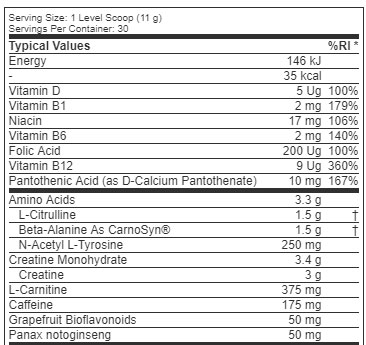 Vitamin D3 is the best testosterone boosting nutrient, but it’s not needed in a pre workout supplement.

Basically, ingredients in a pre workout should be effective within a 20-30 minute timeframe; studies have shown that you need to consume 3-4 servings of vitamin d3 spread throughout the day for it to work in the long term.

One of our favorite pre workout ingredients, l-citrulline is able to convert into l-arginine; this has a direct impact on your nitric oxide levels, which then proceeds to deliver enhanced muscle pumps while you exercise.

However, there’s a problem. Optimum Nutrition have made a mistake by underdosing l-citrulline in ON Pre Workout.

For future reference, the optimal dosage of l-citrulline is above 3,000mg per serving, but ON Pre Workout only contains 1,500mg.

As a result, it’s not guaranteed whether you’ll benefit from this ingredient or not (which is a great example of why dosing a nutrient correctly is so important).

Now, this is one of the most controversial nutrients in the supplements industry. Basically, if you’ve ever experienced tingly skin after taking pre workouts, then it most likely contained beta-alanine; it’s shown to cause this side effect, called paresthesia, in many studies.

But it’s also important to know that beta-alanine is able to improve your endurance levels too.

Personally, we don’t think the benefit is worth suffering paresthesia for. So we try to stay away from pre workouts containing beta-alanine.

There’s no denying that l-tyrosine is a beneficial ingredient. It’s able to improve your cognition, meaning it’ll benefit your memory and attention span.

But we don’t think that l-tyrosine is a necessary addition to ON Pre Workout – especially as caffeine offers enough of a boost to your focus levels in the gym.

As a result, l-tyrosine is an unneeded addition to ON Pre Workout here.

This is believed to be safest and most reliable form of creatine, and it’s one of the best ingredients you can find in pre workout supplements.

Another key asset in any pre workout supplement, l-carnitine has shown to be able to reduce your muscular fatigue and damage. Ultimately, this will help speed up your recovery and encourage you to make more progress in the gym.

But if we were being very critical, we’d point out that Optimum Nutrition have slightly underdosed l-carnitine in ON Pre Workout; its shown to work best when consumed in 500mg servings, but this pre workout only contains 375mg.

Saying that, we still think that l-carnitine will have a positive effect on you in ON Pre Workout.

It was important to us that Optimum Nutrition got the dosage of caffeine in ON Pre Workout right. And we weren’t dissapointed.

Many companies try to make their products ‘stronger’ by adding massive amounts of caffeine into their pre workouts. But Optimum Nutrition have added a very sensible 175mg caffeine in ON Pre Workout.

If you consume under 200mg caffeine per serving in pre workouts, then you’ll be safe from side effects like jitters. So good job here.

This is more of a ‘filler’ ingredient than a key one, and it’s basically believed to improve your general health.

While it’s beneficial, it’s not going to make a big difference on your performance in the gym. So we don’t think that grapefruit bioflavanoids are needed in ON Pre Workout.

Panax ginseng can be a great addition to a testosterone booster supplement. However, it’s not going to be very effective in a pre workout; like with vitamin d3, this needs to be consumed 3-4 times per day, while you’ll only consume ON Pre workout once per day.

However, there’s no negatives to having this in here either. 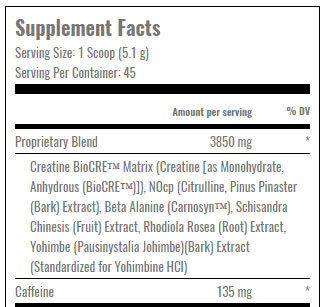 As we’ve already mentioned, all of the ingredients in Jack3d are inside a proprietary blend titled ‘Proprietary Blend’. So in all fairness to USP Labs, they haven’t tried to catch you out here.

But remember that this means no-one will know the exact dosage of any nutrient inside this pre workout; this makes it hard to fully examine how safe and effective Jack3d really is.

But we’ll still analyze each ingredient for you below…

It’s not often that you see a patented version of creatine monohydrate, but that’s what USP Labs have added into Jack3d here.

We’ve already told you about creatine monohydrate in the last section, so we’ll skip ahead to something else.

Citrulline is another nutrient that we’ve already analyzed for you in the last section. But it’s not good news here, as it’s inside a proprietary blend – meaning no-one knows the exact dosage of it.

It’s very unlikely to have been added in an optimal dose, as the overall quantity of the proprietary blend is 3,850mg. As a result, we’ll be assuming that USP Labs have underdosed citrulline in Jack3d.

Another ingredient we’ve already covered. Remember that this can cause your skin to itch, but can also enhance your endurance levels.

Ultimately, it’s a beneficial nutrient that causes a side effect – not the best ingredient available here.

Although schisandra chinensis extract is thought to improve sporting performance, the evidence behind this is lacking.

So the only thing studies have shown this ingredient to be capable of, is reducing anxiety levels. As you can imagine, this isn’t a key addition to any pre workout supplement.

This is the first key pre workout ingredient that isn’t seen in ON Pre Workout.

What does it do? Answer: Reduces fatigue and damage while improving your focus in the gym.

However, again the problem is that no-one knows the exact dosage of rhodiola rosea in Jack3d, as it’s inside a proprietary blend here.

By now you should know why proprietary blends are a bad thing.

After we heard that Jack3d had been reformulated, we thought that USP Labs had removed any potentially harmful ingredients.

In all fairness, they had removed DMAA (which has been banned), but they seem to have added an ingredient reported to cause numerous side effects instead – yohimbe.

Basically, companies add yohimbe bark extract into their supplements, as it contains yohimbine (which has been banned). As they’re not directly adding yohimbine, they can’t get into trouble for it.

However, this is one of the worst ingredients you can add into a proprietary blend, as it’s shown to cause numerous side effects; as you don’t know the exact dosage of it, your risk of side effects is increased.

We recommend staying away from supplements containing yohimbe and proprietary blends for this reason.

The only potential side effect that you’re at risk of with ON Pre Workout, is paresthesia from the beta-alanine. However, this isn’t life threatening, so it’s not the worst thing that can happen to you.

With Jack3d, you’re at risk from much more potential side effects. It contains yohimbe, which has been reported to cause numerous side effects such as nausea, high blood pressure and anxiety.

And as Jack3d contains beta-alanine too, you’re likely to experience paresthesia too.

So in effect, the bad reputation that Jack3d gained due to causing harmful side effects is still relevant with their ‘upgraded’ formula.

It’s clear that Optimum Nutrition’s ON Pre Workout is the clear winner out of the 2 supplements here. It’s only likely to cause a non-serious side effect, while containing sensible dosages of caffeine without any proprietary blends.

However, if we’re being honest, neither of these products will beat the top rated pre workouts available.