ON Pre Workout vs N.O Xplode

This is truly a battle of the giants here. Both ON Pre Workout and N.O Xplode are very popular pre workout supplements, so it’ll be interesting to see which one is better than the other.

We noticed that none of these pre workouts claim to enhance your muscle pumps in the gym; this is one of our favorite benefits from taking pre workouts, so we’re dissapointed to see that it’s not on the menu.

However, even though some companies don’t advertise it, some contain the right ingredients necessary to deliver this benefit. The only way to find out is by looking at both of these supplements’ nutrient profile, so we’ll take a look for you in this review.

Optimum Nutrition are the company behind ON Pre Workout. This brand is plastered over gym walls, and they’re gained an especially good reputation for their gold standard protein powder.

However, their pre workout supplement has also become quite popular in the market. We’ll be keeping a close eye on whether this product has worked from Optimum Nutrition’s reputation, or really is worth trying out.

BSN are a supplements brand owned by Glanbia pls (which are a company based in Ireland).

They’ve become a respected brand since being founded in 2001, sponsoring some big names like Conor McGregor and India Paulino.

Like Optimum Nutrition, BSN are also well-known for their protein powders. However, this N.O Xplode pre workout picked up masses of attention since it’s release, and not always for the right reasons…

In terms of nutrient profiles, we’re glad to see that both pre workouts don’t contain any proprietary blends; this means that you can clearly see the dosages of each ingredient inside, without any being hidden from you.

However, we can see that the dosage of caffeine in N.O Xplode is very high at 300mg per serving. In a nutshell, this puts you at risk from suffering jittery side effects, which isn’t great when you’re wanting to concentrate on your gym session.

Anyway, we’ll expand on this in this section; we’ll examine the most important nutrients in both products, so you’ll get a feel for how safe and effective they are.

Citrulline is one of the best ingredients you can find in pre workouts, as it’s able to increase nitric oxide levels.

What does this do? Answer: increase your blood flow and enhance your muscle pumps.

However, it’s important to know that the optimal dosage of l-citrulline is 3,000mg. As there’s only 1,500mg in ON Pre Workout, it’s not likely to improve your muscle pumps here.

This compound is a very common addition to pre workout supplement, but it’s not always a good thing; beta-alanine has shown to cause a side effect called paresthesia, but can enhance your endurance levels.

What’s paresthesia? Answer: tingling on the skin of your face, chest, hands and extremities.

This side effect is the reason some people are put-off taking pre workout supplements, so we always recommend you to avoid beta-alanine.

You might not have heard about this ingredient before, but it’s known for being able to improve your cognition.

As a result, it’s quite commonly added into nootropic supplements. However, it’s not as beneficial in pre workouts, as you’re not going to need much enhancements in memory to perform better.

But one thing’s for sure – l-tyrosine works.

If you’ve only heard of 1 nutrient inside these supplements, then it’ll be very likely to be creatine monohydrate.

This is often part of many peoples’ first steps into the world of supplements, choosing to add creatine into their protein powder. And it’s also for being one of the safest and most reliable nutrients available.

When it comes to improving your workouts, you want to stay fresh and ready to go. Well, l-carnitine allows you to do this, as it’s shown to reduce muscular fatigue, while also improving your focus in the gym.

As a result, we believe that l-carnitine is a key feature in any pre workout supplement. But if we were to be overly critical, we’d point out that Optimum Nutrition have slightly underdosed this nutrient at 375mg (its optimal dosage is 500mg).

It’s common knowledge that caffeine can boost your energy levels. But what some forget is that this stimulant can also cause unwanted side effects like jitters when consumed in large dosages.

As a result, it’s not good to see companies adding overdosages of caffeine. So it’s great to see that Optimum Nutrition have added an optimal dosage of caffeine (under 200mg). 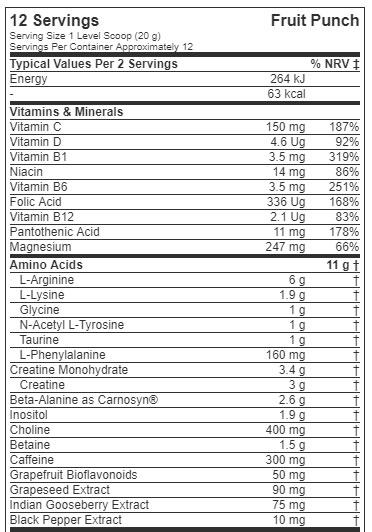 We mentioned that citrulline was a great addition to any pre workout before. Well, l-arginine is believed to offer the same benefit, but it has a poor absorption rate when orally consumed.

As a result, l-arginine isn’t very effective when consumed in a pre workout supplement.

We’ve already mentioned this ingredient; in quick summary, it’s able to improve your cognition, but isn’t vital in a pre workout supplement.

You might have heard about taurine before, as it’s included in energy drinks. But contrary to popular believe, taurine isn’t a stimulant.

But it has shown to reduce cramping in the gym; while this isn’t essential, it can be a great bonus to any pre workout.

This is another ingredient that’s also in ON Pre Workout, and it’s able to improve your strength and endurance in the gym. It contains the exact same dosage, so BSN have also dosed this well here.

Remember that beta-alanine can cause paresthesia (which is a tingling on the skin of your face, chest hands and extremities).

Well, BSN have also added this ingredient into their pre workout, N.O Xplode. As a result, you’re also likley to experience this side effect here too.

But as we mentioned, it’s not all bad news; beta-alanine has shown to enhance your endurance in the gym too.

We’ve grouped these 2 ingredients together, as they’ve shown to cause the same side effect – fishy odors in your breath and sweat.

But the worst part is that choline and betaine haven’t actually proven to deliver any useful benefits.

Caffeine can be a key addition to a pre workout when it’s dosed properly. However, it can also cause jitters and energy crashes when it’ consumed in large dosages (over 200mg).

The bad news is that BSN have added a massive 300mg caffeine per serving, putting you at risk from these side effects.

There’s only 1 possible side effect with ON Pre Workout, which is due to it containing beta-alanine (paresthesia).

We’ll remind you what paresthesia is; it’s a tingling on the skin of your face, chest, hands and extremities.

But the good news is that this is non-serious and people can even work through this side effect.

In terms of side effects, things are a bit more serious with N.O Xplode; as it contains a massive 300mg caffeine dosage, it can cause jitters and energy crashes.

So it’s no surprise that many users have complained about these side effects before.

But that’s not all, X.O Xplode also contains choline & betaine, which have proven to cause fishy odors in your breath and sweat. Along with beta-alanine, which can cause paresthesia (tingly skin).

As you can see, ON Pre Workout and N.O Xplode doesn’t come free from side effects.

However, ON Pre Workout contains better ingredients and is less likely to cause side effects than N.O Xplode. Ultimately, it’s the massive 300mg dosage of caffeine in N.O Xplode that let’s it down.

While ON Pre Workout is better option, we don’t think it can keep up with the best pre workouts on the market. But between these 2, it’s clear that Optimum Nutrition takes home the beef.