Optimum Nutrition makes a host of well-regarded fitness supplements – and we’ve tried and reviewed some of them on this website.

But we’ve never put Pro Pre through its paces – until now.

Pro Pre retails for $32.99, which makes it a little cheaper than some of our favorite pre-workouts. Given the lower price and and the good name of the ON brand, we want to see how it stacks up…

Optimum Nutrition began life in the 1980s and it continues to build on a stellar reputation in the world of sports nutrition.

The company makes and sells a host of protein powders and weight gainers, as well as post-workout and pre-workout supps.

A quick look over the Optimum Nutrition Pro Pre label suggests this may be a very good supplement – it contains some stellar ingredients. 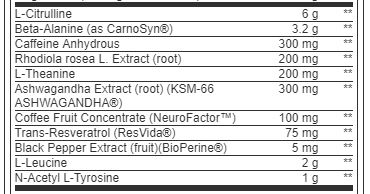 Alongside L-Arginine and L-Ornithine, L-Citrulline is one of three dietary amino acids.

Your kidneys convert Citrulline into Arginine, which increases the amount of nitric oxide in your blood. This process improves blood flow and gives you better muscle pumps in the weight room.

You’ll find Citrulline in melons, cucumbers, pumpkins, dark chocolate, walnuts and many other sources. But you’d have to eat a lot of these foods to ingest the optimal dose (6000-8000mg).

For this reason, it makes sense to take it in a supplement.

However, it’s worth noting Citrulline Malate is a more potent version of this awesome amino.

Malic Acid battles fatigue by helping your body turn fat, carbs and protein into energy. So while we were pleased to find Citrulline in this supp, we would’ve preferred Citrulline Malate.

Beta-Alanine is well-known in fitness circles for its ability to boost physical performance.

Its active ingredient is carnosine, which keeps acidity levels in check and allows your muscles to work harder under stress.

But we’re still not sure why the guys at ON included Beta-Alanine in their Pro Pre formula.

Because Creatine does everything Beta-Alanine can and more. Creatine not only improves endurance – it also helps you focus and pushes your muscles to grow bigger.

Beta-Alanine can also cause parathesia – an itching or tingling sensation many lifters find repellent.

Caffeine is a classic pre-workout ingredient – it’s not unusual to see lifters down a couple of espressos before their workouts.

This comes as no surprise considering Caffeine is an terrific stimulant that gives you laser focus. But it also blocks the adenosine receptor to ward off fatigue and make your intense workouts easier.

Caffeine Anhydrous is a pure-state form of the stimulant, which adds a targeted punch to your pre-workout.

However, the ON Pro Pre supp contains 300mg of Caffeine Anhydrous – which is about twice as much as you need. To avoid pre-workout jitters, you only need between 150mg and 200mg to soak up all its benefits.

Rhodiola Rosea ranks just behind Asian Ginseng as one of the most popular adaptogens on Planet Earth.

The bright-yellow-green herb is also proven to combat anxiety and boost stamina, focus and endurance in the gym. It’s ability to reduce fatigue ensures you’ll recover faster between sets and reach your fitness goals faster.

For this reason, it’s no surprise to find Rhodiola Rosea in some high-grade pre-workout supplements.

L-Theanine is a well-known calming agent – and studies show it soothes the jitters you may otherwise suffer when taking caffeine.

This makes L-Theanine great for when you need to maintain focus and plow through your workout like a boss.

The presence of L-Theanine is good news for ON Pro Pre as it contains a hefty dose of Caffeine (too much).

As it’s loaded with so much Caffeine, it’s telling that ON Pro Pre also contains twice the amount of Rhodiola Rosea (200mg) than the best pre-workouts we’ve tried.

Ashawagandha is a staple of traditional Indian medicine and has been for centuries. Unlike a lot of medicinal herbs, claims of its power are backed by research.

Ashawagandha improves strength and endurance in the weight room, so it’s not exactly a shock to see it on the list of ingredients for Optimum Nutrition’s Pro Pre.

But this supp doesn’t use enough Ashwagandha to help get the results you’re looking for.

Studies show you need at least 2000mg per serving for the desired boost in endurance and strength, whereas Pro Pre contains just 300mg.

Coffee Fruit Concentrate is one of the new kids on the block in fitness circles. In fact, you’ll find it in some of the latest fat burners, as well as pre-workout supps.

But while it shows great potential as a pre-workout ingredient, we can’t recommend using Coffee Fruit Concentrate until science proves beyond doubt that it actually works.

Its presence in wine is the source of the common belief that drinking a glass of red each day makes you live longer.

And there may be some general health benefits to taking this ingredient. However, research on the aerobic effects of the polyphenol in humans is not so positive…

A study published by NCBI suggests Trans-Resveratrol blunts the boost in aerobic capacity that you would otherwise naturally achieve through intense exercise. As a result, we don’t advise taking any pre-workout with this ingredient.

Black Pepper Extract (or Bioperine) can enhance your body’s ability to absorb certain nutrients by between 30% and 2000%. In fact, you’ll find Bioperine in some high-grade T-boosters.

But in the case of this pre-workout supp, it’s likely used to boost the effects of Trans-Resveratrol. As we don’t advise using the polyphenol to fuel your workout (see why above), Bioperine may be wasted here.

You may have seen L-Leucine in many pre-workouts – but that doesn’t mean it’s needed.

We can’t see any good reason to use L-Leucine in a pre-workout supp. Because, while L-Leucine does help your muscles recover, it would be best to take during or after your workout.

The reason you need a pre-workout is to boost stamina and improve performance – the aim is not recovery.

In addition, you can get all the L-Leucine you need by eating chicken, beef, eggs, seafood (or even Tofu, if you’re a veggie).

N-Acetyl L-Tyrosine is a more soluble form of L-Tyrosine – meaning your body absorbs the former faster than the latter.

As these feel-good chemicals improve focus and aid muscle growth, the use of Tyrosine in this supp may seem a real selling point to some.

However, there’s no concrete proof that Tyrosine has any direct effect on your body’s levels of these mood and mind enhancers. 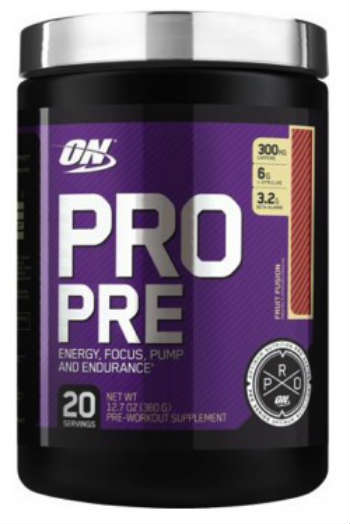 As you would expect from a respected company like Optimum Nutrition, the ingredients in Pro Pre are safe, for the most part.

Despite this, you may experience insomnia, anxiety and irritability from the large dose of Caffeine in this supplement (300mg).

Rhodiola Rosea is proven to boost strength and endurance, while Caffeine Anhydrous gives you laser focus and the motivation to push harder during your workout.

However, we were dismayed to see SO MUCH Caffeine in this supp. As the optimal dose is 150-200mg, the 300mg in ON Pro Pre is too much – and you may experience pre-workout jitters as a result.

Meanwhile, L-Leucine is unnecessary in a pre-workout. This is because its role is to help repair damage to muscle tissue DURING and AFTER exercise – not before.

At first, we were pleased to see Ashwagandha in this supp. After all, it’s a well-known adaptogen proven to boost endurance.

However, this supp contains just 300mg of this herb. And as the optimal dose is 2000mg, it won’t help produce the kind of results you want.

At first, ON Pre Pro looked like a 4* product – especially considering the price ($32.99). On closer inspection, it contains too many unnecessary or unproven ingredients – and way too much Caffeine.

With this in mind, we recommend that you invest a little extra in a better-researched and more effective pre-workout supplement.