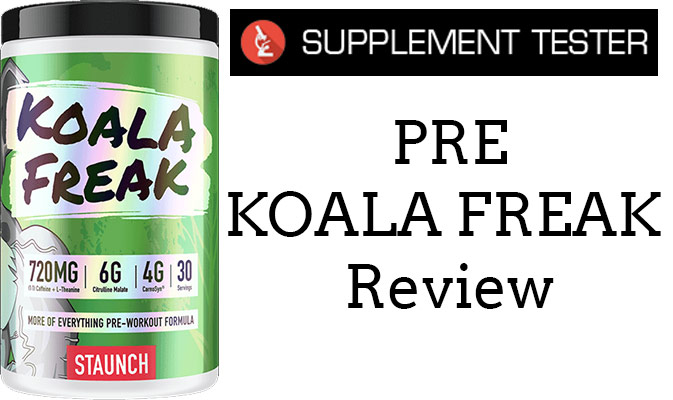 Some of our favorite products aren’t found in retailers. So when we see other products that are only offered from direct websites, we always take a look – this is when we bumped into Pre Koala Freak.

The website it’s sold on is very appealing and shows you exactly what you’re looking for. You’ll be surprised at how many bad websites we’ve had to deal with – so this is a nice change.

Before we take a look at Pre Koala Freak’s nutrient profile, we’ll tell you a bit about the company first. Take a look:

This pre workout is made by Staunch Nutrition. But when trying to find out about the company, we weren’t impressed.

While their advertising page for Pre Koala Freak was very good, Staunch Nutrition’s ‘About Me’ page only offered these words: “staunch (adj) – firm or steadfast in principle, adherence, loyalty, etc…as a person”

We don’t believe this single quote is enough information about this company…but we also believe it’s a new supplement brand, so hopefully they’ll update this page too. We all had to start somewhere…

The thing that attracted us to Pre Koala Freak was that it contained an optimal dosage of Citrulline Malate. You’ll be suprised by how many pre workouts contain underdosed nutrients, and as you need 6,000mg of this Citrulline Malate, this is usually the ingredient that takes the biggest hit.

But before taking a look at the ingredient list, we weren’t sure what else was inside. After counting all the ingredients, we found that Pre Koala Freak contains 13 nutrients – that’s a lot for 1 pre workout…

However, usually the problem with pre workouts that contain over 10 nutrients is that they underdose ingredients. This doesn’t seem to be the case with Pre Koala Freak; so it’ll be interesting to see how effective this pre workout is. 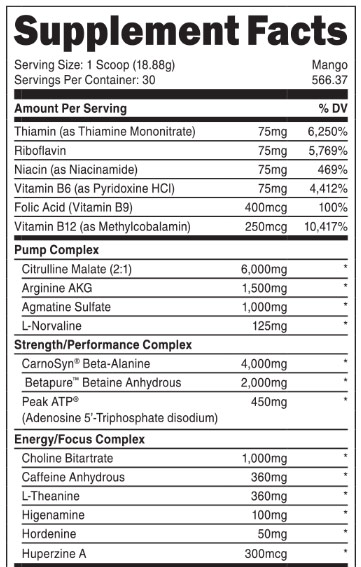 As we’ve mentioned, this is the reason why we decided to test this pre workout today. We’re glad that Pre Koala Freak contains an optimal dosage of Citrulline Malate (6,000mg per serving).

This means you’ll be sure to experience better muscle pumps in the gym. Trust us, if you want crazy pumps, then this is the nutrient you need.

If you’re not sure what this is; AAKG is simply the salt extracted from Arginine. It’s believed to improve your muscle pumps in the gym, but no studies have actually proven that it works.

Ultimately, this makes AAKG an unreliable nutrient in Pre Koala Freak. We prefer tried-and-tested ingredients, so this doesn’t tick the right boxes for us.

In fact, it’s probably worth mentioning that anything containing or extracted from Arginine isn’t shown to be effective. Here’s why: Arginine has a poor absorption rate, meaning it’s ineffective when orally supplemented.

For this reason, Citrulline Malate is your best option – it converts into Arginine once in your kidneys, so there’s no problem with Arginine’s poor absorption rate.

Like AAKG, this is derived from Arginine – meaning it’s not likely to work. And after checking the scientific studies conducted on this nutrient, these have proven that it doesn’t work.

It’s strange that Staunch Nutrition did their research to dose Citrulline Malate correctly – but then decided to add mostly ineffective ingredients afterwards.

Hopefully this is a genuine mistake by a new company (instead of them trying to cut costs while still raising the price of Pre Koala Freak).

This is an amino acid that’s beleived to improve your muscle pumps. Basically, there’s alot of ‘broscience’ behind this nutrient – but no studies have backed up these claims.

As a result, L-Norvaline is an unreliable nutrient in Pre Koala Freak. Again, we’ll repeat that we prefer tried-and-tested nutrients in products we buy.

This is probably the most controversial ingredient in the supplements industry. Some people hate Beta-Alanine, while others love it.

In a nutshell, it’s shown to improve your muscular endurance in the gym. But on the other hand, it’s proven to cause a side effect called paresthesia.

What’s paresthesia? Answer: a tingling on the skin of your face, chest, hands. and extremities.

What do we think of it? We’ve experienced paresthesia before and it’s like a constant ‘pins-and-needles’ sensation. It’s not comfortable while trying to lift weights and we don’t think taking Beta-Alanine is worth it for this reason.

Also known as Trimethyglycine, this is a metabolite of choline – which isn’t a good thing. Basically, both Betaine and Choline haven’t shown to do much in many studies.

But they’re known for a bad reason – they cause fishy odors in your breath and sweat. Not only that, it hasn’t shown to deliver any benefits in studies.

As a result, there’s no point in consuming Betaine – unless you want to smell fishy…

If you’re not sure what this is, we won’t waste your time going into the details. Why? Because it doesn’t work.

The good news is that it hasn’t been reported to cause side effects either. Let’s move on.

As we’ve mentioned with Betaine, Choline can also cause fishy odors in your breath and body secretions. And it doesn’t help improve your workout either.

This is the best stimulant you can find in supplements; it’s shown to be safe and effective when consumed under dosages of 200mg per serving.

After looking at Pre Koala Freak’s nutrient profile, you should see the problem; there’s a 360mg dosage of caffeine in this pre workout.

As a result, this might cause you side effects (which we’ll expand on in the next section).

We’re impressed that Staunch Nutrition did their research and added L-Theanine here. Basically, L-Theanine is naturally found in green tea; if you’ve ever wondered why you get more of a ‘focused buzz’ when drinking green tea, then we’ll explain below.

In a nutshell, L-Theanine is a relaxing agent that helps you stay calm while benefiting from caffeine. While this can’t prevent side effects when caffeine is overdosed (like in Pre Koala Freak), it can boost the effects of caffeine in smaller dosages.

This is great for supplement companies; it means they can add less caffeine while experiencing the same benefits.

All you need to know is that Higenamine hasn’t proven to work. As a result, it’s an ineffective nutrient in Pre Koala Freak. Let’s move on.

Hordenine is believed to improve the rate at which you burn fat. But no studies have actually shown whether it works or not.

We don’t like this; we prefer knowing whether it’s 100% safe, or whether it causes side effects – so you’re at least prepared for them if you do consume it.

We’ll wait for more studies to be conducted on this nutrient before giving it a proper rating.

This is a cognitive enhancer that’s shown to reduce the rate of cognitive decline linked with aging.

However, the problem is, Huperzine A’s shown to cause numerous side effects. Not only that, it’s more suited to Nootropic supplements – although we wouldn’t recommend taking this nutrient due to the unwanted effects it can cause. 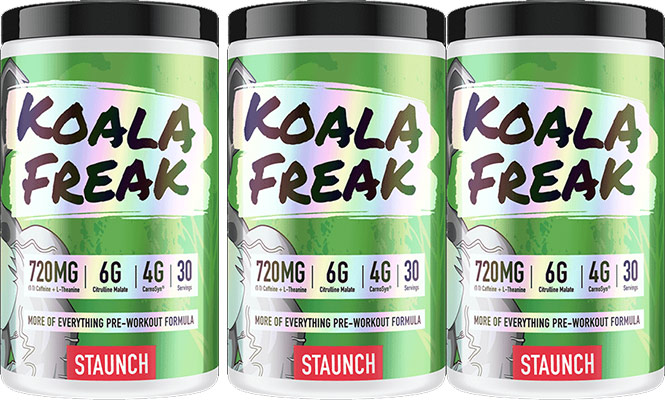 As we’ve mentioned, taking Pre Koala Freak might lead to you suffering from unwanted side effects. It contains Betaine and Choline (which have shown to cause fishy odors in your breath and body secretions), as well as Beta-Alanine, which is well known for causing paresthesia.

For those that skipped the above section; paresthesia is a tingling on the skin of your face, chest, hands and extremities. We don’t enjoy this side effect, which is why we avoid this ingredient.

Not only that, the high dosage of Caffeine (360mg) can cause jitters and crashes. We recommend consuming under 200mg per serving – especially if you’re sensitive to this stimulant.

Anyway, we’ll list the side effects you can suffer from:

Not what you’re looking for? See our
– Top 3 Pre Workout Supplements Page –

If Staunch Nutrition is a new company, then this is a very good effort at a pre workout supplement. We all start somewhere, and we believe this company will produce some great supplements in the future.

However, they’ve not perfected the pre worout with Pre Koala Freak here. Although they’ve dosed Citrulline Malate well and included the smart caffeine combo – this supplement also contains ingredients that can cause side effects (as well as ineffective ingredients).

As a result, we recommend that you check out the highest rated pre workouts on the market instead – to make the most of your cash.