Prep is a pre-workout supplement marketed by Carbon. It comes in two flavors – Cranberry Grape and Fruit Punch.

We’ll go through Prep’s ingredients list, so you know exactly which ingredients work, and which ones don’t. 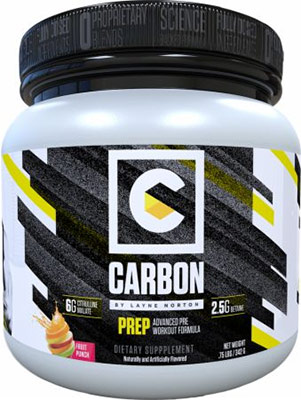 Carbon is a brand owned by a supplements company called BioLayne. Apart from that, there isn’t much informational available online.

It’s great to see a pre-workout that shows you the exact amount of each individual ingredients, instead of hiding them in blends. What’s even better is that Citrulline Malate has been dosed perfectly.

It’s looking good for Carbon’s product – but let’s take a closer look at Prep’s contents and see whether they’re effective in a pre-workout supplement. 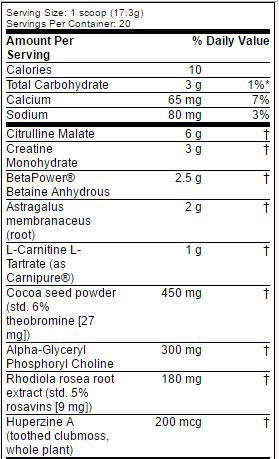 This is one of the best ingredients in Prep. It’s an amino acid that’s turned into L-Arginine in your kidneys, where it boosts your nitric oxide levels. From there, your body’s blood vessels dilate (vasodilation), which increases your blood flow – ultimately, this results in you experiencing intense muscle pumps in the gym.

Carbon has clearly done their research into this ingredient, as it’s dosed perfectly. The optimal dose of Citrulline Malate is between 6,000mg-8,000mg – Prep contains 6,000mg, so you’ll be sure to see the difference when lifting weights in the gym.

Creatine Monohydrate is the most effective form of creatine. It works by rapidly producing energy called ATP, which results in you experiencing boosts in strength and endurance during your workout.

This ingredient has also been well dosed at 3,000mg (it’s safe to consume up to 10g per day for those with high muscle mass).

This is the first mistake by Carbon when looking at Prep’s ingredient list. Also known as Trimethylglycine, it’s been added into this pre-workout as it’s believed to improve endurance (anaerobic running capacity).

However, studies have shown that it doesn’t provide this benefit. It also comes with a strange side effect – it’s been known to cause fishy odours in the breath and body secretions.

The only positive about this ingredient is that it’s been clinically dosed at 2,500mg – but ultimately, it’s ineffective in providing any benefit to boost your training session.

This is a used used in traditional Chinese medicine that’s believed to increase lifespan. Astragulus Membranaceus is an effective diuretic, meaning it helps reduce bloating by increasing urine urine production.

Carbon has included this ingredient to counteracts the belief that creatine causes bloating. However, this is a myth – studies have shown that creatine doesn’t significantly increase body water enough to cause bloating.

The main concern about this diuretic is that you may suffer from severe dehydration, if you don’t increase your water intake enough.

Also known as LCTC, this is the form of L-Carnitine that’s most commonly used to boost strength in the gym. It also improves mental function (memory and reaction time).

There’s no negatives to having this ingredient in a pre-workout, and it’s clinically dosed in Prep (1,000mg) – optimal doses of this ingredient are between 500mg-2,000mg.

However, studies have shown that this ingredient doesn’t alter sporting performance.

This is used in supplements as it’s shown to cognitive decline and enhance growth hormone production, which improved strength.

However, here’s the problem with Prep – studies have shown that it’s most effective in 1,200mg doses divided into three servings throughout the day.

There’s no evidence to suggest that consuming the amount of Alpha-GPC in this pre-workout (300mg) will improve growth hormone production.

Also, it’s been known to cause side effects, such as heartburn, headache, insomnia, dizziness, skin rash, and confusion.

This is one of the best ingredients in a pre-workout, and can make the difference between an average, and a quality supplement. Rhodiola Rosea is proven to significantly reduce the effects of prolonged and minor physical exhaustion, and therefore fatigue.

But that’s not all – it also improves mental function (memory and reaction time). You can’t argue against this ingredient – it’s effective in doses as little as 50mg.

This ingredient is a compound extracted from herbs (Huperziceae variety). It’s believed to enhance mental function (memory and reaction time).

However, Prep already contains Rhodiola Rosea, which is a great cognitive booster (Rhodiola Rosea also reduces fatigue) – so there’s no need for Huperzine A to be in this pre-workout.

It’s more suited to a Nootropic, as it doesn’t offer any benefits apart from improving mental function. 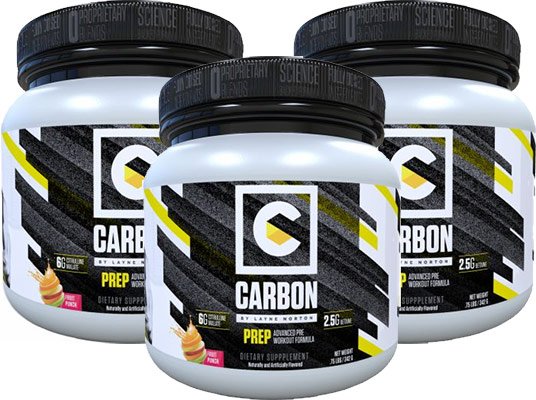 Carbon have done a good job for the most part, but they should’ve left Astragalus Membranaceus out (as it can cause dehydration). Also, they added Caffeine and L-Theanine, it would’ve been one of the best pre-workouts on the market.

There are two concerns we have about this product – Carbon have added a diuretic (Astragalus Membranaceus) alongside Creatine Monohydrate – you already need to increase your water intake when consuming creatine as it pulls water into your muscles.

You’d need to increase your water intake even more due to also consuming a diuretic – those that aren’t aware of this would be in danger of becoming severely dehydrated.

The other is the side effects that Alpha GPC can potentially cause, like heartburn, headache, insomnia, dizziness, skin rash, and confusion.

Here’s a list of the potential side effects from taking Prep:

However, it’s frustrating that Prep contains a diuretic alongside Creatine Monohydrate. This is a problem. Those that aren’t aware of all this pre-workout’s ingredients may not be aware that they’d have to significantly increase their water intake – meaning they’d be in danger of becoming severely dehydrated when taking this product.

Still, you can’t avoid the great ingredients in this supplement, and regardless of the potential side effects, we’re giving Prep a 4 star rating. Many pre-workouts claim to deliver clinically dosed ingredients, but it’s rare to see a supplement that actually does.

A pre-workout supplement that contains the key ingredients of Prep (Citrulline Malate, Creatine Monohydrate, Rhodiola Rosea, L-Carnitine), with Caffeine and L-Theanine included*, would be the best on the market.

*Caffeine and L-Theanine work in synergy to form a ‘smart-caffeine’, delivering benefits like improved strength, endurance, and mental function (memory and reaction time), without the risk of side effects like jitters, energy crashes, and upset stomachs.