PreSeries Bulk is a pre-workout supplement from Transparent Labs. It comes in 30 serving containers at $49, so it’s one of the higher-priced supplements we’ve seen.

This product is available in two flavors – Blue Raspberry and Green Apple.

Strangely for a pre-workout, there’s no mention of boosts in energy levels, strength, or endurance – these are the key benefits most look for in this type of product.

Instead, the guys at Transparent Labs focus on their Testosterone support complex, and on promoting PreSeries Bulk as a ‘bulking’ aid.

This company is proud that it doesn’t use proprietary blends in its products – something we’re fully behind.

Transparent Labs also only sells its supplements on its website, so you won’t find PreSeries Bulk on Amazon, GNC, or Vitamin Shoppe.

The brand also claims to use only “science-based ingredients at clinically effective dosages.” So let’s see whether PreSeries Bulk lives up to these standards…

One thing we like about PreSeries Bulk is that it doesn’t contain any properietary blends – so you know exactly what you’re getting.

And on another positive note, this product contains an optimal amount of Citrulline Malate, which is a key ingredient in any pre-workout. 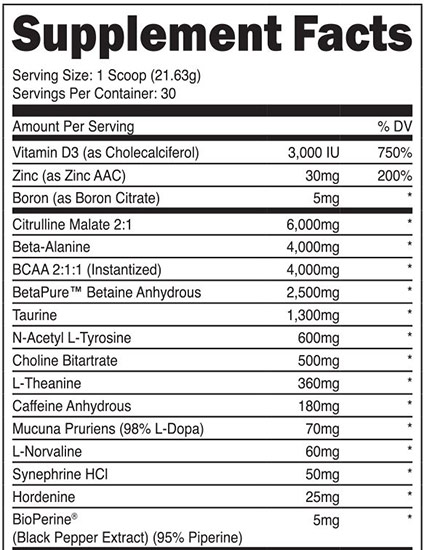 It’s strange that Transparent Labs uses this in PreSeries Bulk. After all, a boost in T-levels isn’t what most lifters look for in a pre-workout.

There are already top quality T-Boosters on the market. So if you want to increase your testosterone, you should check out Our Top Rated Testosterone Boosters.

Let’s take a look at how these ingredients shape up…

This is a key ingredient in a testosterone booster, but here’s the problem…

Vitamin D3’s only delivers its benefits when you take it in daily doses of 3332-5000 IU. The amount in PreSeries Bulk falls just under this range.

And as you only take this supplement once a day, it won’t give your body the optimal levels of Vitamin D3 you need to make a huge difference.

Zinc is another great T-Boosting ingredient, but the TUL (tolerable upper limit) is 40mg. The 30mg dose of Zinc in PreSeries is very close to that limit.

So those sensitive to – or consuming foods high in – Zinc may experience nausea, vomiting, diarrhea, or other side effects.

But while that’s true, it doesn’t tell you that research on Boron’s T-boosting ability is unreliable.

A key pre-workout ingredient, Citrulline Malate’s proven to deliver intense muscle pumps in the gym. How?

Well, it turns into L-Arginine in your kidneys, which raises your nitric oxide levels. From there, your blood vessels dilate (vasodilation), and your blood flow increases. And this results in better, more satisfying muscle pumps while you lift weights.

But why not take L-Arginine directly? Because L-Arginine has a poor absorption rate, meaning your body doesn’t make use of it when orally ingested.

Transparent Labs has done well by including an optimal dose of Citrulline Malate (6000mg). We recommend looking for a dose between 6000mg-8000mg for the best results.

Transparent Labs has made a mistake here. While Beta-Alanine could enhance muscular endurance, it can also cause paresthesia.

Paresthesia is a tingling on the skin of your face, chest, hands, and extremities. And while this isn’t life threatening, it may ruin your gym session.

Made up of three Branched Chain Amino Acids, Leucine, Isoleucine, and Valine.

They’re cheap to buy and take separately, so you don’t really need them in a pre-workout.

So while BCAA do offer some benefits, they’re not vital pre-workout ingredients. Something like Creatine Monohydrate is more suited to this type of supp.

This is one of the worst ingredients in PreSeries Bulk. No studies show it provides any benefits, and worse – it’s known to cause fishy odors in your breath and body secretions.

It’s not worth suffering this side effect and handing over your cash for such a pointless ingredient.

This is an organic acid containing sulfur, and is most commonly used to reduce cramping. Due to its presence in energy drinks, many assume Taurine boosts energy, but this isn’t the case.

There are no downsides to taking Taurine, but we’d prefer to lose it and make room for another ingredient in this supp. For example, Beetroot Extract promotes muscle pumps by raising nitric oxide levels, and is much better suited to a pre-workout.

N-Acetyl L-Tyrosine (NALT) is a more soluble version of L-Tyrosine, an amino acid.

NALT enjoys a big reputation as a nootropic (brain booster) and de-stressor. But where’s the proof?

Well, a trio of studies on military personnel show NALT may reduce the symptoms of acute stress. And as stress can hamper your workout, it’s easy to assume NALT supplementation does the opposite.

However, NALT does not appear to affect workout performance.

You’ll find large amounts of Choline in eggs (particularly the yolk). As an essential nutrient, Choline plays a key role in the function of the liver, nerves, muscles, energy levels and more.

But as a pre-workout ingredient? It’s not great. In truth, a number of studies show Choline does NOT improve cognition, fatigue, reaction time, training volume, or much else.

And while you need the nutrient in your diet, taking Choline in a supp can cause your breath and body odor to smell like rotten fish.

Transparent Labs has clearly done its research, as L-Theanine is a great pre-workout ingredient. Here’s why – L-Theanine enhances the benefits of Caffeine without increasing the risks of side effects like jitters or energy crashes.

One of the most beneficial and safe ingredients to have in a pre-workout, Caffeine improves strength, endurance, and cognition (alertness, focus, reaction time).

Transparent Labs has done well here. The best dose of Caffeine per serving is 150-200mg, so you experience the benefits without risking side effects like jitters or energy crashes. Even those sensitive to Caffeine won’t experience any negatives with a dose between 150mg and 200mg.

Also known as Velvet Bean, Mucuna Pruriens is a bean that’s itchy to the touch.

Transparent Labs claims to include it for its “psychological and physical benefits to athletes.”

And it does appear to increase levels of dopamine (a feel-good chemical) enough to boost fertility and testosterone, as well as subjective well-being. Yet there’s not enough evidence to suggest it directly affects workout performance.

Mucuna Pruriens boosts testosterone, which is why you’ll find it in at least one of our Top Three T-boosters. But it may be wasted in this pre-workout.

L-Norvaline is an amino acid that appears to be a modified form of L-Valine. It enjoys a growing reputation in the fitness world.

But despite the positive available research, there’s still not enough to prove the efficacy of L-Norvaline beyond doubt.

Also known as Bitter Orange Peel, Synephrine has been known to cause harmful side effects – it’s even banned in the UK and Australia. Despite this, companies add Synephrine to their supplements for its ability to boost fat loss.

But here’s the problem – fat loss isn’t important in a pre-workout supplement.

Besides, there are already top-quality fat burners on the market, so there’s no need for a pre-workout to contain fat burning ingredients – especially one as potentially harmful as Synephrine.

Hordenine is a molecule found in a wide range of plants. It has a similar structure to Synephrine – which worries us because Synephrine has links to a number of health issues.

Research is currently assessing Hordenine’s fat-burning ability. But as far as we can tell, it has very little use a pre-workout ingredient. As Transparent Labs claims to use only proven ingredients, it’s sad to find such an understudied ingredient in this supp.

BioPerine is a patented form of Piperine (or Black Pepper Extract). It’s main role in any supp is to help the body better absorb different nutrients. But as this this supp contains some potentially unsafe or pointless ingredients, the use of Black Pepper may be a cause for concern. 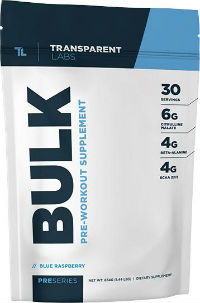 There are a few ingredients in PreSeries Bulk that can cause side effects – Beta-Alanine, Betaine, and Synephrine.

Here’s the list of potential side effects from using PreSeries Bulk:

Not what you’re looking for? See your best options in our
Top 3 Pre Workout Page

There’s a weird mix of great ingredients, along with ineffective ingredients that can cause side effects in PreSeries Bulk.

The guys at Transparent Labs have clearly done their research, as they’ve added the ‘smart-caffeine’ combo of L-Theanine and Caffeine.

This delivers all the benefits of Caffeine, while also reducing the risks of side effects like jitters and energy crashes.

However, they’ve also added Synephrine, which is banned in the UK due to concerns about harmful side effects.

Betaine is another questionable choice, as it’s not shown to provide any benefits in any study. Betaine also causes fishy odors in your breath and body secretions, which isn’t pleasant.

Transparent Labs nearly got it right, but still fell short with PreSeries Bulk.

We recommend you look for a pre-workout that’s free from side effects, and includes more key ingredients like Creatine Monohydrate and Beetroot Extract.