Mr Hyde NitroX is another product in a line of pre-workout supplements from ProSupps.

We reviewed the company’s Mr Hyde pre-workout back in 2016 and loved it – so we wanted to check out how its successor compares.

Mr Hyde NitroX is available for around $30 for 30 servings, which makes it quite a bit cheaper than some of the best pre-workouts we’ve tried.

Is this a sign the guys at ProSupps have dropped the ball by replacing Mr Hyde with Mr Hyde NitroX? Let’s find out…

ProSupps claims to pursue “an aggressive, outgoing research and development program”. This allows them to provide a “unique and cutting edge product assortment.”

Most of the differences between this and plain old Mr Hyde lie in strength – the marketing for some of ProSupp’s NitroX products boasts that they’re “stronger than ever”.

And the first thing we notice about Mr Hyde NitroX is that it’s packed full of Caffeine!

While that may be no surprise considering it’s marketed with stim junkies in mind, it’s still three times what you’ll find in our favorite pre-workout.

Beta-Alanine is well-regarded for its ability to reduce fatigue and boost endurance – and it’s one of the best amino acids for this purpose.

Its active ingredient is carnosine, which slows the build-up of hydrogen ions and gives you more power in the first 1-4 minutes of exercise.

However, Beta-Alanine does the same job as Creatine in a pre-workout.

And as this supp contains plenty of Creatine, ProSupps could’ve left out Beta-Alanine and passed the savings on to the customer.

In addition, Beta-Alanine also causes itching/tingling in many users – and you may find these sensations unpleasant.

Creatine is a welcome addition in any pre-workout. Its job is to turn stores of adenosine triphosphate into the cells of your brain and muscles.

In other words, it plays a vital role in your ability to move and function. In the weight room, it helps increase lean muscle mass and gives you more power.

As we’ve said many times in our reviews, we prefer Creatine Monohydrate to the HCL version. Granted, HCL is more soluble, which could make it quicker to mix the powder.

But Creatine Monohydrate is proven to work and has been a staple of lifters’ pre-workout regimes for decades. By contrast, there’s much less research on the benefits of Creatine HCL.

With this in mind, we’d prefer to stick with what we know works.

Arginine is an amino acid which improves blood flow and boosts levels of nitric oxide in your system. This may give you the intense muscle pumps you crave during your workout.

But the use of Arginine in Mr Hyde NitroX puzzles us.

Because L-Ctrulline is known to convert to Arginine in your kidneys.

And as your body naturally absorbs L-Citrulline much better and faster than Arginine, there’s no need to include the latter. If only there was enough L-Citrulline in this supp…

L-Citrulline is an amino acid found in watermelons, pomegranates, walnuts and more. It dilates the blood vessels allows more vital nutrients to flow to your muscles for better pumps.

But the ideal dose of L-Citrulline is 6000mg. When we increased the dose to this level, this not only boosted our endurance, but also made our muscles look larger than ever before.

On 6000mg, we also felt AMAZING. And in our experience, any less than 2000mg of L-Citrulline just won’t cut it.

That said, the 500mg of L-Citrulline we found in Mr Hyde NitroX left us wanting more.

Caffeine is very popular in pre-workouts.

And given its proven ability to give you pinpoint focus, ramp up your energy levels and send your motivation into overdrive, we’re not surprised to see it in ProSupps’ Mr Hyde.

But there’s just SO MUCH of it…

However, we notice that Mr Hyde contains 300mg of Caffeine Anhydrous – which is double the amount you’ll find in our favorite pre-workout. And that not’s all…

Di-Caffeine Malate is a mix of caffeine and malic acid.

This in turn ramps up energy and motivation, which makes it perfect for mixing with L-Citrulline (to make Citrulline Malate).

However, as Caffeine’s main function is to boost your energy levels, the addition of Malic Acid seems excessive.

Either way, there’s very little published scientific info on the efficacy of Di-Caffeine Malate. And as a result, we don’t advise taking it.

Citric Acid is a compound your body naturally creates – and your cells need it to produce energy.

It’s often used both as a flavoring agent and a preservative. In the case of this supp, we suspect it’s used to give you even more energy than the extra Caffeine Anhydrous in this blend provides.

But as there’s so much Caffeine in supp already, the extra dose seems extreme.

Naturally found in eggs (specifically the yolk), Choline enjoys a big reputation as a cognitive enhancer. Rumors suggest Choline may help you focus better in the weight room.

However, there’s very little scientific proof that Choline has any use for this purpose.

Besides, we always advise avoiding Choline because it can make your breath and body secretions smell like rotten fish.

Theanine is a calming agent that works alongside Caffeine to give you all the focus, energy and motivation the stimulant provides – just without the unpleasant crash.

A glance at the original Mr Hyde formula shows ProSupps have replaced Hordenine (in the old formula) with Theanine in this new one. This is wise because Theanine works much better with Caffeine.

But here’s the issue…

This supp doesn’t contain anywhere near enough Theanine to produce the desired results. In our experience, the best pre-workouts contain MORE Theanine than Caffeine.

N-Acetyl Tyrosine (NALT) is a more soluble variant of L-Tyrosine. This amino acid has links to the production of feel-good chemicals like dopamine and adrenaline.

As positive feelings are said to boost muscle growth and improve focus, Tyrosine may seem like a miracle drug at first glance.

Despite this, more research is required to prove beyond doubt that NALT has a direct effect on the levels of these feel-good chemicals in your body.

Until this time, we don’t recommend taking it.

Not content with the large dose of Caffeine in this supp, ProSupps have ANOTHER stimulant to Mr Hyde NitroX – Theacrine.

Having tested many different pre-workouts in our time, we can you tell you 150-200mg of Caffeine is the only stimulant you need to get the results you want.

For this reason, the addition of Theacrine is overkill – and it puts you at risk of that uncomfortable jittery feeling you get from taking way too much of any stimulant. 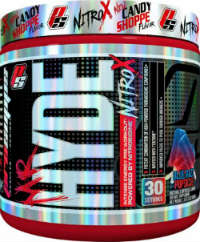 As you’d expect from a company with ProSupps’ reputation, Mr Hyde NitroX is safe.

However, the large dose of Caffeine (in addition to Theacrine) could make you anxious and give you a headache.

Choline Bitartrate may also give you fishy breath and body secretions.

We were disappointed with Mr Hyde NitroX. While we loved the first version of Mr Hyde, one the issues with it was that it had too much Caffeine (419mg).

And while NitroX has less (410mg), this is still WAY too much. This is especially true when you consider ProSupps have added Theacrine (another stimulant) to the mix.

We were pleased to see the Hordenine (in the old version) of Mr Hyde replaced with Theanine in NitroX.

But our experience tells us you need more Theanine than Caffeine to help avoid a pre-workout crash.

So in a supp containing 419mg of Caffeine, the 50mg of Theanine in Mr Hyde NitroX just isn’t enough.

On reflection, we wouldn’t give Mr Hyde (the old version) such a good review now – especially considering superior pre-workouts have come on the market since then.

So while Mr Hyde NitroX does improve on the old Mr Hyde formula in some ways, we can’t recommend it.

Instead, look for a pre-workout with less Caffeine (150-200mg) and more – or better versions – of the proven ingredients in this supp.