Maker Insane Labz says its Psychotic “isn’t your average pre-workout supplement.” Now we’ve heard that before, but we’re willing to give it a shot.

The Psychotic pre-workout claims to:

Now, we know some people use pre-workouts to keep them alert when tired.

But aiming this product at students and the 9-5 workforce dilutes the brand message – after all, getting psychotic in class or at the office is not something any sane person would advise.

So the horror theme is certainly different – but does it work? Find out in our Psychotic pre-workout review…

The Insane Labz doesn’t tell us when the brand started, or whether its a subsidiary of another company.

But we can tell you that it was started by CEO, Dustin Lebleu, who runs over 30 brands under the Insane moniker, including a movie production company, a music company, and a clothing brand.

After a little digging, it’s also clear all Insane Labz products are made in a GMP-certified facility – which is nothing new.

Devising great supplements takes expertise, time and a hell of a lotta work. But as the CEO appears to have fingers in so many ‘insane’ pies, we’re a little concerned the eye-catching branding is a sign of style over substance.

Psychotic Pre-Workout Ingredients and How They Work

The Psychotic pre-workout contains eight ingredients, all of which are part of the “Psychotic” proprietary blend. As a result, you can see which ingredients it uses, but not how much.

This not only stops you from seeing how much you’re paying for; it also increases the risk of side effects.

And while Psychotic does use at least a couple of key pre-workout ingredients, we’ve also spotted a few we’d prefer never to put in our bodies. 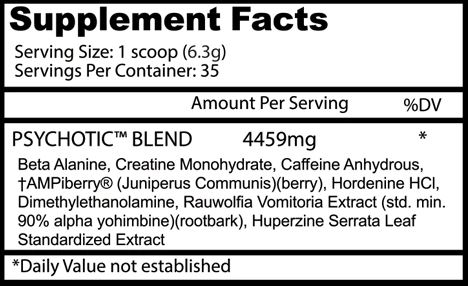 Beta-Alanine can increase muscular endurance and improve workout performance. Despite this, it’s fair to say we don’t like the amino acid.

Why? Because it can cause paresthesia. This is the itching or tingling sensations that many lifters describe as the feeling of “bees crawling on my skin.”

While paresthesia is harmless, we’ve found these sensations very distracting; some gym rats even say it ruins their workouts.

Creatine is arguably the safest and best-researched ingredient in the world of fitness and nutrition. Your body produces Creatine. This is just as well because without the molecule, you couldn’t walk, run, or even function.

When you workout, your body uses up its supply if Creatine faster the normal. This is why supplementation is so important for effective workouts.

In all years testing pre-workouts, we’ve found you need at least 1g (1000mg) of Creatine to get the best results from supplementation. But as the proprietary blend gives us no dose info, there’s no way of knowing whether it’ll work or not.

Caffeine is a fantastic stimulant – and an important part of any good pre-workout. You probably know it can improve focus.

The stimulant works by inhibiting the adenosine receptors in the brain, which allows more dopamine and adrenaline to flow through your bloodstream, so you stay alert.

As long as you make sure you consume 150-200mg of Caffeine (preferably in a blend with L-Theanine), you should avoid energy crashes and those jittery feelings that can call a premature halt to your workout.

But due to Insane Labz’s use of a proprietary blend, we can’t tell how much Caffeine it contains.

A lot of products contain large amounts of Caffeine to give you a big energy spike that makes it seem more potent than it is.

So does Psychotic contain a massive hit of the stimulant that’s bound to make you feel jittery, or does it use an amount so small that it’ll make your workout fall flat? No-one knows – and that’s the problem.

AMPiberry is a trademarked form of Juniperus Communis Berry (or just Juniper Berry).

This ingredient is often used to treat urinary tract infections, diabetes, and cancer. But we can’t figure out why anyone would think it a good idea to use it in a pre-workout – not even the product website offers an explanation.

It’s possible the guys behind Psychotic included Juniper Berry Extract for its supposed ability to reduce muscle pain, but there’s no evidence it has the power to do this.

Since no research shows any useful link between Juniper Berry and workout performance, it’s safe to say it’s useless – and a pointless addition to the Psychotic pre-workout.

Hordenine is a compound that’s found in several foods said to burn fat. It has a similar structure to Synephrine (aka Bitter Orange), which is possibly unsafe – and an ingredient to avoid.

We’ve seen Hordenine in a couple of fat burners before, but this has to be the first time we’ve seen it in a pre-workout.

In truth, Hordenine is an underresearched ingredient and there’s no evidence to show it has any place in this supplement.

Dimethylethanolamine (DMAE) is a Choline precursor which is said to slow down cognitive decline with age.

We’ve also seen it in some pre-workouts, which is probably due to its supposed ability to increase energy levels and speed up recovery.

But this is another ingredient we recommend avoiding.

This is because not only is there no proof of DMAE’s ability to provide the benefits described above; it’s also teratogenic, which means it can cause birth defects in unborn children – something to consider if you want to have a child.

We’ve been seeing Rauwolfia Vomitoria Extract in a lot of supplements lately – which is unfortunate (read on to find out more).

Also known as Poison Devil’s Pepper and African Serpentwood, Rauwolfia is used to treat everything from cancer to snakes, and even mental health. Despite this, there’s not enough evidence to prove this either way.

And there’s certainly no proof Rauwolfia Vomitoria has any use in a pre-workout.

But even more worrying are the links between Rauwolfia and a long list of side effects. These include low blood pressure, dizziness and stomach problems.

This active ingredient is used for increasing alertness, mental function and energy in those with Alzheimer’s disease and certain muscle conditions. However, there’s no evidence it does the same for healthy people.

Plus, when used to treat certain conditions, Huperzine A is extracted and highly purified. But as Psychotic uses the whole plant leaf, rather than the treated active ingredient, the benefits are likely to be minimal.

When used for less than three months, Huperzine A is safe to use. However, there are some concerns it may cause side effects if you use it for longer. 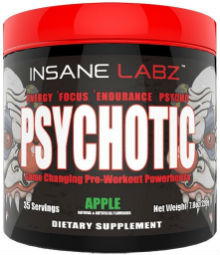 Of Psychotic’s eight ingredients, it contains five that may cause unpleasant side effects. These include:

As we come to the end of our Psychotic pre-workout review, It feels like an understatement to say Psychotic is not a good pre-workout.

Yes, it contains Creatine and Caffeine, which are two ingredients we see time and time again in the best pre-workouts on the market. But that’s it for the good stuff.

Earlier, we pointed out that Insane Labz is one of many brands run by the guys behind it – others include film and clothing companies.

And to be honest, Psychotic does seem like its made by someone who only cares about branding. And predictably, the interesting ‘psychotic’ picture on the bottle is as good as this supplement gets.

Everything from the proprietary blend, to the use of FIVE possibly unsafe ingredients/doses makes Psychotic a pre-workout we wouldn’t usually touch – and we also recommend you stay well away from it.

Psychotic is also just one huge proprietary blend – this is a shallow-marketing trick that takes you for a fool. These blends allow manufacturers to release products with sub-optimal doses, and to ram their products with weak, or ineffective ingredients.

What to look for instead

Bypass all pre-workouts with proprietary blends – you need dose info to be sure the supp you choose is both safe and effective. And to ensure you get the best value for money, look for a pre-workout with ALL natural ingredients at the right doses.