This product is marketed as a “fully transparent and clinically dosed” pre-workout, so lets analyze its ingredients to see whether it lives up to the claims. 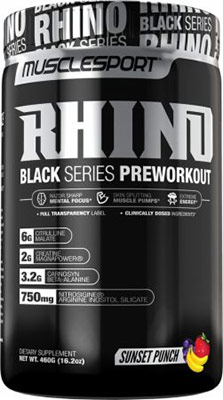 MuscleSport International are a supplements company that prides itself on it’s premium products, created with their “heart and soul”. They offer range of supplements, from protein powders to pre-workouts.

It’s refreshing to see a pre-workout that doesn’t hide any of it’s ingredients from you. MuscleSport International have provided the exact amounts of each individual ingredient contained in Rhino Black – so you can check its effectiveness overall.

Rhino Black also has a huge nutrient profile, but having more ingredients isn’t always better. Lets see whether MuscleSport International have included optimal levels of each ingredient, and if they’re all beneficial.

This is the first blend in Rhino Black, but unlike other blends, each ingredient’s quantity is clearly shown on the ingredients list – this means that you know exactly what you’re getting.

Let’s take a look at all the ingredients in this blend:

MuscleSport International has gotten off to a great start by including this in Rhino Black. L-Citrulline turns into L-Arginine in your kidneys, where it raises your nitric oxide levels, which in turn increases your blood flow, delivering great muscle pumps in the gym.

Rhino Black also contains an optimal amount of L-Citrulline at 6,000mg (between 5,000mg-8,000mg is optimal), to ensure that you experience these benefits.

On your search for a quality pre-workout, you should definitely look out for products that contain 5,000mg-8,000mg to feel intense muscle pumps during your training session.

Also known as Betaine, it’s a component of Beetroot and is used to reduce homocysteine (homocysteine is a naturally occurring amino acid that can cause health problems).

However, MuscleSport International have included Betaine in their pre-workout, as it’s also been shown to minimally benefit physical performance in doses of 2,500mg-6,000mg.

The problem with Rhino Black is that the 1,500mg (1.5g) dose of Betaine contained isn’t enough to deliver enhances physical performance – Betaine has been seriously underdosed in this product.

This is derived from L-Arginine through the removal of an acid group (decarboxylation), but doesn’t have any part in raising your nitric oxide levels. Instead, Agmatine has been proven to reduce pain and treat depression, as well as improve mental function (memory and reaction time).

This has clearly been included in Rhino Black to improve your focus in the gym, but it’s only shown to boost mental function in doses between 1.6mg-6.4mg. However, this pre-workout only contains 1g of Agmatine, so you won’t experience this ingredient’s full benefits.

MuscleSport International should’ve increased the amount of Agmatine in this supplement, to provide you with enhanced mental function.

This is an organic acid containing sulfur and is found in high amounts in meats. It’s most commonly used to reduce cramping, due to its ability to improve blood flow.

Although it’s not key to a quality pre-workout, it definitely has its benefits.

This ingredient has shown to boost energy, muscle pumps and reduce recovery time when taken in a pre-workout supplement in one study. However, there hasn’t been enough research conducted on this ingredient to confirm anything.

The lack of studies on Arginine Inositol Silicate also means that it could cause unknown side effects. We recommend that you avoid this ingredient until sufficient study has been conducted to prove its safety and effectiveness.

This is a non-protein amino acid that’s shown to reduce fatigue, allowing you to train more frequently. However, it’s only proven to be effective when taken in doses of 2g-6g daily.

This is a problem, as there is only 750mg of L-Ornithine contained in Rhino Black – it’s been very underdosed, meaning it might not deliver any benefits.

Also known as Beetroot, this is a great ingredient to have in a pre-workout. It contains a high amount of nitrates, helping to boost your nitric oxide levels, resulting in increased blood flow and intense muscle pumps.

You should look out for this ingredient on your search for a quality pre-workout.

This is the second blend contained in Rhino Black, which is designed to give you an energy boost. Let’s look at the ingredients in this blend and see if they’re effective in delivering this benefit:

This ingredient has shown to promote muscular endurance and anaerobic running capacity. However, Beta-Alanine comes with the risk of Paresthesia.

Paresthesia is a tingling on the skin of your face, chest, hands, and extremities – although it’s not life threatening, it will definitely be uncomfortable to train with.

We recommend staying away from Beta-Alanine for this reason – MuscleSport International should’ve replaced this ingredient with Creatine Monohydrate, as it provides the same benefits but also boosts your strength as well.

This is a carbohydrate source that’s relatively unknown in sports nutrition. It’s believed to provide a sustained release of energy, to keep you fuelled in the gym – but there’s not enough studies to confirm this yet.

Also, there hasn’t been enough studies conducted on this ingredient to determine whether it comes with any risks of side effects. We recommend avoiding Highly Branched Cyclic Dextrin until studies have proven its safety and effectiveness.

This is a form of creatine that’s believed to have a great absorption rate. But this isn’t always a good thing.

Because it has a better absorption rate than other forms of creatine, you need less to experience side effects such as diarrhea, stomach pain and nausea. This is a problem, as there is a huge 2,000mg (2g) contained in Rhino Black, meaning you could be at risk of suffering from these side effects.

We recommend looking for a pre-workout that contains less of this ingredient, or to stay on the safe side, around 1,000mg (1g) of Creatine Monohydrate which is tried and tested to boost your muscular strength and endurance.

This is an amino acid that’s proven to reduce stress levels, as well as promote mental function (memory and reaction time). It’s a very useful ingredient to have in a supplement, but it’s not key in a pre-workout.

L-Tyrosine is better suited to a Nootropic supplement, but there isn’t really any disadvantages of including it in a pre-workout.

This is another blend inside the ‘Mental Stimulation and Focus Complex’, which consists of three forms of caffeine. Take a look:

However, there’s a problem with the dose in Rhino Black – the recommended daily allowance for Caffeine Anhydrous is set at 400mg, and this pre-workout contains exactly 400mg. This means you’re getting a days worth of Caffeine in one serving, which could cause you side effects like jitters, insomnia and energy crashes – not mentioning that you can’t enjoy your morning coffee either when taking Rhino Black.

You should definitely look for a pre-workout that contains caffeine on your search for a top quality pre-workout – the perfect amount per serving is 150-200mg, so you can still consume other products that contain Caffeine safely.

This means that you’re almost certain to experience side effects such as jitters, insomnia, and energy crashes when using Rhino Black.

This is a molecule that’s found in high amounts in eggs. Choline Bitartrate is most commonly used for its ability to enhance mental function (memory and reaction time).

However, the problem with Rhino Black is that it contains a large dose of this ingredient (300mg) – we recommend trying out servings of 50-100mg to start with, to avoid any unwanted side effects like headaches.

This is found in a variety of foods and is believed to possess fat burning properties. However, there hasn’t been enough research conducted on Hordenine to state it promotes fat burning.

This also means that there may be potential side effects from taking this ingredient that are unknown. We recommend that you avoid this ingredient until more research has been conducted to prove its safety and effectiveness. 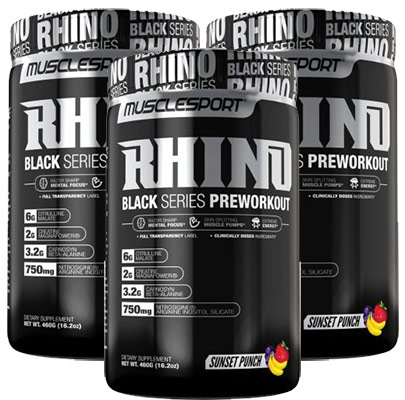 There are a few ingredients in Rhino Black that come with risks of side effects, such as Beta-Alanine, Creatine Magnesium Chelate and the high amount of Caffeine in this product.

Here’s a list of the potential side effects from taking Rhino Black:

This pre-workout contains some great ingredients that can make up a top quality product (L-Citrulline, Caffeine, and Beetroot). However, while they’ve dosed the L-Citrulline perfectly, they’ve slipped up with other ingredients like Caffeine – Rhino Black contains over 400mg of Caffeine, meaning you’re consuming a whole days worth of Caffeine in one serving, which is almost certain to give you side effects.

We recommend looking for a pre-workout that contains L-Citrulline, Caffeine, and Beetroot, as well as others like Creatine Monohydrate and L-Theanine.