Xtend Perform is a pre-workout supplement from SciVation. Unusually for a pre-workout, it’s missing caffeine on its ingredient list, but otherwise, it has a huge nutrient profile.

This is a very strange pre-workout product, as Scivation direct you to take a serving after your training session as well as before. We’ve analyzed Xtend Perform and laid out everything about it below. 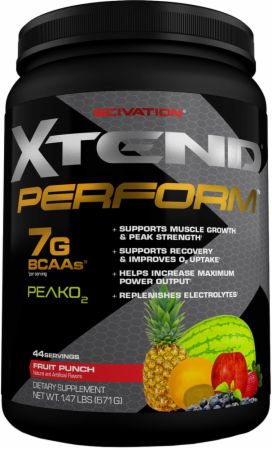 SciVation is a supplements company that prides itself on the quality of its products, ranging from whey protein to BCAA’s.

They try to make sure their manufacturing is premium and use unusual supplements to take their products to the next level – this is evident in the unusual ingredients in Xtend Perform.

SciVation has really tried to make this product an all-rounder by adding Vitamin D2 to try and boost your testosterone, but it doesn’t even deliver this (we’ll expand on this below in this section).

However, the L-Citrulline suggests that SciVation has tried to make this product mostly a pre-workout. 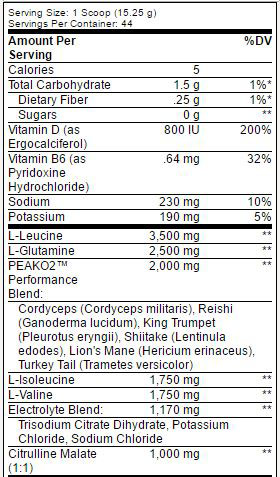 Also known as Ergocalciferol, this SciVation has started negatively by including this nutrient. Vitamin D2 has been shown to be less effective at raising testosterone levels, more toxic and less potent than Vitamin D3, so it seems like they’ve cut costs here – so much for their premium manufacturing.

SciVation have attempted to make Xtend Perform into an all-rounder, instead of limiting it to the pre-workout category, as it’s claimed this product will raise your testosterone. Unfortunately, even if Vitamin D3 was in its place, it would still be ineffective, as the optimal level of Vitamin D3 is 5,000IU daily (the optimum level for Vitamin D2 is even higher).

SciVation should have replaced Vitamin D2 with Vitamin D3 and increased the amount to 5,000IU to give you the full benefits, instead of cutting you short.

This is considered the ‘main’ BCAA (Branched Chain Amino Acids) as it’s where most of the benefits of supplementing with BCAA’s is from. It helps to preserve lean mass from breakdown while exercising, although it’s probably more beneficial taken while cutting calories.

There’s no denying that it’s a great nutrient, but don’t really need this in a pre-workout – an ingredient like Creatine being included would have benefitted you more, as it’s been proven to increase your strength and endurance in the gym.

We recommend looking out for Creatine during your search for a quality pre-workout.

Glutamine is a naturally occurring amino acids in dietary protein and can be found in meats and eggs. We can understand why SciVation has included this in here, as it’s believed that it enhances muscle building.

However, you don’t need this in a pre-workout product and it’s been proven to only benefit you if you’re deficient in Glutamine or during prolonged endurance exercise – so it would be better in a post-workout.

L-Isoleucine – This is another BCAA (Branched Chain Amino Acid), but it’s not as potent as L-Leucine at inducing muscle protein synthesis (encouraging muscle growth).

It’s believed that it increases the usage of glucose during exercise, but no studies have backed this benefit – this advantage would be better seen in a fat burner anyway, not a pre-workout.

L-Valine – This is the last of the three BCAA’s, but there is no significant benefit to adding this in a product, as Leucine and Isoleucine can replicate all of the advantages of L-Valine.

Citrulline Malate – Citrulline is by far the best ingredient in Xtend Perform, as it’s turned into L-Arginine in the kidneys after supplementation – this benefits you by increasing your nitric oxide levels, which leads to your blood vessels dilating, meaning you’ll experience great muscle pumps during your workout.

However, SciVation has fallen short by seriously underdosing Citrulline in Xtend Perform – the optimum amount of Citrulline is between 6,000-8,000mg to experience its benefits.

Now we’ll review the proprietary blend inside Xtend Perform – a proprietary blend is a mixture of ingredients that only shows the total amount of the whole blend, not each individual nutrient contained. This is a problem, as companies could use these blends to cut costs by creating most of the mixture with less beneficial ingredients and adding minimal amounts of the effective nutrients.

Take a look at what’s inside this blend:

However, nothing’s been proven to make this beneficial in a pre-workout – in fact, studies have shown that there have been no significant improvements to prolonged aerobic exercise when supplementing with cordyceps.

The worrying thing is that this ingredient could be taking up the bulk of this blend, meaning that you’re wasting time and money on a mostly ineffective product.

Also, there isn’t enough evidence to prove it’s safety to those pregnant or breastfeeding, which makes it very risky to those affected.

But nothing’s been proven to show that Reishi benefits your workout in the gym or any sporting performance. SciVation could have replaced this mushroom with Beetroot Extract, as it boosts your nitrate levels (nitrate is the precursor to nitric oxide), which in turn dilates your blood vessels, giving you a great muscle pump when lifting weights.

However, there haven’t been many studies conducted yet, and the few that have show that it hasn’t been effective in providing these benefits.

Again, this is concerning as it’s part of the proprietary blend, and most of the mixture could be made up of this ineffective mushroom.

However, it’s potentially unsafe when taken orally in medicinal amounts, and can cause stomach discomfort, blood abnormalities, skin swelling and breathing problems – this is a concern, as Shiitake is part of a proprietary blend, so you don’t know the exact quantity you are taking, meaning you’re putting yourself at risk to these potential side effects.

This proprietary blend doesn’t have any great ingredients inside. Although it contains electrolytes (Potassium and Sodium), this whole blend could have been replaced by 300mg of Coconut Water Powder to give you the same benefits but in a lower quantity.

It’s also been used to treat urinary tract infections, but there isn’t any benefit in having this inside a pre-workout apart from improving its flavour. SciVation has given this a fancy name and attempted to fool you into thinking it’s better than it is.

Worryingly, it’s part of the ‘Electrolyte’ proprietary blend – this could be taking up most of the space in this blend, meaning you’re wasting money on a flavouring.

The only positive we can see here is that Potassium is one of the 7 major electrolytes, so at least the total amount of water in your body will be regulated slightly.

Although it’s not very beneficial, Potassium Chloride comes with many potential side effects. It can cause an uneven heartbeat, tingling in your hands and feet, diarrhea and nausea. 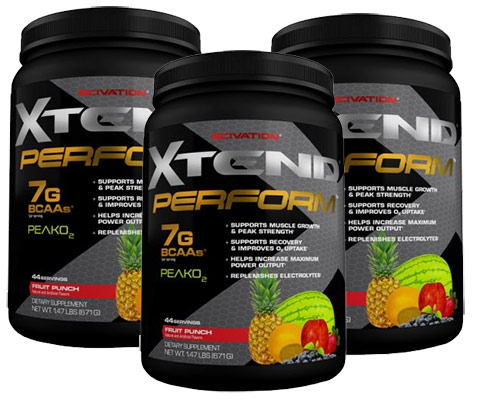 For a pre-workout, there isn’t a lot of ingredients that improves your performance in the gym. There are many ineffective nutrients taking up space, meaning your money would be wasted.

There are a few ingredients in Xtend Perform that could potentially cause side effects – Cordyceps hasn’t been proven to be safe to take by those pregnant or breastfeeding and Potassium Chloride can cause an uneven heartbeat, diarrhea, and nausea.

Shiitake can cause such side effects as  stomach discomfort, blood abnormalities, skin swelling and breathing problems when taken in large amounts (as it’s part of a proprietary blend, you’ll never know the exact quantity of this ingredient, so you’re putting yourself at risk).

Here is a list of the possible side effects when taking Xtend Perform:

SciVation haven’e succeeded in producing a pre-workout with Xtend Perform – they’ve tried to add many features, such as ingredients that are thought to increase testosterone and general well-being, but they don’t directly benefit your workout immediately.

The point of a pre-workout is to take it before your training session and feel the effects during your workout – you’re not likely to experience the benefits of the various mushrooms, and there isn’t even any ingredients that give you a boost, like (for example) caffeine would.

We strongly recommend you to save your money and stay away from this product and search for a quality pre-workout with more beneficial ingredients inside, like caffeine & L-Theanine (these two link up synergetically to form a ‘smart caffeine’, delivering the benefits of caffeine without the jitters or ‘crash’), creatine and beetroot extract.