This pre-workout claims to deliver:

According to the advertising blurb, Six Star Explosion increased the bench-press capacities of “31 weight-trained athletes” by 18.6% in 10 days. That’s quite a claim, so we can’t wait to get started…

Six Star Pro Nutrition is not a company, but a brand owned by Iovate Health Sciences International Inc, which is based in Mississauga, Canada.

The ownership of several brands has caused some confusion online, with some Pre-Workout Explosion reviews referring to the pre-workout as either a Six Star product or a MuscleTech product.

According to the Iovate website, the company started as a mail-order business in 1995 – and since then it has become a huge company whose brands have an international following.

Pre-Workout Explosion Review: The Ingredients and How They Work

Looking at the Pre-Workout Explosion label, we see some a few great ingredients, as well as a number of others that fall short of what you have a right to expect from such a popular product.

Reminder: Proprietary blends are sub-formulas that list ingredients, but not doses. This allows companies to charge for underdosed ingredients – we hate this practice because as a consumer, you have the right to know exactly what you’re paying for. 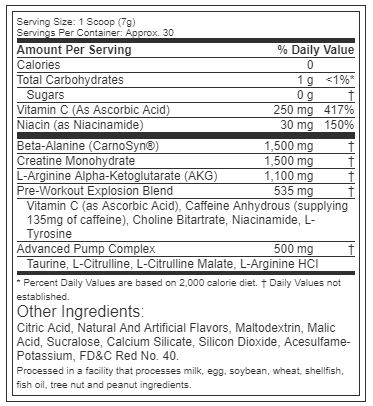 Beta-Alanine is a non-essential amino acid that can enhance muscular endurance. When ingested, the body converts Beta-Alanine into Carnosine, which reduces acid buildup in the body.

Despite this, Beta-Alanine is still on our list of ingredients to avoid. Why? Because it causes a paresthesia, a condition characterized by itching/tingling sensations that many lifters find unpleasant.

In fact, many past users describe paresthesia as the feeling of “insects crawling” across their body. Not a great start.

Now, this is more like it! Creatine Monohydrate is perhaps the best-tested and effective ingredient in the world of sports nutrition.

The molecule plays an important role in every part of your body – without it, you couldn’t move or function.

Creatine Monohydrate is our favorite form of the nutrient – so it’s great to see it in this supp. We’ve found that 1-1.5g of Creatine is optimal – and as Six Star Pre-Workout Explosion contains 1.5g, that’s two thumbs up from us.

L-Arginine is an amino acid that’s often promoted for its ability to produce nitric oxide. The idea here is that nitric oxide improves blood flow, which enhances muscle pumps.

However, a number of studies have failed to prove L-Arginine supplementation improves muscle pumps. In fact, its precursor, L-Citrulline, has been shown to be more effective for this purpose.

L-Arginine Alpha-Ketoglutarate (AKG) is different from plain old L-Arginine in that it contains the amino alongside a salt derived from glutaric acid. But despite the hype surrounding it, L-Arginine AKG does not improve muscular performance.

As you no doubt already know, Caffeine is a popular stimulant famous for its focus- and energy-boosting effects. It works by inhibiting the adenosine receptors to make you feel more alert.

In the gym, Caffeine is also proven to help you raise power output, running capacity. reaction time and training volume.

During our time testing pre-workouts, we’ve found 150mg-200mg of Caffeine to be ideal. Mixing this amount with L-Theanine increases the positive effects of Caffeine, while also preventing the ‘jacked up’ feelings which could ruin your workout. Sadly, this supplement doesn’t contain any L-Theanine.

Pre-Workout Explosion contains just 135mg of Caffeine, which falls short of the amount you need for best results.

Along with Beta-Alanine, Choline is another pre-workout ingredient to avoid. This is because it can make your breath and body odor smell like rotting fish.

But does it have any use as a pre-workout ingredient?

Not really. Choline has a rep as a brain booster, but one study suggests the molecule does not improve cognition, focus, or reaction time. Further in-depth research also shows Choline has no effect on training volume either.

It really is disappointing to see respected brands peddling disproven ingredients like this.

Taurine is often used as an anti-cramping agent to prevent stomach aches caused by high doses of Caffeine.

But since Pre-Workout Explosion contains just 135mg of Caffeine, Taurine is unnecessary for this purpose. Numerous studies also show Taurine has no effect on muscle damage or soreness, and only improves exercise capacity in people with heart conditions.

As a result, its inclusion is pointless.

L-Citrulline is an amino acid derived from watermelons. As a precursor to L-Arginine, L-Citrulline helps increase nitric oxide and widen the blood vessels for awesome muscle pumps.

Citrulline Malate is L-Citrulline with added malic acid, so we’re baffled to see Pre-Workout Explosion’s “Advanced Pump Complex” use both.

What’s strange about this formula is that it contains two forms of Arginine (L-Arginine AKG, L-Arginine HCI), as well as two forms of Citrulline. Studies show that out of the four versions, Citrulline Malate is by far the most effective at increasing muscle performance in the gym.

With this in mind, it would make much more sense if the makers swapped out Arginine and L-Citrulline for one larger, healthy dose of Citrulline Malate. 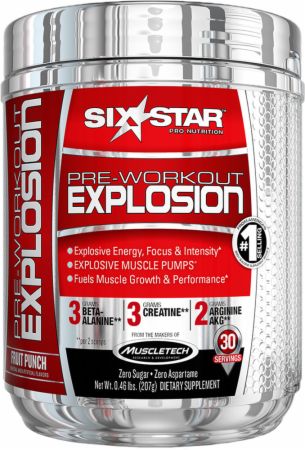 The ingredients in Six Star Pre-Workout Explosion are safe to use. However, this supplement may cause the following unpleasant side effects:

As we were preparing to do this Pre-Workout Explosion review, we weren’t expecting much.

But for $15, Six Star Pre-Workout Explosion isn’t a bad pre-workout.

It contains a few great ingredients – we’d never even consider taking a pre-workout that didn’t have at least some Creatine, Caffeine, or Citrulline Malate.

However, this product hides at least a couple of the better ingredients in proprietary blends – giving you no way of knowing how effective they’re likely to be.

And we can’t work out why the makers chose to put two different forms of Arginine and Citrulline in this supp. It would’ve made much more sense to increase the dose of Citrulline Malate, which is by far the most effective ingredient out of the four.

Pre-Workout Explosion also contains Beta-Alanine and Choline – two ingredients we also advise avoiding due to their harmless, yet often unpleasant potential side effects.

This pre-workout may hold some great ingredients which belie its low price. But the proprietary blends, use of pointless ingredients and possible low doses mean we can’t recommend Six Star Pre-Workout Explosion.

Instead, we recommend you spend a little more money on a pre-workout with a clear list of ingredients at optimal doses.