Since pretty much every supplement company claims to be the best and make the best products, this doesn’t mean much.

Still, we read one online Kraken pre-workout review that declares “this stuff is awesome”, so it sounds like this one may be worth trying…

Sparta Nutrition launched in February 2016 with the release of its Kraken pre-workout supplement and the Hydra Shred fat burner. The company now also makes and sells protein powders, BCAA, ketogenic products, and even clothing.

The company says its mission is to “redefine the norm” with “efficaciously dosed products that help you achieve your goals.”

A press release from August 2017 claims the company saw 6500% revenue and sales growth in its first year. It goes on to say it now sells to customers in 30 countries.

Note: Proprietary blends are sub-formulas that list each ingredient, but not the dosages.

That said, we’re sad to see more than a couple of ingredients that could cause unpleasant side effects, even if this supp does also hold one or two high-quality pre-workout staples.

But as much as we love L-Citrulline, we prefer it in a blend with Malic Acid (which creates Citrulline Malate). This is because Malic Acid reduces the buildup of ammonia to eradicate muscle soreness even more efficiently.

Beta-Alanine is an amino acid that can enhance physical performance, increase endurance, and promote muscle gains. However, we never recommend this ingredient. Here’s why…

Beta-Alanine can cause tingling/itching (a condition known as paresthesia).

Many bodybuilders and athletes find these feelings less than pleasant – we’ve even heard a few gym buddies describe “Beta-Alanine itch” as akin to “bees crawling” across the body.

Until we had to research it for this Kraken pre-workout review, we’d never heard of HydroMax – a Google search brought up a bunch of sites selling penis pumps. But we’re pretty sure you won’t find a “penis developer” in this pre-workout (hopefully not, anyway).

After digging a little further, we realize HydroMax is just Glycerol in powder form.

One 2012 study suggests Glycerol has “an increasing effect on aerobic […] performance” through hydration. However, we’d have to see corroborating evidence before we could recommend taking Glycerol in a pre-workout.

Contrary to popular belief, Taurine is not a stimulant. This mistaken notion comes from Taurine’s presence in Red Bull. Manufacturers often use Taurine to stop your muscles getting too sore.

However, the available research dismisses the notion that Taurine can reduce muscle damage or soreness.

Taurine is also said to boost exercise capacity. Yet the one study on the subject shows Taurine only improves walking distance in people with heart conditions.

So while Taurine is pretty harmless, it doesn’t have much use in this pre-workout.

Agmatine is a metabolite of L-Arginine, an amino acid that helps the body produce nitric oxide.

While nitric oxide production enhances muscle pumps and reduces fatigue, there’s not enough evidence of the role Agmatine supplementation plays in the process.

Until we see the results of more research, we recommend looking for robust alternatives like Citrulline Malate.

Instead of using Agmatine, it would’ve made more sense to add Malic Acid to the L-Citrulline in this supp for best results. We see small mistakes like this all too often – and it’s always disappointing to see.

N-Acetyl-Tyrosine (NALT) is widely known as a brain booster. And Sparta Nutrition probably includes it in the Kraken pre-workout to improve focus.

But while studies show a mix of NALT and 5-HTP can improve attention spans of children with ADHD, there just isn’t any evidence to suggest it does the same for adults or otherwise healthy children, either in isolation or otherwise.

Eria Jarensis is supposed to be a ‘safer’ and legal alternative to banned substances like AMP-Citrate, DMAA and Ephedrine.

And like these unsafe ingredients, Eria Jarensis is a stimulant that’s supposed to enhance focus, boost motivation and increase energy. The subjective difference between this and Caffeine is that Eria Jarensis is said to give you a more “euphoric feeling”.

The problem with Eria Jarensis is that it’s relatively new to the supplement world – and is therefore undertested.

So not only is the link between this ingredient and banned stimulants a real cause for concern; the fact there are no scientific studies to determine its effectiveness or safety makes Eria Jarensis one to avoid.

Caffeine is hugely popular. Experts claim 90% of Americans consume it in one form or another. But the stimulant does much more than help you wake up in the morning.

And at the right, Caffeine is also safe – making it the perfect stimulant in any pre-workout.

How does Caffeine work?

Caffeine molecules bind to the brain’s adenosine receptors to stop you getting tired. This allows more adrenaline and dopamine to flow through your system to make you feel more alert.

How much Caffeine do I need?

You probably already know too much Caffeine can make you anxious and highly strung. But as long as you get the dose right, you should be fine…

150-200mg is the perfect amount to get all Caffeine’s benefits without the negative side effects. We’re therefore pleased to see 200mg in the Kraken pre-workout.

This ingredient is seriously undertested. And considering it has a similar molecular structure to Ephedrine and DMAA (both of which are banned), this is a major cause for concern.

Labeled ‘POSSIBLY UNSAFE’ by WebMD, DMHA is another ingredient in Kraken we advise you to stay well away from.

L-Norvaline is an amino and a modified form Valine, a branched-chain amino acid (BCAA).

When found in pre-workouts alongside L-Citrulline, its job is to ‘up-regulate’ the nitric oxide synthase for greater power output and even more satisfying muscle pumps.

But while L-Norvaline is becoming very fashionable, there’s not enough evidence to show for sure it works. As we always say, you’re better off sticking with more robust ingredients that have the research behind them.

So until L-Norvaline becomes the subject of in-depth research, its use will remain nothing more than a gimmick. 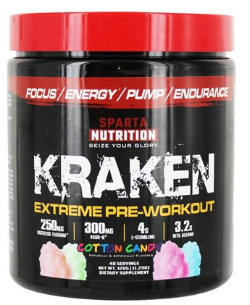 Paresthesia (itching and tingling) is a common side effect of taking Beta-Alanine. This is harmless, but many gym goers complain they find these sensations unpleasant.

Meanwhile, Eria Jarensis and DMHA are legal stimulants, but they also lack research. This is a major worry due to their similarities to banned (and dangerous) ingredients like Ephedrine, DMAA and AMP-Citrate.

There are concerns that DMHA (in particular) may cause high blood pressure, heart arrhythmia and other more severe side effects.

Kraken is yet another disappointment.

This pre-workout contains a couple of great ingredients. As we keep saying, Citrulline is great for endurance and muscle pumps. Meanwhile, Caffeine is perhaps the best-tested stimulant on the planet. But these are the only good things we can say about it.

These ingredients are billed as ‘safe’ alternatives to banned substances.

Run for the hills (and find a better pre-workout)

But the worrying similarities to Ephedrine et al and the lack of testing is enough to make us want to run for the hills. And preferably, we’ll do that after taking an all-natural pre-workout containing ONLY powerful, yet safe ingredients…