According to the Strength Cartel website, the Dead Game pre-workout “ain’t that watered down sh*t.” Well, that’s a relief.

So while the sweary promises and hell-for-leather branding are certainly different, we want to see whether Dead Game is ready to put its money where its mouth is. Here’s our Strength Cartel pre-workout review…

Strength Cartel was established in 2015 and is based in Orange County, California.

This page also states that “the strongest lifters in the game rock Strength Cartel.”

And a little digging tells us there’s truth in this statement – company CEO is Big Boy, a beast of a bodybuilder who holds the American deadlift record without a belt (843lb – set in 2015).

If you’ve read the articles on Supplement Tester before, you’ll know we always look closely at the ingredients when we start our reviews.

And what do we see as soon as we glance at the ingredients in this supp? Two proprietary blends sticking out like a couple of turds in a punch bowl.

We – and most fitness experts – hate proprietary blends because they list ingredients without the dosages. This gives you no way to figure out how safe or effective a product is before handing over your cash. 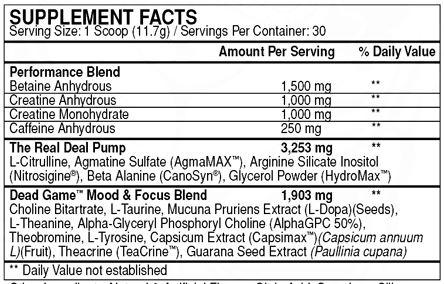 Also known as Trimethylglycine, Betaine is a molecule that the body produces naturally. It’s also found in foods like beetroot, cereals, seafood, spinach, and wine.

Some research suggests Betaine can boost strength and help improve body composition in trained men. In addition, one study found a reduced rate of change in fatigue, although two further studies failed to corroborate this.

And even worse – Betaine can cause fishy odors in breath and body secretions. So even if did help you make all kindsa gains (which it doesn’t), would that really be worth no-one wanting to go near you ’cause you stink? No, we don’t think so either.

Along with Caffeine and L-Citrulline Malate, Creatine is one of three more or less essential pre-workout ingredients.

For this reason, we’re always leery of touching a pre-workout without Creatine – so it’s great to find in this Strength Cartel pre-workout.

Your body produces Creatine naturally, and it plays a vital in everything you do. Without it, you couldn’t move, let alone lift or run. Creatine makes you stronger and enhances running capacity; it even protects you against fatigue and muscle damage.

When you work out, your body uses it Creatine stores at a faster rate than normal, which is why it’s wise to get more of it in a supp.

Caffeine is probably the most popular stimulant in the world. It’s estimated that over 90% of Americans ingest Caffeine in one form or another – and that’s because it’s safe AND it works.

It’s fair to say Caffeine is a perfect pre-workout ingredient. It not only boosts energy, but also improves focus, makes you stronger and gives you more motivation in the weight room.

Over the years, we’ve found 150-200mg of Caffeine to be the optimal amount to prepare you for an awesome workout. This Strength Cartel pre-workout contains 250mg, which is a little too much to take in one hit.

However, we prefer Citrulline Malate to plain old L-Citrulline. This adds Malic Acid to the amino acid to help reduce ammonia buildup and reduce muscle soreness.

Agamatine is a metabolite of L-Arginine, an amino acid which determines how much nitric oxide the body produces.

In fact, most of the available research focuses on Agmatine’s role in reducing pain and the symptoms of depression.

Beta-Alanine is a non-essential amino acid. It can induce modest improvements in performance during strength training and high-intensity exercise.

But we have mixed feelings about Beta-Alanine. This is because it can cause paresthesia – this is the name for the flushing, itching and tingling sensations that can ruin your exercise regime.

Glycerol is another ingredient we’ve seen a hell of a lot lately. It’s a clear, viscous liquid that can improve aerobic capacity through hyperhydration.

But to get the best results from Glycerol, users must take it at specific times prior to exercise and the amount taken must vary according to the weight of the individual. In fact, taking the wrong amount at the wrong time can actually lead to dehydration.

And because Strength Cartel Dead Game contains a set, unknown amount of Glycerol, there’s no way of knowing how well it’ll work for you.

Found largely in egg yolk, Choline is a molecule said to have focus-boosting properties.

However, the evidence for this is purely anecdotal; there are no published studies confirming Choline’s ability to boost focus or reaction times.

In addition, Choline can cause Trimethylaminuria (or fish odor syndrome (FOS)). So not only is it a useless pre-workout ingredient; it may also make your breath and body odor smell like putrefying fish.

The risk of FOS is also higher due to the presence of Betaine, which can also cause the same disgusting smells.

Also known as Velvet Bean and Cowitch, Mucuna Pruriens is a good source of L-DOPA, a dopamine precursor.

With this in mind, it comes as no surprise Mucuna Pruriens has been proven to improve subjective well-being.

However, there are other ingredients which have many uses in a pre-workout. In the case of Caffeine, these include being able to lift your mood AND enhance all-around performance in the gym.

In truth, Mucuna Pruriens is actually more suited to a testosterone booster.

One of the key ingredients in Green Tea, L-Theanine is an amino acid that helps you relax without feeling drowsy.

L-Theanine works brilliantly alongside Caffeine, as it enhances Caffeine’s stimulatory benefits, while also reducing the risk of jitters. 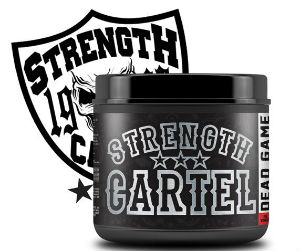 On the whole, Strength Cartel Dead Game is safe to use. However, you may experience the following side effects:

It contains a number of awesome ingredients – you’ll see the likes of Caffeine, Creatine, L-Citrulline time and time again in the best pre-workouts we’ve ever tested.

However, this pre-workout is let down by the hidden dosage info, which gives you no way of knowing whether this supp contains enough L-Citrulline to give you the best results.

But as it stands, we can’t recommend Dead Game.

Instead, we advise looking for a pre-workout that uses a transparent formula, contains ONLY great ingredients, and avoids those which can cause side effects.