This is another addition to Muscletech’s Vapor series of pre-workouts. We’ve analyzed Vapor X5 Ripped to help you make your own decision about it. 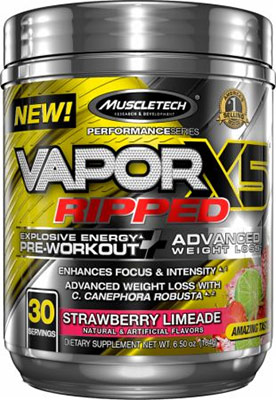 MuscleTech is a brand that was launched by Iovate Health Sciences Inc in 1998. They’ve released a range of successful products, from fat burners in their “Hydroxycut” series, to creatine supplements such as Cell-Tech.

One positive we can see from looking at the ingredients list is that all the ingredients are clearly listed in their quantities – meaning you know exactly what you’re getting.

However, there are some ingredients such as Beta-Alanine and Yohimbe Extract, which can cause side effects. We’ll go through which ingredients are effective, and which ones aren’t in this section.

This is one of the best ingredients in Vapor X5 Ripped. L-Citrulline turns into nitric oxide in your kidneys and boosts your nitric oxide levels. This leads to a dilation of blood vessels (vasodilation) which results in intense muscle pumps during your workout.

Muscle Pumps are one of the key benefits of a quality pre-workout, and L-Citrulline is definitely the best ingredient to help you achieve them.

However, there’s a problem with the dosing in Vapor X5 Ripped. L-Citrulline’s optimal dose is between 6,000-8,000mg. There’s only 1,500mg (1.5g) of this ingredient in this pre-workout – meaning you won’t experience the full benefits of L-Citrulline as it’s been severely under-dosed.

We recommend looking for a pre-workout that contains 6,000mg-8,000mg of L-Citrulline – to experience intense muscle pumps while you lift weights.

Although Hawthorn Extract’s benefits haven’t been proven, it’s shown to cause potential side effects like dizziness, headaches, and nausea.

MuscleTech should’ve replaced this ingredient with something more beneficial, such as Creatine Monohydrate which is proven to boost strength and endurance in the gym.

MuscleTech should have left this ingredient out of Vapor X5 Ripped. Although Beta-Alanine can improve muscular endurance, it’s shown to cause paresthesia in doses over 0.8g-1g.

Paresthesia is a tingling on the skin of your face, chest, hands, and extremities – it’s not life threatening, but it’s uncomfortable enough to ruin your workout.

As Vapor X5 Ripped contains 1.2g of Beta-Alanine, you’re likely to experience its side effect. We recommend staying away from this pre-workout to avoid paresthesia – so you can focus on your workout without any distractions.

This is an organic acid that contains a sulfur, which is found in meats and other foods.

Taurine is most commonly used for its ability to reduce cramping. Although it’s not key in a pre-workout, there’s no negatives to having this in a supplement.

Also known simply as L-Carnitine and ALCAR, this is a compound that’s known for its cognitive boosting properties.

But it also plays a great role in a pre-workout – L-Carnitine’s shown to reduce fatigue and enhance muscular endurance in doses of 500mg-2,000mg.

You should look out for this ingredient on your search for a quality pre-workout to experience its benefits.

This is simply a fancy name for what’s also known as Green Coffee Bean Extract (which is what it’s named as on other ingredient lists).

It’s most commonly used in fat burners due to containing Chlorogenic Acid, which is proven boost weight loss significantly. However, it’s not vital to a pre-workout supplement – there are already top quality fat burners on the market, so MuscleTech kept Vapor X5 Ripped purely as a pre-workout product.

MuscleTech should’ve replaced this ingredient with something like Beetroot Extract – it’s shown to promote nitric oxide production and deliver intense muscle pumps in the gym.

This herb is most commonly used in cooking to add flavor. But it also contains Rosmarinic Acid, which is an anti-oxidant and health compound.

However, although it has anti-inflammatory effects and reduce symptoms of allergies, Rosemary delivers no benefits that would aid your training session.

This is one of the best ingredients in a pre-workout. It’s a powerful stimulant that’s used around the world on a daily basis, in products like tea or coffee.

Caffeine comes with a range of benefits, such as boosting your strength, endurance, and mental function (memory and reaction time). The only potential issue can be the dosing in some products, but MuscleTech has dosed Caffeine perfectly in Vapor X5 Ripped.

We recommend consuming caffeine in serving sizes of 150mg-200mg to experience its full benefits without any side effects like jitters, energy crashes, and insomnia.

This is the most worrying ingredient in Vapor X5 Ripped.

If you’re reading this in the UK and Canada, you won’t be able to get hold of Yohimbe’s as it’s been banned – this is because it caused side effects like headaches, nervousness, nausea, diarrhea, increased blood pressure, anxiety, and heart palpitations.

We strongly recommend you to stay away from Yohimbe, and products containing it, to avoid its side effects.

Choline is most commonly used for its ability to enhance mental function and promote liver heath (it reduces fatty liver buildup). It’s also shown to increase endurance – which is why MuscleTech has included this ingredient in Vapor X5 Ripped.

However, there’s a problem with the dosing – Choline’s only been proven to deliver its benefits at a dose of 250mg-500mg – there’s only 100mg in Vapor X5 Ripped, meaning you’re not likely to experience its full benefits.

This is one of the best ingredients you can find in a pre-workout when combined with caffeine – L-Theanine forms a ‘smart caffeine’ when consumed with caffeine, providing you with enhanced benefits of caffiene without any side effects like jitters or energy crashes.

However, MuscleTech has made a mistake by under-dosing L-Theanine in Vapor X5 Ripped. It’s optimal dose is between 100-200mg, meaning there’s not enough L-Theanine in this pre-workout to benefit you.

We recommend looking for a pre-workout that contains L-Theanine in a dose of 100-200mg, alongside caffeine. 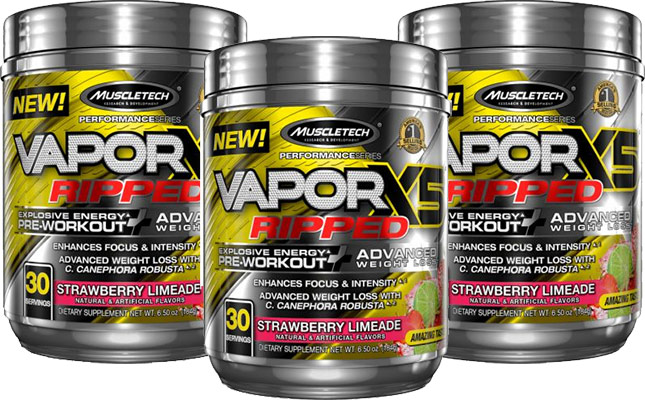 MuscleTech has under-dosed the some of the most effective ingredients in Vapor X5 Ripped – L-Citrulline and L-Theanine. This also contains Yohimbe, which is banned in the UK and Canada.

Vapor X5 Ripped contains a few ingredients that can cause side effects, such as Hawthorn Extract, Beta-Alanine, and Yohimbe Extract.

It’s concerning that MuscleTech included Yohimbe Extract, as it’s been banned in the UK and Canada for causing side effects like headaches, nervousness, nausea, diarrhea, increased blood pressure, anxiety, and heart palpitations.

Here’s a list of the potential side effects from taking Vapor X5 Ripped:

We strongly recommend looking for a pre-workout supplement without Hawthorn Extract, Beta-Alanine, and especially Yohimbe Extract inside.

There are two positives with Vapor X5 Ripped – all of the ingredients and their quantities are clearly listed, so you know exactly what you’re getting. Also, it contains L-Citrulline, L-Theanine, L-Carnitine, and Caffeine, which are great ingredients to have in a quality pre-workout.

However, some of these ingredients have been under-dosed in Vapor X5 Ripped, meaning they may be ineffective in this product.

Also, it contains some potentially dangerous ingredients like Hawthorn Extract, Beta-Alanine, and especially Yohimbe Extract (Yohimbe’s banned in the UK and Canada for causing harmful side effects).

We recommend that you look for a pre-workout without any harmful ingredients, and with L-Citrulline, L-Theanine, L-Carnitine, and Caffeine dosed in their optimal amounts.

You should also look out for other great ingredients for a pre-workout. like Beetroot Extract (which promotes intense muscle pumps), and Creatine Monohydrate (which is proven to boost strength and endurance).