The Venom Power pre-workout is marketed by Micquel Wright, a bodybuilder with a strong social-media following.

We can’t find many other Venom Power pre-workout reviews, despite it being quite a popular product. So we thought we’d better run it through its paces…

Micquel Wright is a UK bodybuilder and the owner of Micquel Wright Ltd, which was incorporated in September 2017. As it stands, the company’s only supplements are the Venom Power pre-workout and the Gas Mark 10 fat burner.

The 2 x PCA British Champion is currently the sole director of this company, although he says he sees his “life as a business” and that he wants his business to “get bigger and stronger as time goes by.”

Venom Power Pre-Workout Ingredients and How They Work

The first thing we notice about the Venom Power pre-workout is that the whole product is two proprietary blends (“Venom Power Pump” and “Venom Power Energy”).

Reminder: Proprietary blends are sub-formulas which list ingredients, but not dosages. We hate this practice because it gives you no way to tell how safe or effective a supplement is.

And in Beta-Alanine and DMHA, we also see two ingredients that can cause unpleasant side effects.

Citrulline Malate is an awesome blend of L-Citrulline (a dietary amino acid) and Malic Acid (an organic compound).

As a precursor to L-Arginine, L-Citrulline helps your body produce nitric oxide, which widens your blood vessels for more satisfying muscle pumps and greater endurance.

The perfect dose of Citrulline Malate is 6g (6000mg). But as the Venom Power pre-workout hides the dose info, there’s no way of telling whether it’ll do the job you’re paying for.

Beta-Alanine can improve muscular endurance and reduce fatigue; it may even have a mildly-positive effect on running capacity.

Despite these benefits, we usually recommend staying away from Beta-Alanine. Why? Because it can cause paresthesia, a condition known for causing unpleasant itching, flushing, and tingling sensations.

Many users experience these sensations on their face, neck, or the backs of their hands.

L-Norvaline is an unbranched-chain amino acid that derives from Valine.

Norvaline is marketed for its supposed ability to regulate the flow of nitric oxide in the blood, which (in theory) works with Citrulline Malate to enhance vasodilation for bigger, longer-lasting pumps.

But while L-Norvaline is becoming popular (we’re seeing it in more and more pre-workouts), it’s relatively new to the world of nutrition – and therefore understudied.

So until the results of further research get published in reputable medical journals, we can’t recommend L-Norvaline.

Glycerol is a clear, viscous compound often used as a solvent and food sweetener.

It was thought to be a masking agent and was therefore banned for use in competitive sports until 2018. The ingredient is no longer prohibited, and research suggests Glycerol supplementation can boost exercise performance through hyper-hydration.

However, the guidelines for using Glycerol are very specific. For example, a 2010 article by van Rosendal SP et al says endurance athletes must “ingest Glycerol 1.2 g/kg BW in 26 mL/kg BW of fluid over a period of 60 minutes, 30 minutes prior to exercise.”

You also need to make sure you drink plenty of water with Glycerol as it could actually cause dehydration.

Along with L-Citrulline, Caffeine is one of the two best ingredients in Micquel Wright’s Venom Power pre-workout.

All of this makes Caffeine a key ingredient in the best pre-workouts on the market.

How does Caffeine work – and what’s the ideal dose?

For laser-sharp focus, try to take between 150mg and 200mg of Caffeine. In one serving, this is enough to give you all of Caffeine’s benefits, but without those jittery feelings or energy crashes.

Even better – look for a pre-workout that contains ‘Smart Caffeine’. This blends Caffeine with L-Theanine to enhance the awesome effects of the stimulant, but it also reduces the chances of getting jittery and anxious.

Also known as Octodrine and 2-Aminoisoheptane, DMHA started popping up in a lot of supplements – esp. pre-workouts – in early 2017.

DMHA is widely seen as a direct ‘safe’ replacement for DMAA, which was banned in 2012. And like DMAA, DMHA is said to boost energy, enhance focus and even reduce hunger cravings.

The two main issues we have with DMHA

One, DHMA has a similar mechanism to DMAA.

This means it could possibly cause similar dangerous side effects, including irregular heartbeat and high blood pressure. In fact, the WebMD website describes Octodrine as “POSSIBLY UNSAFE when taken by mouth.”

And two, DMHA is a relatively new stimulant and isn’t backed by enough research to justify its use. As if having a similar mode of action to a dangerous drug isn’t enough, the fact is no-one knows whether DMHA is a) safe or b) effective – which is worrying.

As a result, DMHA is a pre-workout ingredient to avoid.

Venom Power contains Sucralose – an artificial sweetener that is 600 times sweeter than sugar.

Sucralose starts life as sugar, but after men and women in white coats add chlorine to the sugar, it becomes Sucralose – a substance which is free of calories and cannot be absorbed by the body.

It has been linked with a number of side effects, including migraines, dizziness, and blurred vision. We prefer pre-workouts with all-natural ingredients as they’re more likely to be safer and free from side effects. 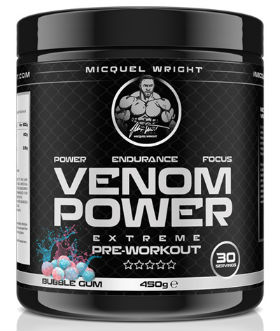 For example, while Caffeine is well-tested and safe, more than 200mg in one hit can make you feel anxious and cause energy crashes. But as this product hides it dosage info, there’s no way to tell whether this will be the case.

You may also experience the following side effects from using Venom Power pre-workout:

Going into this Venom Power pre-workout review, we had big hopes for the product. After all, Micquel Wright clearly knows his way around the gym.

So it’s sad to see the same problems that STILL plague too many supplements also apply to Venom Power.

But first, the good stuff. We’re always we pleased to see awesome ingredients like Citrulline Malate and Caffeine – so we have to give Micquel Wright plaudits for this.

The use of proprietary blends is a nasty marketing trick. It allows brands to hide dose info and say their products contain key ingredients, when in fact they contain minimal amounts.

We’re not saying Micquel Wright does this with Venom Power – but if the brand doesn’t, why does it need to use proprietary blends?

This pre-workout also uses Beta-Alanine, which can cause itching and flushing sensations which can call a premature halt to your exercise. But perhaps worst of all, you’ll also find DMHA – an ingredient with a similar mechanism to DMAA, an unsafe and now banned substance.

For all these reasons, we recommend that you skip Micquel Wright’s Venom Power pre-workout and look for one with ingredients you know are powerful, yet safe and natural.