This product has been around for quite some time, so many of our readers may be surprised to discover we’ve never done a Yeah Buddy pre-workout review until now.

Yeah Buddy is a pre-workout from Ronnie Coleman – the eight-time winner of the Mr Olympia title.

With such a big, and well-respected name behind it, it’s no surprise this supp has generated interest online. It must be good, right?

Most of that looks pretty good, except we don’t like anything “extreme.”

We’d rather have great ingredients and optimal doses to ensure you get a great workout. Still, the product intrigues us enough to start this Yeah Buddy Ronnie Coleman review…

Ronnie Coleman is a company owned by – you guessed it – Ronnie Coleman and his business partner. The company uses the tagline “supplements you can trust.”

On the company website’s About page, Coleman says all his “ingredients have a purpose, are of highest quality and are totally legal.”

He also claims his supplements use “only the most effective, proven and safe ingredients on the market.” But looking at Ronnie Coleman’s Yeah Buddy formula, these claims don’t seem to ring true…

Yeah Buddy Pre-Workout Ingredients and How They Work

The first thing we notice about Yeah Buddy is the use of at least three ingredients we wouldn’t touch with a ten-foot pole. It also a contains a proprietary blend, which ain’t great either.

Reminder: Proprietary blends are lists of sub-ingredients that hide vital dosage info. Most experts don’t like them because they give you no way to see exactly what – or how much – you’re paying for. 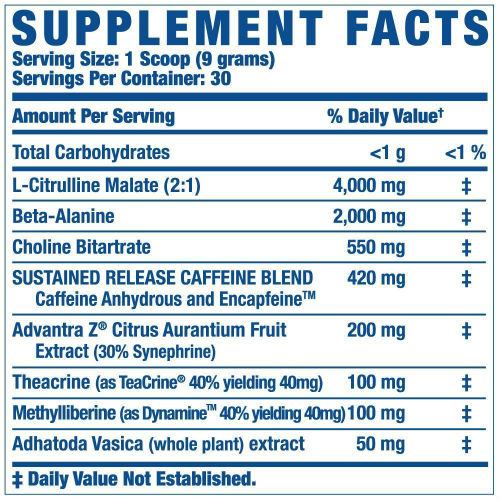 L-Citrulline Malate is a fantastic pre-workout ingredient. It’s a potent blend of L-Citrulline (a dietary amino) and Malic Acid (an organic compound) that we wouldn’t want to go without in any pre-workout.

Your body converts L-Citrulline to Arginine in the kidneys to help your body produce more nitric oxide and widen your blood vessels. This then sends oxygen and other vital nutrients to your muscles so they grow larger, faster.

Having tested hundreds of pre-workouts in our time, we’ve found 6000mg (6g) of Citrulline Malate gives you the best results.

But as Yeah Buddy contains only 4000mg of this dietary amino acid, it could make your muscle pumps and performance go pale.

Beta-Alanine is a modified amino acid that some studies suggest could reduce fatigue and make you feel slightly stronger during your workout.

Even so, Beta-Alanine is number one on our list of pre-workout ingredients that cause side effects. And for this reason, we’ll always advise you avoid it. 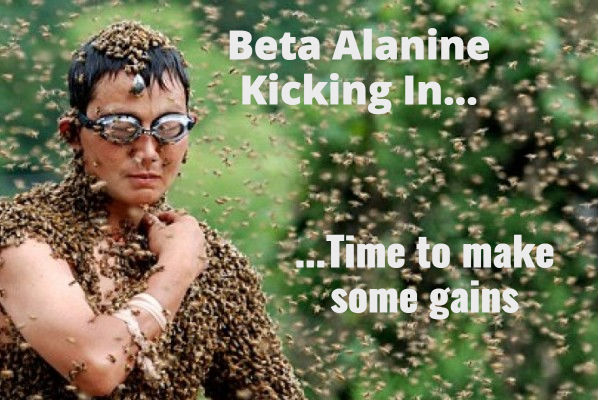 You may already know that itching, prickling, or burning sensations are common side effects of using pre-workout supplements. But you might not realize Beta-Alanine is usually to blame.

No-one knows for sure why Beta-Alanine causes these unpleasant feelings, although one theory is that it binds to your nerve receptors, which excites the nerves and makes different parts of your body prickle.

But however it works, you – like many other lifters – may find Beta-Alanine’s side effects far outweigh the benefits.

Found in large amounts in eggs, Choline is a molecule with a strong reputation as a brain booster. We suspect Ronnie Coleman and co. included Choline in this supp to help improve focus.

But since it has no impact on aerobic capacity, endurance, reaction time, or anything else you’d look for in a pre-workout, we don’t see the point of its inclusion here.

This is especially true when you consider there are several better ingredients that help you focus AND improve performance.

And it gets worse… 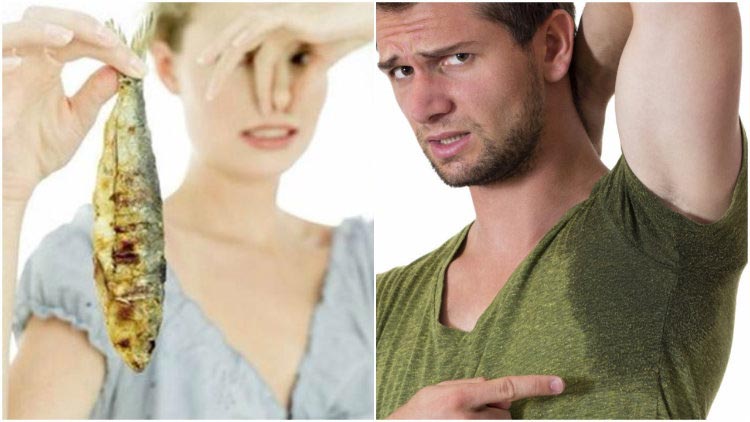 Choline is second on the list of Yeah Buddy’s ingredients we advise avoiding. This is because it can make your breath and body odor smell like rotten fish.

So while the benefits of Choline in a pre-workout are few, the downsides make it one we never want to try again.

Caffeine is perhaps the best-tested and effective stimulant on Planet Earth.

Millions of people drink it in coffee to help stay alert and focused. But it’s also great for the same purpose at the gym, so it’s no shock to see it in this pre-workout.

In fact, several studies show Caffeine reduces fatigue, boosts endurance and enhances your strength and power to get you ready for the weight room.

The main issue with the Caffeine in Yeah Buddy is that it’s part of a proprietary blend with Encapfeine (an ingredient designed to mask the taste of the stimulant).

For this reason, there’s no way to tell how much Caffeine Yeah Buddy contains. If there’s too much here, it may make you crash and could ruin your workout. But if there’s too little, this supp could rob you of the focus and power that the perfect dose of Caffeine provides. As many other reviewers report, there appears to A LOT of Caffeine in Yeah Buddy.

Otherwise known as Bitter Orange, Orange Peel and Synephrine, this ingredient is found in hundreds of shady fat burners on the market. This is due to studies which suggest it could reduce appetite and boost metabolism.

But as a pre-workout ingredient? We have no idea. Research shows Bitter Orange does NOT improve alertness or do much else, for that matter.

An NCBI study, shows Citrus Aurantium has strong links with a range of “adverse” heart conditions. These include cardiac arrest, ventricular fibrillation, tachycardia and myocardial infarction.

Despite not being on the FDA’s banned ingredient list, Synephrine has a similar structure to Ephedrine – which is proven to be dangerous and is rightly illegal in the US.

The National Institutes of Health Office of Dietary Supplements says that “[Citrus Aurantium] may not be safe to use as a dietary supplement.”

As both are stimulants, mixing Citrus Aurantium and Caffeine could raise your risk of high blood pressure, fast heartbeat, stroke and more.

As a result, we recommend you stay well away from ANY supplement that contains Citrus Aurantium.

Theacrine is very similar to Caffeine. In fact, it appears to be a lab-modified version of the better-known stimulant.

So why include it in a pre-workout that already contains Caffeine?

Well, early research in rats suggests the body doesn’t build up a tolerance for Theacrine in the way it sometimes can with Caffeine.

However, all the existing evidence of Theacrine’s potential to boost focus is subjective. Without objective proof of its efficacy for this purpose, there’s no way we can recommend taking it.

Also known by the brand name Dynamine, Methylliberine is an alkaloid found in a number of beverages that also contain Caffeine.

According to Dynamine’s distributors, Compound Solutions, the compound is “believed to behave” like Theacrine and “may amplify feelings of energy, mood and focus by activating dopamine receptors.”

This is worrying because not even the people selling it seem to know a) how Methylliberine works or b) whether it actually works at all.

Adhatoda Vasica grows on the Himalayan plains of India. The herb is believed to be remedy for asthma, colds, peptic ulcers and joint pain.

However, there’s no published research to back up these claims and its use in Yeah Buddy baffles us. 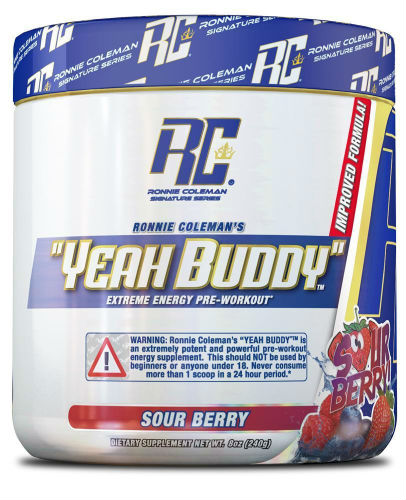 The product bottle carries a clear warning that “Ronnie Coleman’s ‘YEAH BUDDY’ is an extremely potent and pre-workout.” The label also advises that Yeah Buddy is not suitable for beginners or those under 18.

In addition, you should never consume “more than one scoop in a 24 hour period.” This is good advice…

Yeah Buddy contains a potentially unsafe ingredient in Citrus Aurantium. Also known as Bitter Orange, Orange Peel and Synephrine, this ingredient has been known to cause:

Research also suggests that mixing Caffeine with Citrus Aurantium increases the risk of the conditions listed above.

Beta-Alanine may cause itching/tingling/prickling sensations on or within your skin.

In addition, Choline supplementation can cause fishy breath and body odor.

When we started this Ronnie Coleman Yeah Buddy review, we had high hopes. After all, the eight-time Mr Olympia is a legend in bodybuilding circles.

But unfortunately, this product isn’t the best pre-workout – far from it.

The best thing about Yeah Buddy is that it contains L-Citrulline Malate – along with Creatine, this is one of our two favorite workout ingredients.

So what’s wrong with it?

Well, where do we start? Here goes…

While harmless, Beta-Alanine may cause itching or tingling sensations that many lifters find ruin their workouts. Meanwhile, Choline can make your breath and body odor smell fishy.

And Citrus Aurantium? Not only does it have no use as a pre-workout ingredient; medical research also links it with increased risk of heart conditions. Mixing Caffeine with Citrus Aurantium may increase these health risks.

Yeah Buddy contains Theacrine and Methylliberine, both of which are supposed to increase focus. However, there hasn’t been enough research on either of these stimulants to justify using them here.

Finally, Adhatoda Vasica is thought to be a remedy for asthma, peptic ulcers and joint pain. But we can’t see any reason to use this unstudied herb in a pre-workout.

Yeah Buddy contains too many ingredients on our must-avoid list, as well as those that are either untested or understudied. So, we advise that you ignore this supp and choose a pre-workout with safer and more effective ingredients.