The description for Vital Lab’s Anafuse calls it a “flawless fusion of recently discovered anabolics.”

Does this mean this test booster contains untested ingredients hidden behind the usual bluster? Or could Anafuse truly be “a quantum leap forward” as the ad copy claims?

Our guess is the former, but we’re still willing to give it a shot.

We don’t like hype – and most of the claims above both puzzle and irritate us. However, the positive Anafuse logs and online feedback make us curious. Check out our Anafuse review below…

We don’t know anything about Vital Labs, except that it changed its name to Vital Alchemy at some point in the past. Still, many of its products still carry the Vital Labs name.

Is this a sign these supplements have been stuck in a warehouse for a long time? Who knows.

The brand doesn’t appear to have its own website and we’re not going to waste our time digging for more info.

At this point, there seems no way for you to tell whether Vital Alchemy/Vital Labs is a real company, or just a cover for a couple of kids playing with their science kits in their mom’s attic.

The first thing we see on the Anafuse label is a big ol’ proprietary blend.

Note: Proprietary blends are lists of sub-ingredients that keep dosages hidden. They annoy us because they give you no way of knowing whether the doses are ineffective (usually too low) or unsafe (too high).

However, we’re glad to see this supp uses one or two natural T-boosting staples. 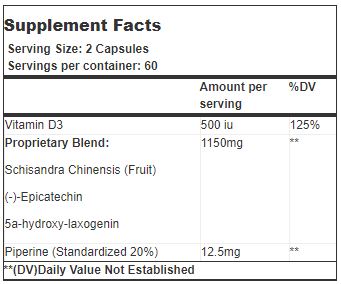 Your skin usually absorbs Vitamin D3 from exposure to sunlight. Nevertheless, experts estimate around 1 billion of the Earth’s population don’t get enough of this essential nutrient.

If you live in a country with an overcast climate, or you spend a lot of time indoors, you’re likely to be deficient in Vitamin D.

Research shows a dose of 3332 IU or more boosts testosterone and raises energy. Meanwhile, a study published in the Journal of Science and Medicine in Sport 4000+ IU boosts strength and muscle size.

But as Anafuse contains just 500 IU, it’s unlikely to give you any of these benefits.

Schisandra Chinensis is a woody vine native to Northern China. Its berries (known as Magnolia Berries) are thought to enhance performance. This claim is mainly based on decades-old research from Soviet Russia that we cannot access.

In western medicine, the evidence of its efficacy as a T-booster is thin on the ground. However, early western research suggests it can reduce cortisol. And as the stress hormone can reduce T, the use of the Schisandra Chinensis fruit might be beneficial.

Some initial research also suggests Schisandra may improve focus and thinking speed, but that not’s enough to warrant its use here.

Besides, there’s little proof this fruit has any direct effect on testosterone, strength, or muscle mass.

(-)-Epicatechin is a a compound found in dark chocolate. A 2014 NCBI study abstract suggests the molecule may influence muscle growth.

This is based on the idea that (-)-Epicatechin is a myostatin inhibitor.

As low levels of myostatin could raise muscle mass with none of the side effects you’d link with anabolic steroids, this molecule deserves further investigation.

But as it stands, there isn’t enough proof (-)-Epicatechin boosts T or muscle mass in humans. Despite this, you’ll find hundreds of supplements – like this one – already using this ingredient. In our opinion, that is premature, to say the least.

5a-Hydroxy-Laxogenin (or Laxogenin for short) is a steroidal sapinogen. According to limited animal studies, Laxogenin can increase protein synthesis in the muscles to produce anabolic effects.

But besides this promise, there is no evidence that Laxogenin has the same effects in humans.

Is Laxogenin a steroid?

Laxogenin has many of the same effects as anabolic steroids. At this time, it’s legal to take and undetectable in drug tests. However, this may soon change.

And due to the limited human research and close links with illegal steroids, we do not advise taking Laxogenin.

Piperine is also known as Black Pepper Extract and you’ll see it in many T-boosters. While it doesn’t boost T on its own, Black Pepper helps your body absorb more of the other ingredients in T-boosting formulas.

But as Anafuse contains unproven ingredients, Piperine may be wasted here. 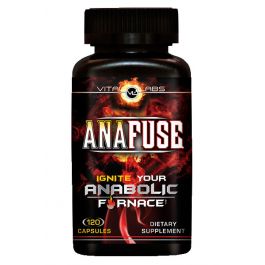 There are no noted side effects for most of Anafuse’s ingredients.

However, the likes of Laxogenin haven’t been studied to any great degree in humans. It’s therefore hard to say whether you’ll experience any unwanted symptoms.

The use of proprietary blends also gives you no way to gauge how safe these ingredients are, which in turn makes it hard to figure out what to stack with Anafuse.

Schisandra Chinensis is also possibly safe in most cases. However, doctors advise against taking it if you suffer from epilepsy, peptic ulcers, or high brain pressure. This is due to concerns that Schisandra could worsen the symptoms of these conditions.

Anafuse certainly is different to many T-boosters out there – but is this a good thing?

In truth, many of the ingredients here show promise as testosterone boosters. For example, some research suggests (-)-Epicatechin and Laxogenin boosts T in rats.

There’s still not enough evidence of the effects of these ingredients in humans to warrant their use in a supplement. This is especially true when you consider Laxogenin has similar effects to banned steroids.

Anafuse also contains at least one useless ingredient. Schisandra may reduce cortisol, which COULD indirectly affect testosterone. But otherwise, we can’t see why it’s used in this formula.

And while Vitamin D3 is an awesome T-booster, there’s nowhere near enough of it here to have an effect.

Who made this T-booster?

Before you buy any supplement, you want to know it’s safe AND does the job you’re paying for. Bear in mind Vital Labs doesn’t have its own website and there’s no way to tell who’s behind this product.

Would you let someone operate on you if you weren’t sure of their credentials. No? Neither would we.

With this in mind, we advise caution before setting this supplement loose on your body.

We don’t like proprietary blends at the best of times. By hiding vital dose info, they do you a disservice. You have a right to know what you’re paying for.

But as this supp uses potent ingredients that are untested in humans, the lack of dose info is a big worry. As a result, we also advise against adding other supps to your regimen as part of an Anafuse stack.

It’s never enough to put out a supplement that MIGHT work. For the good of your health and bank balance, look for a T-booster with ingredients proven to work in humans.

And never settle for less – you deserve better.