Androgenix is a testosterone booster made and sold by Supreme Sports Enhancements. It offers 120 capsules (60 servings) for $35.99.

This supplement claims to:

The description for this product claims the testosterone booster is “backed by science”, which is something every fitness brand says, even when their products turn out to be awful.

For this reason, the key to buying great supplements is to ignore the hype and get down to brass tacks.

And the only way to do that is to look at the ingredients. But first, who – or what – is Supreme Sports Enhancements?

Supreme Sports Enhancements is a supplement company based in Jersey City, New Jersey in the US. Founded in 2007, the company claims to be “guided by science and an unwavering commitment to quality.”

According to the SSE website, this ethos has led the company to “become one of the fastest growing sports nutrition companies in the world.”

But this is news to us – while we’d heard of the company before starting this review, it’s hardly one of the big players.

Still, the brand’s products are available from a number of well-known online and offline retailers.

Supplements are split into two different sub-brands: Performance Series and Pharma Series (of which Androgenix is part).

Looking at the ingredients list for Androgenix gave us quite a surprise – it’s unusual in that it contains just two ingredients: ‘Gingergenic’ and ‘AndroJax’. As this supplement costs $35.99 from Bodybuilding.com, you have a right to expect much more for your money.

With this in mind, the pair of ingredients in Androgenix must be special, right? Let’s find out… 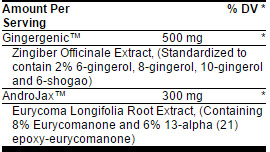 Gingergenic is a trademarked name for Ginger – a common spice that research suggests MIGHT boost testosterone.

Although research is limited, Ginger has been seen to increase luteinizing hormone (LH) – a key precursor to testosterone and muscle growth. One study by Al-Kadir Mares, W et al appeared to result in a 43.2% boost in LH for infertile male subjects.

However, this study is unreliable due to the lack of a placebo trial and the absence of dose info.

But while the spice does show some promise as a T-booster, this just isn’t enough evidence to warrant including here – especially one using just two ingredients.

Again, AndroJax is a trademarked name for Eurycoma Longifolia (Longjack), which is otherwise known as Tongkat Ali.

You’ll find Tongkat Ali in hundreds of testosterone boosters – which you could see as a sign that it works for this purpose.

But where’s the science?

In theory, the flowering plant should raise T. This is because it contains the bioactive compounds eurycomaoside and eurycolactone, which have been shown to improve aspects of sexual performance.

It’s thought these compounds work by increasing the activity of CYP17 compound in the testes. Despite this, evidence of Tongkat’s test-boosting power remains sparse.

One study suggests Longjack helps increase fertility, which may also help increase levels of the male hormone in infertile men. However, there’s zero evidence it does the same for otherwise healthy subjects.

On the whole, yes. However, some supplements containing Eurycoma Longfolia have been shown to contain traces of lead and/or mercury. If used in high amounts, this could prove toxic.

Androgenix contains two ingredients that are safe to use.

However, some supplements using Eurycoma Longifolia have also been found to contain mercury and/or lead. As a result, WebMD lists the ingredient as “POSSIBLY UNSAFE when taken orally in large amounts.”

Symptoms of lead poisoning include:

Symptoms of mercury poisoning include:

Zinc is an essential mineral which is proven to raise T, enhance fat loss, raise energy levels and lift your mood.

Less a vitamin and more a steroid hormone, D3 is perhaps the most-important T-boosting ingredient on the market.

In-depth research shows it boosts both free and natural testosterone, while also making you stronger and increasing muscle mass.

D-Aspartic Acid (D-AA) is an amino that plays a key role in your testosterone levels. It prompts your brain to create and release more of the Luteinizing Hormone (LH), which is a T major precursor.

D-AA also works on the Leydig cells in the testes to help convert cholesterol into testosterone, which makes more of the male hormone available in your system.

Overall, Androgenix is far from being one of the best T-boosters on the market.

What’s good about it?

The lone study on Ginger as a potential T-booster show impressive results – in a fair test, a 17.7% boost in levels of the male hormone is worth shouting about.

What’s bad about it?

The fact that it only contains two ingredients (Ginger and Longjack) holds it back. The formula would be so much better with the addition of just 2-3 key nutrients.

And there’s only sparse evidence that Ginger boosts testosterone. The existing research was industry-funded, which is enough to cast doubt over the striking results of that one study. Meanwhile, the only good Longjack offers is a healthy libido.

When we saw the price for Androgenix, we nearly choked. For $35.99, you have the right to expect much more than two paltry ingredients. What a joke!

There are so many better T-boosters out there.

So if you’re looking for a potent and safe testosterone booster, we strongly suggest you look elsewhere.