But the brand is getting some decent reviews, so we’re keen to see whether this product really is worth buying…

Available at around $50, Sergeant Steel is a premium testosterone booster. However, we tend not to trust any supp claiming to be the “strongest ever”.

After all, the best nutrition brands tend to include the amounts required for optimal performance in their supps. Reputable manufacturers don’t just pack their formulas with the highest levels of certain ingredients allowed by law – proper nutrition is more complex than that.

So, let’s dig deeper to see whether Assault Labs and Sergeant Steel are any match for the better-known fitness brands and testosterone boosters out there…

There is very little information about Assault Labs online. In fact, we couldn’t find the brand’s website, so we’re not going to waste our time trying to unearth info about it.

We can’t tell whether this product is made by a real company or just some guy in his basement (which is worrying, to say the least).

We were disappointed to find levels of vital nutrients like Vitamin D (1500 IU) and magnesium (50mg) are much lower in Sergeant Steel than we expected.

To be fair though, we were pleased to see Sergeant Steel doesn’t include any proprietary blends. 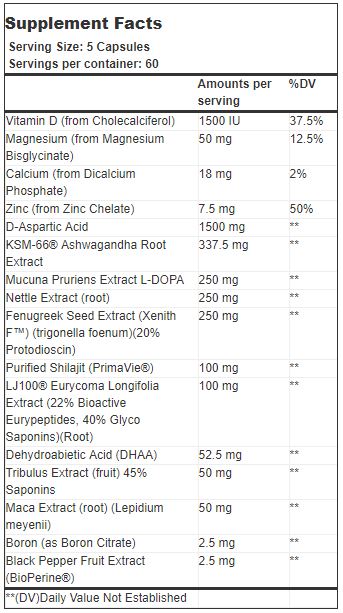 D-Aspartic Acid (D-AA) is an amino acid. It’s one of two forms of aspartic acid (the other is l-aspartate), but D-AA is the only one with muscle- and testosterone-boosting properties.

D-AA plays a key role in your brain’s ability to produce the Luteinizing hormone, which is an important precursor to testosterone growth.

Anyone who knows their stuff will tell you D-AA makes a real difference to your workouts.

And although this ingredient does appear naturally in meat and dairy products, it’s fair to say we don’t get enough of it in our diets.

But while we were pleased to see D-AA in the Sergeant Steel formula, we don’t think there’s enough of it here either. This product contains 1500mg, but we find larger amounts of between 1600mg and 2300mg to be better for boosting testosterone.

Ashwagandha has its roots in Indian herbal medicine (Ayurveda). It’s also known as poison gooseberry, Indian ginseng and winter cherry. The herb is an adaptogen – a chemical that helps your body cope with physical stress and improve semen quality.

And there is a lot of evidence to show Ashwagandha reduces cortisol – your body’s primary stress hormone – in those suffering from chronic stress.

After all, stress can damage testosterone levels. So it follows that, as a cortisol-buster, Ashwagandha would be useful in a supp like Sergeant Steel…

However, most of the research on Ashwaghanda as a testosterone booster did not involve athletes or trained individuals. So while Ashwaghanda does boost T-levels in infertile or untrained men, we can’t be sure of the benefits for healthy people.

Found in India and other sub-tropical climates, this plant has been used for thousands of years as a sexual tonic.

It contains L-DOPA, which acts as a precursor to dopamine – a feel-good chemical. Mucuna pruriens also helps boost testosterone by limiting prolactin (which reduces T-levels) in your body.

We were pleased to see mucuna pruriens in this supp, although 250mg is a little too low – 300mg would have been optimal.

Nettle extract (also known as nettle root and urtica dioica) is widely used as an aphrodisiac.

It boosts testosterone by binding to the Sex Hormone Binding Globulin (SHBG) and allowing more testosterone to flow through your bloodstream.

But while we’ve noticed this supp doesn’t contain enough of some vital ingredients, the same isn’t true here – this time, we reckon it’s overdosed. Sergeant Steel uses 250mg of nettle extract, but 160mg is optimal in a T-boosting supp.

Fenugreek is another ingredient on this list with roots in India and Arabic countries.

It’s no surprise to see Fenugreek in a T-booster, as it’s proven to raise testosterone levels and to promote the free flow of the male hormone in the bloodstream.

This nutrient helps cut fat and boost your sex drive, as well as lowering Dihydrotestosterone (DHT), which in turn reduces risk of hair loss and prostate cancer.

Short of eating lots of Indian or Arabic food, you won’t have a lot of chances to include Fenugreek in your diet, so it’s best to take it in a supp.

But in our opinion, Sergeant Steel uses too much Fenugreek (250mg) – 100mg is more than enough.

Shilajit is a thick, tar-like compound primarily found in the Himalayas and its other names include salajeet, mineral wax and mineral pitch.

While popular in Russia, the compound is not very well-known as a supp in the West. Rich in minerals (85, to be exact), shilajit is the most-natural source of fulvic acid, which protects cells from oxidation.

But despite being used to prevent illness for thousands of years, shilajit is yet to undergo large-scale testing.

During two studies, subjects were given 200mg of the compound over 90 days. At different times, infertile male subjects and men aged between 45 and 55 experienced notable testosterone boosts.

But it’s worth noting the dose used in both studies was double that in Sergeant Steel. As a result, there’s no way of knowing whether the 100mg in this supp will have much effect on T-levels at all.

Eurycoma Longifolia Extract (EIJ) is the name for the herb more commonly known as tongkat ali, longjack and Malaysian ginseng.

A staple of traditional Asian medicine, EIJ contains bio-active ingredients which are believed to boost the male libido, relieve stress and increase strength.

And research does prove that compounds found in the herb, such as eurycolactone and eurycomaoside, improve sexual performance. But studies also show EIJ is not a potent T-booster. Simply put, there are other ingredients out there which do a much better job of boosting your testosterone.

Its job is to prevent your body from converting testosterone into estrogen, which in turn stops you from growing man-boobs. That said, there are few studies to show that DHAA works for this purpose.

Besides, aromatase inhibitors are only necessary if you’re using steroids. And as Sergeant Steel doesn’t contain any steroids, its use of DHAA seems pointless.

Tribulus extract comes from the Bulgarian Tribulus Terrestris plant and their names are used interchangeably. In fact, the plant also goes by the names of Protodioscin, Goat’s Head, Devil’s Weed, Puncture Vine, and even Trib (for short).

In the 1970s, tribulus became popular among Bulgarian weightlifters looking to increase strength and performance. However, some observers speculate their use of the plant was a good way of masking less wholesome activity; this was at a time when doping was rife behind the Iron Curtain.

In truth, there’s very little proof that tribulus has any effect on strength, performance, or T-levels in general.

Maca root (also known as Peruvian ginseng) is part of the broccoli family and looks like a turnip. It hails from the Andean mountains of Peru and has been a staple of traditional medicine in the region for centuries.

It’s a very nutritious plant as it contains sterols, fatty acids and a number of vital nutrients.  Maca root also contains the compound p-methoxybenzyl isothiocyanate, which is said to boost sex drive and fertility.

Despite this, maca has no effect on testosterone at all. And because higher testosterone alone is enough to increase sexual potency and performance, there is no need for maca in a supp containing genuine T-boosters.

In one study, men who took 10 mg of boron every for a week. Analysis showed the metalloid significantly reduced levels of SHBG, which increased free testosterone levels by 28% and lowered estrogen levels by 39%.

In another study, male subjects took 6mg of boron every day for 2 months, which led to a 29.5% boost in free testosterone.

The ingredients in Sergeant Steel are generally safe. However, some people may experience:

As we mentioned earlier in this review, no reputable fitness brand should ever sell a testosterone booster on the basis of its strength. After all, strength isn’t always optimal in terms of ingredient amounts.

As it turns out, Assault Labs underdosed the Sergeant Steel formula in some key ingredients (D-AA, mucuna pruriens) and added too much in others (fenugreek, nettle extract). This product also includes ingredients, such as tribulus and maca extract, which simply don’t work as testosterone boosters.

Assault Lab’s lack of online presence is also a cause for concern. The absence of a brand website makes it unclear whether Sergeant Steel is made by a real company or a couple of teenagers in their parents’ garage.

Sergeant Steel is far from the revolutionary product it claims to be. We advise spending your money on a high-grade testosterone booster with ingredients proven to help achieve your fitness goals.