This is a testosterone booster from BioTech USA (who appear more popular in europe than they do in the USA, which is strange, considering their company name).

But first, let’s find out more about Biotech USA.

You would guess that Biotech USA’s main market would infact be the USA. However, this doesn’t seem to be the case here; we found that this company’s supplements were more popular in European countries such as France.

We didn’t learn much from their ‘about us’ section on their website, so we decided to have a look around google to see if there was more info elsewhere. Fortunately, we found some supplement stores claiming that Biotech USA had been around for ‘more than 20 years’ (but we’re not sure whether the site updated this since they wrote it, so it might now be closer to 30…)

Anyway, nothing too useful in this section, but we promise that the next one will be more entertaining.

Alright, so we promised you some useful information here, and that’s exactly what you’re going to get. Here, we’ll take a look at Wianabol’s nutrient profile, so you can see how effective the ingredients are – and more importantly, whether they’ve been optimally dosed.

But you’ll see that Wianabol’s supplement facts containings MASSIVE amounts of ingredients. We’d be here all day, and we don’t want to be here until christmas (if you’re reading this during the festive period, then happy Christmas by the way), so we’ll analyze the ingredients that we think are the most significant in Wianabol – to save you time that you could use to make gains.

As a guideline, we recommend that you avoid supplements containing over 10 nutrients; usually, these kinds of products contain underdosed ingredients, meaning they might be impressive when you look at the supplement facts – but they won’t actually work.

It’s also important to know that almost every ingredient can be found inside proprietary blends; these are mixtures of numerous ingredients hidden in blends, so you can’t see the exact dosage of individual nutrients inside (only the overall amount of each blend is provided). 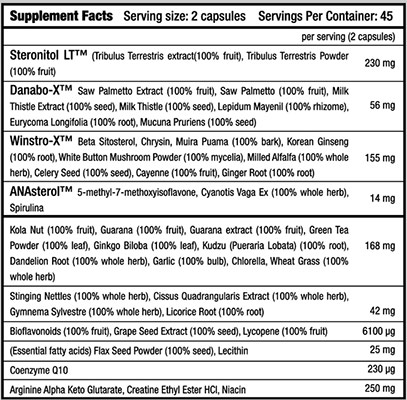 This is actually one of the ingredients that we recommend you to stay away from.

Why? Answer: studies have shown that tribulus is ineffective and can cause a potentially harmful side effect – an increase in prostate weight.

In summary, tribulus isn’t going to raise your test levels and can cause a side effect. Not something you want in a supplement that you’re spending your cash on…

We just mentioned that tribulus terrestris doesn’t work, but can cause a side effect. Well, this is the case with saw palmetto too (see our side effects section further down for more information on this).

Right, so this is a great addition to a fat burner supplement. But remember that Wianabol is a testosterone booster here.

Simply put, cayenne pepper extract has proven to raise your metabolism due to being an effective thermogenic nutrient. However, it’s not going to have any effect on your testosterone levels – making it an ineffective ingredient inside Wianabol.

We’ve decided to group green tea powder here too, as this is another ingredient that’s proven to be effective at helping you shred fat – but doesn’t have any effect on your testosterone levels.

In a nutshell, if you want to lose fat, then you’d benefit more from a fat burner supplement. But we’re guessing you’re here to raise your T levels, in which case neither cayenne pepper or green tea extract are useful.

This is a herb that’s shown to help protect your liver. But it’s important to know that only steroids can damage your liver; as Wianabol is a natural test booster, there’s really no risk of harming your liver.

Ultimately, companies add milk thistle to try and fool you into thinking their product is stronger than it is. So don’t be tricked into their marketing here…

All you need to know is that milk thistle isn’t needed here and won’t have any effect on your T levels.

We’re really not sure why Biotech USA has included this stimulant in Wianabol. That’s right, guarana extract is a stimulant thought to deliver similar effects to caffeine.

In a nutshell, testosterone boosters don’t need to contain any stimulants. So we would have preferred to see a nutrient that’s shown to enhance your test levels instead here (such as Vitamin D3).

You might be wondering why a company has added dandelion root to their supplement. Well, this has shown to be an effective diuretic (meaning it promotes you to pass more urine).

This results in your becoming less hydrated, making you look like you’ve lost body fat. But don’t be fooled – once you stop taking this product, the ‘fat loss’ will be right back.

But the worst thing about dandelion root is that it can cause you to become too dehydrated, which can in-turn cause side effects. As a result, we recommend staying away from supplements containing dandelion root.

In a nutshell, stinging nettle extract isn’t as effective as key test boosting ingredients such as Vitamin D3 or Fenugreek Seed Extract, but it’s still shown to work.

Also known as Asian Red Panax Ginseng, this is another ingredient shown to boost your testosterone levels.

It’s also quite an efficient ingredient, meaning you don’t need large amounts for it to work – studies have shown that small quantities from 100mg can be effective at raising your T levels.

As a result, panax ginseng is one of our favorite ingredients that you can find in testosterone booster supplements. Good job by Biotech USA here.

Why? Answer: licorice has shown to decrease testosterone levels in numerous studies, which is the opposite of what you want when buying a test booster supplement.

In fact, one study showed that your T-levels can fall by as much as 31% after consuming commercial licorice products. As a result, you can probably agree that it’s better to avoid testosterone boosters containing licorice root. 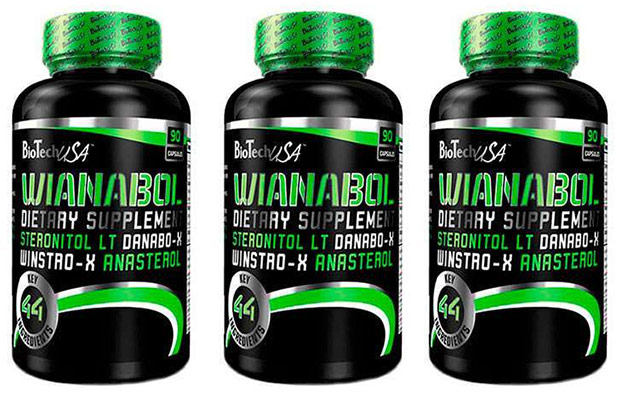 The main concerns we have with Wianabol, is that it contains a diuretic (dandelion root) and tribulus terrestris.

In case you missed our section above; dandelion root can cause you to become dangerously dehydrated if you’re not aware that you’re consuming a diuretic (you should always increase your water intake when consuming this nutrient).

But the worst thing is that tribulus terrestris has shown to cause your prostate to gain weight – which can lead to serious male health issues in the future.

Actually, this is probably the worst part; Wianabol contains licorice, which has proven to decrease test levels in numerous studies.

As a result, we recommend that you avoid supplements containing these ingredients to stay safe. Especially testosterone boosters containing licorice, unless you want to waste your money.

Biotech USA has made a big mistake by adding licorice into their testosterone booster, Wianabol. Basically, licorice has shown to reduce your test levels by as much as 31% in numerous studies – which is the opposite of what you want when buying a test booster supplement.

Not only that, Wianabol only contains 2 nutrients that’s proven to raise your test levels, while containing ingredients that can cause side effects (as you can see in the above section).

As a result, we can’t recommend you to try Wianabol. We believe you would experience higher testosterone levels by looking at better options.