As you should know, Cellucor have a great reputation in the supplements industry. And part of this has been built through their testosterone boosters – such as this series of P6 products.

In theory, this sounds like the perfect product – an increase in testosterone will help you build more muscle, and the thermogenic ingredients should help you lose fat.

So let’s see whether P6 Ripped can live up to its claims in this review. Take a look:

Cellucor is a sports nutrition company that was founded in 2002. As we mentioned, they’ve built a great reputation for themselves with their P6 line of test boosters.

They’re probably just as well known as their other products. But we’re here to review P6 Ripped, a testosterone booster/fat burner hybrid – so that’s what we’re going to do.

First things first. We have to address the elephant in the room here; P6 Ripped contains 2 proprietary blends, which is something we hate seeing.

Why? Answer: Because they hide the dosages of each nutrient, only showing you the overall quantity instead.

To understand what we mean; take a look at the ingredient list below, and look at the ‘P6 Testosterone and Performance Blend’. You’ll see that the overall quantity is 950mg, but you’re not shown the dosages of each nutrient.

Ultimately, this can lead to numerous side effects (especially when a blend contains caffeine – which the second one does). 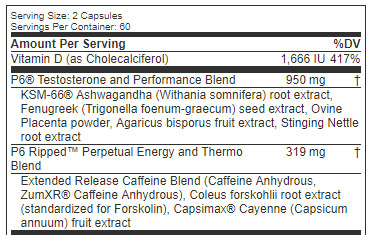 Vitamin D3 is a key ingredient for boosting testosterone levels. It’s technically a hormone and has proven to raise T levels and general health – making it perfect for a testosterone booster supplement.

We said testosterone a lot there didn’t we…But all you need to know here is that Vitamin D3 works.

While this is the only ingredient that hasn’t been added into a proprietary blend; Vitamin D3 has been underdosed (studies show that you need at least 3,332IU for this to work).

You’re probably expecting us to criticize this whole blend. But ashwagandha is actually a great ingredient – it’s shown to improve your strength levels in the gym.

However, it’s not shown to have any effect on your testosterone levels; so we don’t think it’s needed in a testosterone booster.

We would prefer nutrients shown to directly enhance your T levels instead, but ashwagandha isn’t bad at all and doesn’t cause any side effects.

But you know the problem here already – Fenugreek is inside a proprietary blend, so you don’t know the exact quantity inside P6 Ripped.

In a nutshell, if an ingredient is underdosed then it won’t work – regardless of how effective it can be. As a result, this is the main reason why we hate proprietary blends.

Can you seriously look at the name of this ingredient and want to consume it? We definitely don’t, and it’s not shown to actually raise your T levels either…

This is on the same level as tribes eating the heart of animals to ‘gain their strength’. No studies have backed that ovine placenta powder actually works, so we’re staying away from this one.

This is the first time we’d seen Agaricus Bisporus Fruit Extract in a test booster; it’s an edible mushroom that’s thought to inhibit the conversion of testosterone to estrogen.

However, this isn’t needed. Why? Because no natural test booster is strong enough to cause this side effect (only pro-hormones and steroids will).

As a result, this is an unnecessary addition to P6 Ripped.

If you’ve ever touched this plant, then you know that it can ‘sting’ you. Well, that’s why it’s called Stinging Nettle Root Extract.

But here’s what you need to know; it’s shown to slightly raise your testosterone levels in dosages of 100mg and above.

However, as it’s inside a proprietary blend, no-one knows the exact dosage inside. Again, this is a prime example of why these blends are bad.

You’re probably wondering – “is this a blend within a proprietary blend?”. Well, the answer is ‘yes’.

And it isn’t a good thing either. Remember at the start we mentioned that caffeine in blends are bad? Well, this is because large dosages of this stimulant can cause side effects such as jitters and energy crashes.

For this reason, we never recommend you to consume caffeine when contained in proprietary blends. You should always consume under 250mg caffeine per serving at first – after this, you can judge your tolerance levels and consume more if you need.

This sounds like a strange ingredient, and there’s a high chance you haven’t heard of it either. Well, this is because coleus forskohlii is a fairly new addition to supplements.

However, while it’s shown promising results to lower your body fat; coleus forskohlii hasn’t proven to raise your testosterone levels.

For this reason, it’s not a great addition to a testosterone booster supplement – but as P6 Ripped is designed to be a ‘hybrid’, it might be useful here.

But we don’t believe there’s any need for this hybrid product – if you want to build muscle and boost testosterone, then buy a specialized test booster supplement.

If there’s one ingredient that you’ve heard about on this list, then it’ll be cayenne pepper extract.

In case you don’t know; cayenne pepper is a chilli that’s known for it’s spice and containing high amounts of capsicum.

So what does this do? Well, it’s a thermogenic (so it raises your body heat, encouraging your body to burn more fat by regulating it’s temperature).

However, it has no effect on testosterone levels. We believe this has been added due to P6 Ripped being a ‘hybrid’ test booster/fat burner product.

But like we’ve already mentioned, you can’t build muscle and burn fat at the same time (most of the time, anyway). 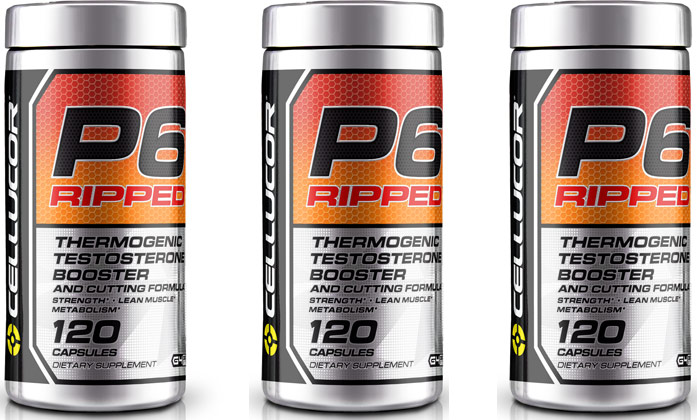 While ovine placenta powder sounds disgusting enough to put you off from your dinner…it’s not shown to cause side effects.

However, as caffeine has been placed into some sort of ‘inception’ blend (within a proprietary blend) – this can cause jitters and energy crashes.

See the list of side effects P6 Ripped can cause:

We never understand why companies feel the need to add LOADS of ingredients into their products. However, as P6 Ripped are charging $99 for each container, they could’ve dosed everything optimally – but they haven’t.

Instead, Cellucor have decided to add every ingredient (apart from Vitamin D3) into a proprietary blend; ultimately, this makes it likely that nutrients have been underdosed.

As a result, we don’t believe Cellucor P6 Ripped is worth anything near $99. In fact, the best test boosters on the market are priced under this.