We’re enjoying seeing what other countries have to offer at the moment, and Eiyo Testo HT is another product that’s very popular in Europe (especially France), but hasn’t made an impact in the USA.

We’re surprised that Eiyolab didn’t formulate Testo HT to improve your libido (which should be a benefit of all test boosters available). However, we’re interested to see which ingredients are inside, so read on to find out.

We tried to find this company’s website quickly, but we failed. But in at fairness, this could be because it’s a French company that haven’t tried to penetrate other markets in the world.

One thing we do know though, are what ingredients make up Testo HT’s nutrient profile. So let’s take a look.

One thing that we’re always happy to see, is an ingredient list without any proprietary blends; Eiyolab has made a great decision by not including any, so you can see the dosages of each ingredient inside Testo HT.

However, we’re slightly disappointed that they’ve made tribulus terrestris the ‘main event’ (its the highest dosed nutrient inside this test booster). We’ll explain in more detail why, as well as taking you through the pros and cons of Testo HT later on in this review. 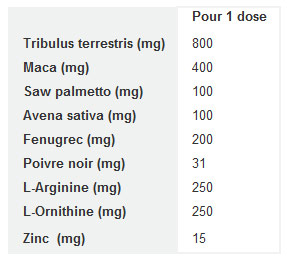 This is a herb that’s been used in traditional Indian medicine for a long time. It’s been believed to improve your sex drive and testosterone levels, but recent studies have shown that it has no effect on your test levels.

While it can slightly raise your libido, it’s not worth risking its side effect – increased weight of your prostate.

As a result, we don’t recommend you to consume this ingredient, as there are many others (such as vitamin d3) that are proven to raise your T levels while keeping you safe from side efects. This is also why we said that we’re disappointed that Eiyolab made this the ‘main event’ in Testo HT.

Maca is a vegetable that’s species of the broccoli family, and has been used as an aphrodisiac for a long time.

However, there are 2 problems; the first being that you need to consume 1,500mg Maca for it to raise your libido (while there’s only 400mg in Testo HT), and the other is that Maca hasn’t proven to raise your test levels.

Personally, we wouldn’t add Maca into a test booster – we only really want nutrients that’re shown to boost T levels, and there are some that can also raise your sex drive too (such as Fenugreek).

As a result, Maca isn’t the best addition to Testo HT here.

If you’re wondering what this is, then you might know it better as ‘plain oats’; yes, this is the same stuff you add to your porridge in the morning.

As a result, it can be a great carbohdyrate to add to your diet, but it has no effect on your testosterone levels (making it an unnecessary addition to Testo HT).

Fenugreek is another herb that’s been used for decades in traditional Indian medicine, but it’s still commonly added to curries too.

And you’ll be glad to hear that fenugreek is a key addition to any test booster supplement; this is because it’s proven to raise your test levels, raise your libido and even help treat diabetes.

Not only that, you only need a 50mg dosage of fenugreek for it to work – so it’s not hard to dose correctly either. Good job by Eiyolab here.

We always say that black pepper extract is more of a useful addition, rather than a key ingredient in any supplement.

As it’s in a capsule, you won’t taste it. So why’s it been added into Test HT? Answer: black pepper extract can improve the absorption rate of other nutrients that it’s consumed with.

In a nutshell, consuming black pepper extract along with key nutrients will help them benefit you more. However, as we mentioned, you won’t exactly lose any benefits by not consuming this ingredient either.

Another mistake by Eiyolab. Basically, they’ve added l-arginine into Testo HT to try and improve your blood flow (which could improve your erections, as well as muscle pumps in the gym).

But there’s 2 bad things here; l-arginine has no effect on your testosterone levels, and has a poor absorption rate (meaning it’s mostly ineffective when orally supplemented anyway).

If you’re looking to improve your blood flow and muscle pumps, then Citrulline Malate is the best ingredient for this benefit.

This i an amino acid that plays an important part in the urea cycle; it’s believed to reduce elevated ammonia levels when orally supplemented.

However, you don’t really need a reduction in ammonia levels, as a normal, healthy person won’t have problems with this.

Ultimately, l-ornithine has no effect on your testosterone levels – making it an ineffective nutrient in Testo HT.

Zinc is an mineral that’s shown to positively affect your testosterone levels. However, we never consider this a key ingredient, as most test booster supplements on the market contain it.

But the good news is that it works. We usually recommend that you only consume 10mg from supplements (as foods such as oyster contain high amounts of zinc) and the safe limit for this mineral is 40mg per day.

However, realistically, a 15mg dosage won’t put you at risk – you should only be concerned when there is over 20mg zinc in supplements. 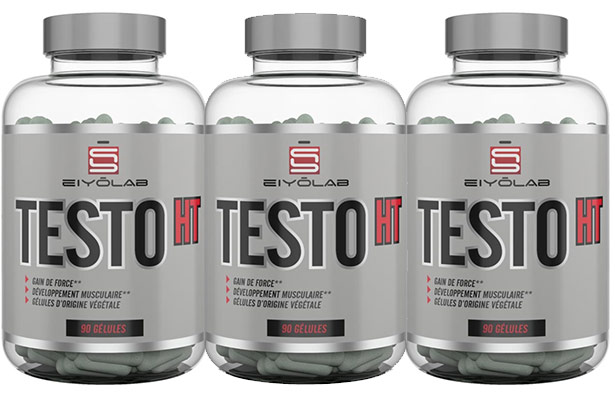 The only ingredient in Testo HT that can cause side effects is tribulus terrestris. If you read the section above, then you’ll know that tribulus terrestris can increase the weight of your prostate; this isn’t good, as it can lead to serious male health issues in the future.

However, the good news is that tribulus is the only concern in Testo HT.

Not what you’re looking for? See our
– Top 3 Test Boosters Here –

After taking a deeper look at Testo HT, we’re actually surprised that it’s so highly rated in France. It doens’t contain the right ingredients to really make a difference to your testosterone levels (making it a mostly ineffective product).

Not only that, Testo HT contains tribulus terrestris, which can cause an increase in your prostate weight, which isn’t good. As a result, we recommend that you avoid this ingredient in the future.

But on a positive, note, Testo HT does contain some nutrients that’ve shown to raise your sex drive. But if you’re looking to boost your test levels, then you’ll be better looking at other options.