Whether you’re looking for a supp to fuel your pre-workouts, stack up on protein, boost T or stay hydrated – you can bet Kaged Muscle offers something for you.

But are they any good?

We’ve reviewed the company’s Pre Kaged pre-workout supp before and weren’t too impressed – so we want to see whether Ferodrox can testosterone booster fare any better.

Online reviews for Ferodrox are a bit of a mixed bag – we’ve seen some glowing testimonials and a few a awful ones. So what’s the truth? Let’s dig a little deeper…

Kaged Muscle is well-known across the world for making and selling expensive sports supplements – and many of the company’s products boast stellar reviews online.

As we look over the ingredients in the Ferodrox formula, we can’t really see anything special to justify its high price ($58.99 for 60 tablets). 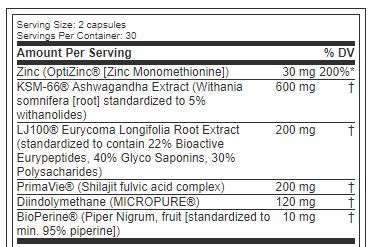 Ashwangandha also goes by the names of Indian Ginseng, Poison Gooseberry, Withania Somnifera, and Winter Cherry. The herb hails from India and has been used in traditional medicine for over 3000 years.

As a potent adaptogen, Ashwagandha is proven to reduce cortisol – the body’s main stress hormone – in the blood.

This is useful in a T-booster because stress can impede muscle development.

In addition, a study published in the Journal of Ethnopharmacology suggests Ashwagandha may increase T-levels in infertile males and in men undergoing strength training.

We see Eurycoma Longifolia Jack (EIJ) a lot in T-boosters – perhaps more than you realize, as it’s another ingredient on this list with a stack of different names.

Legend has it Longjack makes your erections AND your muscles stronger, as well as combating stress and high blood pressure.

This belief persists because Longjack contains eurycomaoside and eurycolactone, which help convert estrogen into testosterone.

However, there’s no concrete proof to show Longjack supplementation can boost your T-levels.

While one study suggested it could boost testosterone by 46%, these findings are unsound given that researchers used no placebo as a control to measure the potency of the herb.

Shilajit Fulvic Acid is a natural compound found in the Himalayas. It’s used in Ayurveda medicine and is thought to prevent ageing, asthma and a host of other ills.

Many dry powder forms of Shilajit are banned in Canada due to their high levels of heavy metals. They also remain unapproved by the FDA in the US.

But can it boost testosterone?

The results of human studies do show some promise. During one study by Biswas et al, 200mg of Shilajit boosted T-levels in infertile men by 23.5%. However, it’s still unclear whether Shilajit achieves the same results in fertile men.

A second study showed similar results in men aged between 45 and 55.

But this research was directly funded by a manufacturer of the product – and this raises a red flag. We recommend only using ingredients subject to independent tests by researchers without vested interests in the results.

Your body produces Diindolymethane (DIM) when you eat broccoli, kale, cauliflower and other members of the Brassica family.

These vegetables contain the compound indole-3-carbinol (I3C), which has anti-carcinogenic properties – this is why eating your greens can help fight cancer. But in terms of whether DIM can boost T-levels, the results are less clear.

It’s almost certainly true the compound can stop the sex-hormone binding globulin (SHBG) from inhibiting the free-flow of testosterone. However, the available research focuses on the use of I3C as a precursor, rather than DIM in isolation.

For this reason, we advise eating plenty of broccoli or kale instead – at least until the results of further research become available.

Bioperine is a modified form of Piperine (or Black Pepper Extract) – and it’s a staple in many great (and not-so-great) T-boosters.

Black Pepper Extract boosts the absorption of other nutrients and makes them more potent. This supp contains 10mg of Bioperine, which is the optimal amount for boosting T-levels.

Bioperine is particularly useful for men over 30 who want to restore their T to youthful levels.

But as some of the other ingredients in Ferodrox aren’t proven beyond doubt to be effective, this may shrink the potency of Bioperine in the supp.

As you’d expect from a brand known for its premium supplements, Kaged Muscle Ferodrox is largely safe to take.

However, there are very few studies on the long-term effects of Ashwagandha, Eurycoma Longifolia, or Fulvic Acid.

Despite our previous disappointment when reviewing other Kaged Muscle supps, we wanted more from Ferodrox.

A lot of these ingredients show promise for their supposed ability to boost Testosterone. But when you buy a high-grade product, you want the gains you get to be worth the dent in your wallet.

It’s just not good enough to include ingredients that MIGHT boost testosterone. When you fork out 60 dollars for a T-booster (with just 60 tablets), you need to know it WILL work.

While it’s true even the best T-boosters are not for everyone, you expect (at the very least) for such a pricey supp to include ingredients backed by decades of research.

If this supp was half the price, we would’ve given it 3 stars. But as it’s so expensive, it doesn’t deserve more than 2.

So here’s our advice: Ignore Kaged Muscle Ferodrox and spend a little less on a T-booster with proven power.