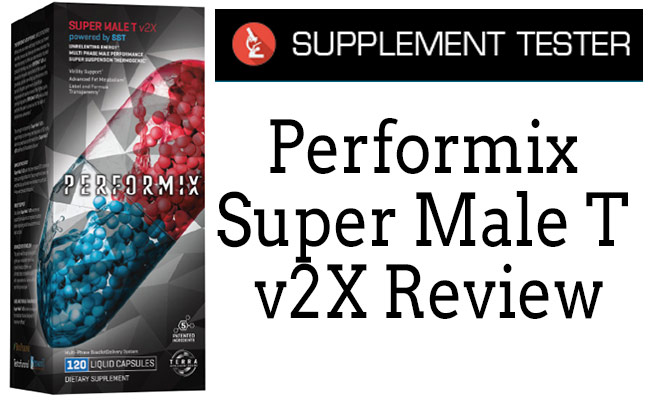 This testosterone booster by Performix was one of their latest releases in 2017. We know Performix v2X for their ‘terra beads’ which they use in all of their products; these are supposed to deliver an ‘advanced multi-phase extended release’ of ingredients, so they benefit you for longer.

However, no studies have proven this actually works yet (obviously apart from the tests they’ve carried out themselves).

It’s strange that Performix have tried to make this test booster help you burn fat (this is what fat burner supplements are for…). Anyway, we’ll examine what’s inside after telling you about Performix.

Performix are a supplements company that pride themselves on their ‘premium’ supplements. As we’ve mentioned, they all contain their ‘terra beads’ techonology which is believed to make supplements work for longer periods of time – although no independent studies have proven this.

We don’t like the look for Super Male T v2X’s ingredient list – it contains 2 massive proprieatary blends, so we don’t know the exact dosages of each ingredient inside.

However, this test booster does contain some great nutrients such as Fenugreek Seed Extract, Vitamin D3 and Mucuna Pruriens. Let’s see if this is enough to make it worth paying for.

A great start by Performix here, as Vitamin D3 is one of the best nutrients shown to boost testosterone levels. However, you need at least 3,332IU per serving for this to work.

We did the necessary calculations, and Performix Super Male T v2X only contains 125IU – making it ineffective here.

This is a great example of why dosing nutrients right is important.

If we were to review every single ingredient inside this product, then we’ll be here all night writing – and you’ll probably fall asleep after becoming too bored.

As a result, we’ll pick the most important nutrients in Super Male T v2X to examine. This will save everyone time, and you’ll still be able to see whether it’s a test booster worth trying out.

Just remember that no-one knows the exact ingredients inside, as all of them are part of proprietary blends.

Fenugreek is a key test boosting ingredient as it’s shown to work in numerous studies. In a nutshell, this herb improves both your testosterone levels and libido – exactly the kind of benefits you want when taking a T-Booster.

The first ingredient on the list that’s not shown to do much. Basically, this herb has shown to be ineffective in numerous studies conducted – but that’s not all…

There’s a direct link between Tribulus and an increase in prostate weight. As this is can lead to severe health issues, we recommend avoiding this ingredient.

This plant is part of the broccoli family, and has been used as an aphrodisiac throughout history; it’s shown to raise your libido, but has no effect on your testosterone levels.

As it hasn’t proven to boost your T, it can’t be considered a key ingredient in Super Male T v2X. However, a boost in libido is still useful here.

Otherwise known as Epimedium, this has been used as an aphrodisiac (as well as erectile aid) in traditional Chinese medicine.

As a result, we consider this to be an unreliable ingredient here.

Also known as Eurycoma Longifolia, this herb has shown promising results in being anti-estrogenic and strengthening your erections (as well as libido).

However, it’s not proven to have any effect on your testosterone levels. As a result, longjack extract is another unreliable ingredient in Super Male T v2X.

Now, this is one of the ingredients we avoid in test booster supplements. Basically, DIM is known for it’s ability to stop T converting into estrogen.

However, it’s important to know that natural T-Boosters aren’t strong enough to encourage your body to begin turning test into estrogen in the first place – only steroids will do this.

So companies often add DIM into their supplements to trick you into thinking their product is equally as strong as steroids…but you won’t find a natural alternative that actually is (which is why you don’t need to take any supplements to protect your organs when taking them).

Not only that, DIM can cause a side effect; it can actually encourage your body to convert testosterone into estrogen when consumed in large dosages.

As this is part of a proprietary blend, no-one knows the exact dosage inside – meaning you’re at risk of suffering from this side effect.

Performix has labelled this as ‘L-Dopa’ but this is simply like calling cocoa beans ‘Theobromine’ – it’s part of the ingredient, but it’s not in it’s purest form (as you can see from the ingredient list, it only contains 40% L-Dopa, which isn’t even a bad thing).

This is the second proprietary blend contained in Super Male T v2X; so remember that no-one knows the exact dosage of any ingredient inside (unless Performix have provided it).

They’ve given you the dosage of Caffeine here, which is interesting; this tells us that they actually know the negatives of adding proprietary blends in their products – so why didn’t they simply not add any proprietary blends?

We’ll let that sink in, while we examine the ingredients inside here:

Caffeine is our favorite stimulant in both fat burners and pre workout supplements; it’s proven to be safe and effective, to help you on your fat burning journey.

However, you need check how much caffeine you’re consuming; large dosages can cause side effects such as jitters and energy crashes.

Performix has added 250mg caffeine in Super Male T v2X, which is actually a sensible dosage. So you’ll be safe from these side effects here.

But caffeine isn’t needed in testosterone boosters – it’s not shown to have any effect on your T levels, making it an ineffective ingredient here.

This herb has shown to improve your strength and reduce anxiety levels. However, no studies have shown that it positively affects your testosterone levels.

As a result, this is unreliable when added into T-Boosters. But the good news is, Ashwagandha doesn’t cause any side effects.

This is another stimulant that’s thought to offer the same benefits as caffeine. However, the problem is this; Theacrine hasn’t been studied as much, meaning it’s not 100% sure whether it’s safe or effective.

As a result, we’ll avoid this stimulant for now – until there’s further research proving that it works. Not only that, having 2 stimulants in 1 product is never a good idea…

No-one knows the exact dosage inside Super Male T v2X (as it’s part of a proprietary blend); ultimately, this increases your risk of suffering from jitters and energy crashes.

Not only that, as we’ve mentioned, stimulants aren’t needed in test boosters anyway – making Theacrine an unnecessary addition to Super Male T v2X.

Cayenne Pepper Extract is a key fat burning ingredient as it’s proven to work. It’s shown to raise your body temperature, which boosts your metabolism (allowing you to use more fat as fuel).

However, as this is a test booster supplement, it’s not really needed here.

Now, this is another ingredient that we always avoid. It’s banned in countries such as the UK and Canada for a reason – it caused numerous side effects.

There’s no need to use ingredients that have shown to be potentially harmful; there are many safe and effective nutrients out there.

As a result, we recommend you to stay away from Yohimbine on your search for the best test booster supplement. Not only that, it’s not even needed here, as Yohimbe has no effect on your testosterone levels.

Huperzine A is a believed to enhance your cognition. But this isn’t needed in a test booster supplement (the main reason you buy these supplements is to boost your testosterone levels…not increase your focus).

Not only that, Hupezine A has been reported to cause numerous side effects – see our side effects section for more info.

This is the same black pepper you add to your meals, but it’s also shown to improve the absorption rate of supplements. It’s not going to make an average product great – but it’s a good bonus ingredient to have.

However, as Super Male T v2X contains some potentially harmful ingredients, improving the absorption rate of this test booster might not be a good thing… 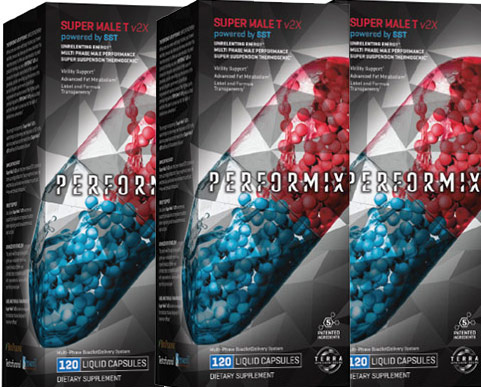 Here’s the bad news; Super Male T v2X contains many ingredients that can cause side effects. Not only that, proprietary blends increase your risk of side effects too.

You might suffer from these when taking this test booster:

Not what you’re looking for? See Our
– Top Three Test Boosters Page Here –

We don’t like supplements that contain over 10 ingredients to 2 reasons; they take a LONG time to review…and more ingredients usually result in companies underdosing most ingredients inside.

After taking a look at the ingredient list of Super Male T v2X, it’s clear to see that Performix has underdosed most of the nutrients inside this testosterone booster. In fact, this is the reason why companies use proprietary blends – to hide the fact that they’ve added bad dosages of ingredients.

As a result, Super Male T v2X isn’t as good as the best test boosters on the market. In fact, it doesn’t even come close to them.