Raw IGF-1 is a natural testosterone booster marketed by Vigor Labs, which is “designed to give you optimal results in training”.

We’ll take a look at whether this product is worth trying out in this review: 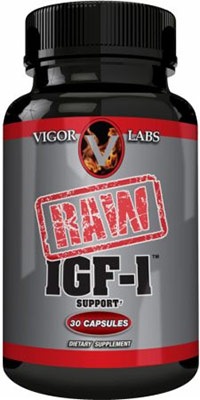 Vigor Labs are a supplements company that offers a range of products, from testosterone boosters to fat burners.

We’ve analyzed all the ingredients to see whether Raw IGF-1 is an effective product overall. See for yourself: 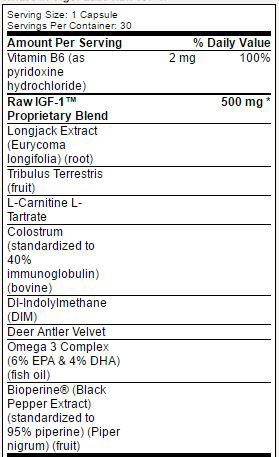 However, there is no evidence in any case studies that it raises the testosterone levels of healthy men.

This is a plant from Ayurveda, from where the roots and fruits are taken to be used as a libido enhancer. It has shown to be effective in increasing sexual well-being and erectile function, but it’s not known exactly why it works.

However, while it has shown to improve sexual well-being and erectile function, it hasn’t been proven to boost testosterone in healthy males.

This is produced in your body, but you can also consume L-Carnitine through food. It’s most commonly used for its ability to boost mental function (memory and reaction time).

However, in terms of T-levels, L-Carinitine hasn’t proven to be effective in raising your testosterone levels.

This is a form of milk that’s produced in the first few days after giving birth. Colostrum is produced by all mammals, including humans, and promotes growth in babies before they have a fully developed intestinal tract – as it can pass through the intestinal wall for absorption.

Also known as DIM, this is a molecule that’s commonly found in broccoli and is believed to be an aromatase inhibitor (prevent testosterone from converting into estrogen).

However, taking too much DIM can lead to an increase in testosterone to estrogen conversion – this is a problem, as it’s part of a proprietary blend, so you don’t know how much DIM you’re consuming.

It’s not worth the risk, especially as there aren’t any studies to actually prove that it improves testosterone production.

This is crushed antler that’s taken from animals that possess antlers (usually deer). It was originally used in traditional Chinese medicine and was believed to have positive effects on health and testosterone levels.

However, studies have shown that it’s ineffective in raising your testosterone.

This refers to two kinds of omega-3 fatty acids – eicosapentaenoic acid (EPA) and docosahexaenoic acid (DHA). It’s name comes from the fact that these omega-3 fats are most commonly found in fish.

It can boost your general well-being, but it doesn’t boost your testosterone levels. It’s also worrying because it’s part of a proprietary blend, and as it’s a very low-cost supplement to buy separately, it could be taking up most of the space in the blend – ultimately resulting in you wasting your money on an ineffective testosterone booster.

Also, Fish Oil can cause you side effects such as increased cholesterol if taken in large doses – as it’s part of the proprietary blend, you don’t know the amount of this ingredient is inside Raw IGF-1, so you’re at risk of suffering from this side effect.

This is the best ingredient in Raw IGF-1. Although everyone knows Black Pepper as seasoning for food, not many know about the benefits it can provide when supplemented alongside other nutrients. 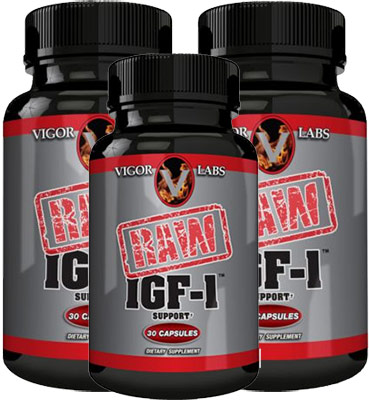 No ingredients in Raw IGF-1 have shown to be effective in raising your testosterone levels.

Here’s the possible side effects from taking Raw IGF-1:

Not What You’re Looking For? Click here for
– Our Top Rated Testosterone Boosters –

We strongly recommend that you save your money and look for other alternatives on your search for a quality testosterone booster.

The most effective ingredients in raising your testosterone include Vitamin D3 (technically a hormone, it’s proven to improve testosterone levels at a dosage of 3,332IU’s a day), D’Aspartic Acid (an amino acid regulator of testosterone synthesis that’s shown to increase T in healthy men) and Fenugreek (a herb that helps balance glucose levels, which helps to maintain T-levels).