TEST FREAK is a testosterone booster which its makers, PharmaFreak, state is “unique”. Whether that’s a good thing or not, we’re not sure.

The world of sports nutrition is full of marketing hype, but we’re less used to reading vague claims like those listed above – we’re not sure why the claims the supp is “unique” and that “NOTHING IS STRONGER!” are selling points.

After all, it’s never good to shovel large amounts of different nutrients into a supp and shout about how strong it is.

Instead, the best supplements contain optimal amounts of the right (proven) ingredients.

But as PharmaFreak is a respected name in the fitness industry, we thought we’d give TEST FREAK a shot…

PharmaFreak was founded in 2008 and it took less than a decade to gain worldwide recognition.

On the company’s website, you’ll see photos of co-founder Don Gauvreau with a white coat.

Next to this, you’ll find a claim that he’s known the world-over as “The Supplement Godfather” and that he’s “recognized as one of the best researchers and product formulators in the dietary supplement industry.”

TEST FREAK Ingredients and How They Work

As we look over the ingredients in TEST FREAK, the first thing we notice are the proprietary blends – these are usually enough to turn us off a supp right away.

Reminder: Proprietary blends are lists of ingredients that do not show the amount of each one. We don’t like them because they give you no way of assessing their potency before you buy. 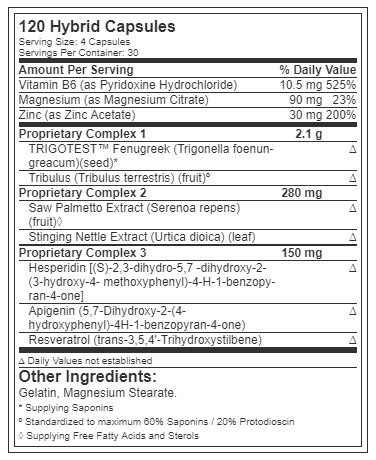 We’re always pleased to see Fenugreek in any T-booster. It not only boosts your testosterone, but also enhances your sex drive, strips fat and promotes the free flow of T.

But in the case of TEST FREAK, Fenugreek is part of a proprietary blend, so there’s no way of gauging how effective it is.

The herb has been used for centuries as a T-booster in traditional Chinese and Indian medicine.

In modern times, the use of Tribulus by Bulgarian weightlifters during the 1970s gave weight to the herb’s supposed ability to boost T. Some experts believe these athletes used this as a ruse to hide the widespread doping that occurred behind the Iron Curtain around this time.

Saw Palmetto is a mix of fatty acids which derive from the berries of the serenoa repens palm plant.

Native to North America, the plant is said to suppress prostate growth, enhance libido and ramp up testosterone.

However, the research on these claims highlights some contradictions…

While one study shows Saw Palmetto induced no change in hormone levels, another study saw an increase. However, the study which showed the increase in T also highlighted a fall in Dihydrotestosterone (DHT) – which is bad.

DHT is a more potent version of testosterone (responsible for ‘male traits’, such as the growth of muscles and body hair). For this reason, any T-booster you buy should increase DHT and not decrease it.

Along with Fenugreek, we were also pleased to see Stinging Nettle Extract in this supp. In fact, one of the products on our top three testosterone boosters uses it – and to great effect.

Nettle Extract’s job is to allow your body to absorb more of the other nutrients in the supp – it achieves this by binding to the sex hormone binding globulin (SHBG).

Mixed with the right ingredients, Nettle Extract can make more T available to your body – which is exactly what you want in a T-booster.

That said, its inclusion in a proprietary blend within the TEST FREAK formula makes it hard to see how effective it is.

Another issue is that some of the ingredients in this formula are proven to either have negative effects on your DHT (Saw Palmetto), or are ineffective for boosting T (e.g. Tribulus). As a result, Nettle Extract may be wasted here.

Hesperidin is a flavinoid found in citrus fruits. An NCBI study shows the compound may help prevent “lifestyle-related diseases” due to its ability to inhibit bone loss.

As it’s part of a proprietary blend, there’s no way of knowing how much Hesperidin is in TEST FREAK.

Unfortunately, this gives you no way to predict whether this supp boosts or reduces estrogen (a reduction is desirable). As a result, we can’t recommend taking it.

Apigenin is a compound found in Fenugreek seeds (also in TEST FREAK).

An NCBI study suggests the compound could help improve expression of the steroidogenic acute regulatory (StAR) protein. As a decrease in stAR protein has links to the age-related decline in T, Apigenin shows some promise.

But because further research is required to prove this for sure, we advise that you stick with Fenugreek (which contains Apigenin) – for now.

This natural bioflavonoid is found in red wine, grape juice, blueberries and peanuts. Its active compound is the enzyme resveratrol-synthase, which studies prove can protect your body against heart disease and high blood pressure, as well as decreasing the production of fat cells.

But does it increase testosterone?

Well, studies do imply it can inhibit the P450 enzyme, which regulates aromatization and decreases estrogen to allow T-levels to rise.

So what’s the problem?

None of the studies on the T-boosting effects of Resveratrol used humans as subjects. Until more evidence becomes available to show it’s safe and effective for humans, we advise drinking plenty of red wine and eating berries instead. 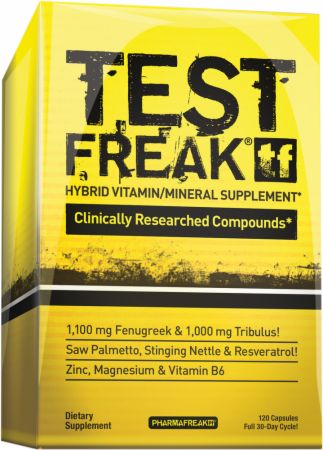 The ingredients in TEST FREAK appear to be safe. However, there is some evidence to suggest Tribulus can enlarge the prostate – so we advise caution.

Compared to many so-called T-boosters on the market, TEST FREAK isn’t bad.

It contains Fenugreek and Nettle Extract which can work together to boost testosterone. Meanwhile, Apigenin and Resveratrol show some promise for this purpose.

That said, we prefer our ingredients to be proven beyond doubt – and there isn’t enough research to show some of these ingredients work well in humans.

We were also dismayed to see Tribulus in yet another commercial T-booster. This is because the available research gives lie to the notion that the herb has any effect on T-levels.

PharmaFreak pitches TEST FREAK as a “unique”. But in reality, there’s nothing special about this testosterone booster.

With this in mind, we advise giving it a miss and spending your money on a T-booster packed full of safe, proven ingredients.