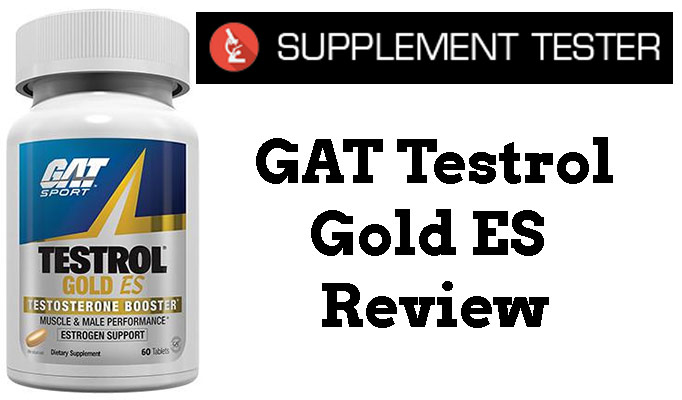 We’re only human, so shiny things catch our attention. So when we saw this bottle containing gold, we wanted to see whether GAT had created an effective testosterone booster supplement.

When we clicked on this products advertisement page on bodybuilding.com; we were faced with a picture of Sadik Hadzovic who’d been painted gold…we like the commitment from this athlete here.

In fact, it’s so entertaining that we’ll add a picture of shiny gold Sadik for you below… 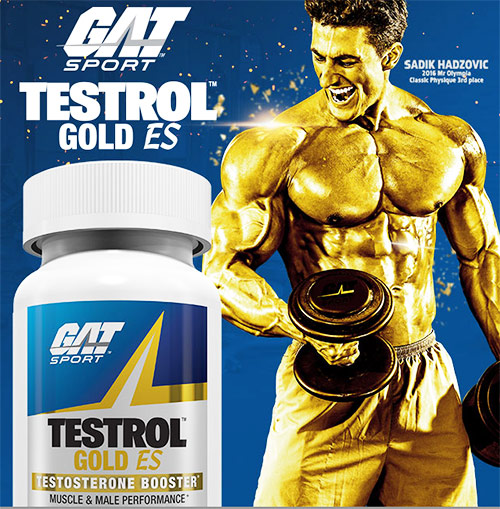 After looking at Sadik, let’s take a look at Testrol Gold Es and which ingredients are inside.

As we mentioned, GAT Sport sponsor some high level athletes -such as Sadik Hadzovic. We like that all of their products are made in cGMP and FDA approved facilities (this ensures that their supplements are consistent everytime).

However, apart from this, we didn’t learn much else about GAT Sport from their website.

We always say that the ingredient section of our reviews are the bit you can’t miss. In a nutshell, the nutrients are what makes a supplement effective or a waste of money.

Looking at Testrol Gold ES’ nutrient profile, we can see that this test booster contains too many ingredients (over 10). This wouldn’t be a problem if all the ingredients were dosed effectively.

However, as it usually costs companies too much to optimally dose over 10 nutrients – most are normally under-dosed (which is the exact problem with Testrol Gold Es.

If you look closely at the ingredient list, you’ll see that most ingredients aren’t dosed above 100mg per serving. 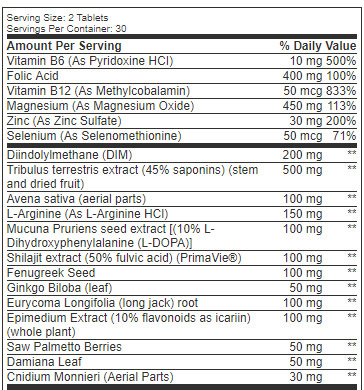 DIM is added into some testosterone boosters. as it’s believed to possess anti-estrogen properties (meaning it can stop your test from converting into estrogen).

However, this isn’t needed in GAT; no natural test booster is strong enough to raise you T levels by that much – only steroids can cause this side effect.

But that’s not the worst part; DIM can actually encourage your body to convert T into E when supplemented in high dosages. From what we can see, a ‘high dose’ is anything above 150mg for DIM – so you might be in danger from this side effect here.

While Tribulus is quite a well-known herb in the industry; you might be surprised to hear that it’s not actually proven to work in any studies.

Ultimately, this means that tribulus is an ineffective nutrient in Testrol Gold ES.

Not only that; tribulus has actually shown to cause an increase in weight on your prostate – which can lead to severe health issues.

As a result, we always recommend that you avoid this ingredient.

All you need to know about this ingredient; Avena sativa is basically the fancy name for oats (the same stuff you make porridge with).

As you can imagine, this might raise your energy levels slightly (due to being a carbohydrate). But it won’t do much else.

As this is a testosterone booster designed to raise T levels – oats simply aren’t needed in Testrol Gold ES.

We’re not sure why GAT Sport has added l-arginine into Testrol Gold ES.

Why? It’s not shown to have any effect on test levels. In fact, it’s usually added to pre workout supplements as it’s believed to raise your nitric oxide levels.

But it’s not actually proven to deliver this benefit either, due to having a poor absorption rate. The bottom line is that l-arginine is an ineffective ingredient in Testrol Gold ES.

Also known as ‘velvet bean’ due to it’s furry texture; this is the first ingredient so far, that’s shown to raise your test levels.

In fact, it can positively affect both your T and HGH levels – making it a great addition to Testrol Gold ES.

However, research shows that you need at least 300mg mucuna pruriens for it to work.

As Testrol Gold ES only contains 100mg, it’s not likely to do much here. Ultimately, this is a great example of why we don’t like products containing more than 10 nutrients.

This is an interesting nutrient; not much is actually known about shilajit extract.

What is it? It’s a mixture of minerals believed to improve your general health and raise your T levels. However, no study has actually proven whether it delivers this benefit or not.

But that’s not the worst part; shilajit has been banned in Canada due to containing heavy metals.

As a result shilajit is another ingredient we avoid.

Now, this is a great addition to Testrol Gold ES by GAT. In a nutshell, fenugreek seed extract is known for raising your libido and testosterone levels – and studies have shown that it works.

No problem here, so good work by GAT.

This is known for being a herb that’s able to improve your cognition. However, studies suggest that it’s not reliable.

As gingko biloba doesn’t have any effect on your T levels – we consider this to be an ineffective nutrient here.

Otherwise known as Tongkat Ali, this herb has been used in traditional medicine for decades. It’s shown to improve your erections, but it’s not reliable at raising your testosterone levels.

As a result, this isn’t a key ingredient, but no-one will complain about having stronger erections.

These are the beans of the saw palmetto tree, which are most commonly found in Florida (USA). It’s believed to be able to suppress the growth of your prostate (which is most likely the reason why GAT has included this ingredient alongside tribulus terrestris).

But here’s the worrying thing; saw palmetto beans hasn’t actually shown to deliver this benefit in any human study (so you’re still likely to suffer from tribulus’ side effect).

This is traditionally used as an aphrodisiac (to improve your libido). But not many studies actually suggest that it works.

GAT have put alot of effort into making Testrol Gold ES effective at improving your erections. This is another ‘pro-erectile’ herb that’s been used in traditional medicine.

Although no evidence in western civilisation exists to show this is effective; it’s thought to possess similar effects to viagra in east asia. 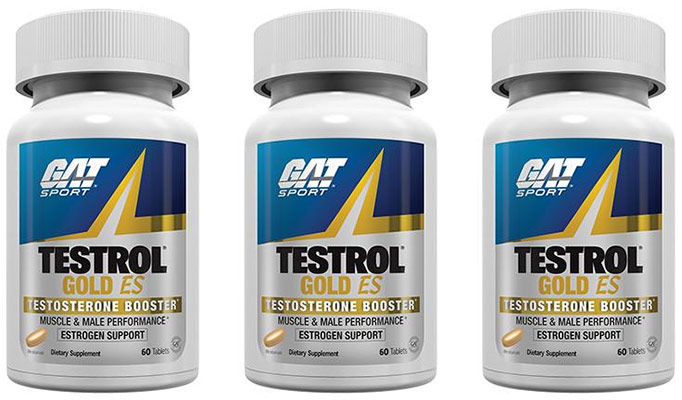 We mentioned that Testrol Gold Es can cause side effects. Well, we’ll let you know which potential side effects these are below.

While the advertisements are shiny gold, unfortunately Testrol Gold ES won’t be standing on our podium – it’s not good enough to beat any of our top three test booster supplements on the market.

We were expecting better things from a company as big as GAT – especially after they painted Sadik Hadzovic in gold paint to advertise this product.