We like that Vigor Labs is always advertised by the man who founded the company – a quite lean man with a widows peak. We wonder when this company will begin to use real fitness models to market their products…

To be fair, this is a ‘budget’ supplement costing only $17.33 – so you can’t be expecting the best product on the market. But what we’ll look at, is whether Wrecking Balls is worth its value – by examining it’s nutrient profile.

We realize that Vigor Labs sell budget supplements, but their website doesn’t have to look as ‘cheap’ as it does. In fact, there’s no information about this company at all – not good for someone who’s looking to learn more about it, like us…

Also, we thought the name of this product was a joke at first, but then we realized it was real on bodybuilding.com. As a result, we couldn’t wait to look at the nutrient profile of this testosterone booster – and see whether it’s able to really wreck your balls.

We’re quite overwhelmed after looking at the ingredient list – our balls are wrecked from the fact that this test booster contains 13 ingredients (which is a massive number).

But that’s not the worst part; every nutrient inside Wrecking Balls is part of a proprietary blend, meaning no-one knows the dosages of each nutrient inside (which can put you at risk from side effects). 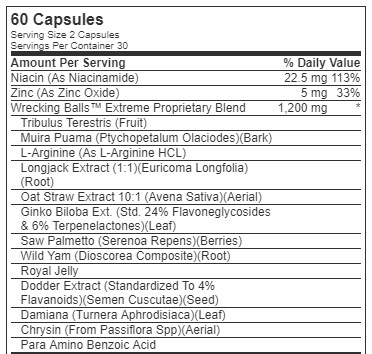 The first ingredient on Wrecking Balls’ nutrient profile. But it isn’t a good one…

Basically, tribulus has shown to increase your prostate weight – which can be quite dangerous to your health (potentially leading to serious health issues).

But it’s also shown to be ineffective in numerous studies too. For this reason, we can’t recommend that you supplement tribulus terrestris.

The worst thing is that this nutrient is inside a proprietary blend – so if there’s a large dosage inside, you’ll be at increased risk from side effects. The point is, you’ll never know as Vigor Labs has hidden it inside a blend.

Traditionally used as an aphrodisiac, this is a ‘nerve tonic’ utilized in Brazil. That makes no sense to most of you, so in simple terms; muira puama is thought to improve your cognition and sexual health.

However, there hasn’t been any human studies to suggest that it’s actually effective or not. As a result, this is an unreliable nutrient.

We’re not sure why Vigor Labs has included L-Arginine in their testosterone booster. In fact, it’s not even a key ingredient in a pre-workout either – because it’s ineffective due to its poor absorption rate.

This herb has been used in ayurvedic medicine for a very long time – as it’s believed to improve your sex drive and testosterone levels.

While it’s shown to be ineffective at raising your test levels – Longjack can raise your libido.

As a result, it’s not a useless ingredient, but it’s not a key addition to a test booster either (there are many herbs that raise your T and libido).

We never understand why companies try and make this ingredient sound better. It’s basically the same oats you use to make porridge – tasty, and a good source of carbohydrate – but it won’t improve your test levels.

We have to point out that Vigor Labs has mispelled this ingredient – it’s actually ‘Ginkgo’, not ginko…

Anyway, now that you’ve graduated from the SupplementTester literary class; ginkgo biloba extract hasn’t shown to do much at all.

In a nutshell – if you’re looking for raise your T levels, the ginkgo biloba won’t work for you here.

This extract is taken from the tree called saw palmetto. Interesting fact? We thought so anyway…

But here’s what you need to know – saw palmetto extract hasn’t proven to boost your testosterone, but it can cause side effects.

Also known as dioscorea villosa, this is a vine that’s found in north america – it’s been used in traditional Russian medicine, but it hasn’t shown to boost your test levels in any study.

Basically, there’s a myth that this vine magically possesses human hormones. But without any scientific evidence backing this up, it simply remains a myth.

This is the secretion used to feed adult bee queens. However, it’s important to know that the FDA have stated that royal jelly doesn’t provide any benefits – and even ‘actively discouraged the sale’ of this nutrient.

As a result, we also recommend that you stay away from royal jelly.

Not much is known about this ingredient at all. This also means there hasn’t been any studies to prove whether it actually works or not.

As a result, dodder extract is an unreliable ingredient.

Again, not much is known about damiana either – apart from it’s used as an ingredient in traditional Mexican liqueur.

Anyway, all you need to know is that damiana hasn’t shown to affect testosterone levels either.

This is an interesting nutrient – if you feel like injecting your testicals with this, then it might work (which could be why Vigor Labs has named this product ‘Wrecking Balls’).

However, it’s proven to be ineffective when orally supplemented. As a result, it’s not likely to work here.

Simply known as PABA, this can be used to protect your skin from ultraviolet light (preventing sunburn).

However, it’s not shown to be very beneficial when consumed orally. As a result, this is another unreliable ingredient inside Wrecking Balls. 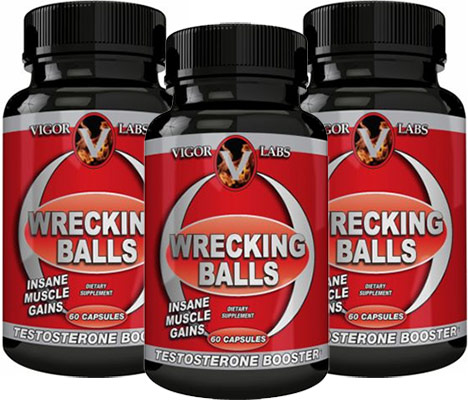 We mentioned throughout the ingredients section above, that there’s risks of side effects from numerous nutrients here – including tribulus and saw palmetto extract.

We’ll praise this product for one thing – the low price. However, it’s not even a good option for those looking for a bargain.

In a nutshell, it’s more likely to cause side effects than actually raise your testosterone levels – making it an ineffective test booster supplement.

Ultimately, you get what you pay for. We recommend saving up a bit extra after avoiding junk food, and getting a better, more effective supplement that’ll actually work.