Xellerate Test Boost is currently the number-one best-seller on Amazon UK. This is quite a feat considering we’d never heard of the company or the product until we stumbled across them recently.

Out of almost every test-boost supplement review we’ve done, this one is unusual in that we can’t tell you anything about its makers, Xellerate Nutrition.

The brand doesn’t appear to have a website and only sells via Amazon UK. It sells five products, including fish oil, BCAA, and a fat burner.

As the top seller on Amazon,  Test Boost boasts some glowing reviews. But according to one or two online sources, at least one Xellerate product is subject to ‘unnatural reviews’.

As we start this Xellerate Test Boost review, the first thing we notice is that the product doesn’t use any proprietary blends – which is great.

The T-booster also contains some powerful ingredients, as well as one or two we’d rather not see in this type of a product. 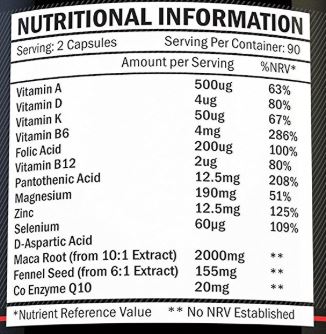 Vitamin D is one of our favorite T-boosting ingredients – at least in the form of D3.

There are two main forms of Vitamin D: D2 (aka Ergocalciferol) and D3 (Cholecalciferol). Many don’t know the difference – maybe because both forms protect your bones and prevent rickets.

So while they largely do many of the same things, the main difference is that D3 has a higher absorption and is a far better testosterone booster.

The best test boosters tend to show the form of Vitamin D they use. But as Test Boost doesn’t do so, it’s hard not assume its makers are trying to exploit the public’s ignorance of the different forms of Vitamin D.

Either that, or they don’t know what they’re doing – which may be even worse.

Magnesium is an essential mineral that not only boosts free testosterone; it also lowers blood sugar to allow your body to produce more of the male hormone. It boosts T by inhibiting the sex hormone binding globulin (SHBG).

The mineral even supports your muscles against fatigue, cramps, and soreness – which is great news if you’re looking to boost your endurance in the weight room.

For boosting testosterone, the optimal range of Magnesium is 100-200mg, so it’s nice to see Test Boost holds 190mg of the mineral.

It boosts T by helping your brain produce more of the Luteinizing Hormone (LH), which is one of the hormones directly responsible for testosterone production.

For supplements with no other sources of Zinc, we recommend doses of up to 30mg. But in the case of supplements that contain another rich source of Zinc (e,g. Oyster Extract), we advise you choose a supp with an additional 5-7.5mg of the mineral.

Selenium is a mineral which the human body needs to synthesize testosterone; a Selenium-rich diet is also shown to improve sperm quality.

Despite this, we don’t think you need to take more Selenium in a supp. This is because it’s a trace mineral – meaning you only need a small amount to help build testosterone.

As an example, you can get your fill of Selenium from eating just six brazil nuts. As a result, it’s pretty easy to get what you need naturally in your diet.

D-Aspartic Acid (D-AA) is one the most important ingredients to find in a T-booster. The amino acid is relatively new on the scene, but its reputation as an awesome testosterone booster continues to grow.

D-AA induces a release of the Luteinizing Hormone ( a key T precursor) in the central-brain region. The results in not only in an increase in T, but also enhanced fertility.

The amino also boosts growth-hormone production, which in turn results in larger muscles and more strength. For daily use, 1600-2300mg of D-AA is ideal for boosting T.

But strangely, the Xellerate Test Boost label doesn’t state the amount of D-AA it contains. As a result, there’s no way to tell whether it holds enough to do the job.

Native to Peru, Maca Root is the root of a plant that looks like a turnip, but is actually a member of the broccoli family.

While men using Maca might experience enhanced libido and an increase in sperm count, Maca has no effect on the hormones and DOES NOT boost testosterone in males or females of any age or status.

Fennel Seed is marketed as a T-booster and male enhancement supplement. Ancient civilizations in Greece, India, China0 and Egypt used the seed to treat a range of ailments. However, there is no evidence Fennel affects testosterone in any way.

Coenzyme Q10 is a molecule that has several health benefits. These include protecting the heart against disease, increased blood flow and a reduction of fatigue.

But as a T-booster, Q10 is useless. In fact, research shows the molecule has no effect on the Luteinzing Hormone, while one study even shows a link between Q10 and DECREASED testosterone. 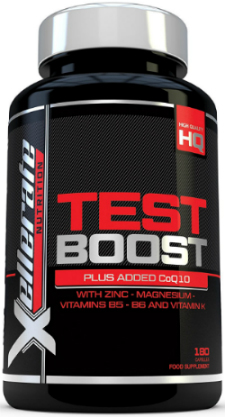 The ingredients in Xellerate Test Boost are safe to take.

At first glance, Xellerate Test Boost looks like an awesome test booster, especially for £16.97! But the truth is a little more complicated…

While we’re always pleased to see Vitamin D in any test booster, it’s not clear which form it uses. This is an important distinction, because in T-boosting terms, D3 has a higher absorption rate and is much more effective for this purpose.

It’s also awesome to see the likes of Magnesium, Zinc, and especially D-AA in Test Boost. However, it doesn’t use enough Zinc, while the lack of dose info for D-AA means we have no idea whether Test Boosts contains enough or not.

Despite the promising start to this Test Boost review, this supplement contains a few ingredients which let it down.

And while it may be a best-seller on a popular shopping platform, it’s surely far from being “Best Testosterone Booster 2018” as we’ve seen it described elsewhere.

For this reason, we advise looking elsewhere.