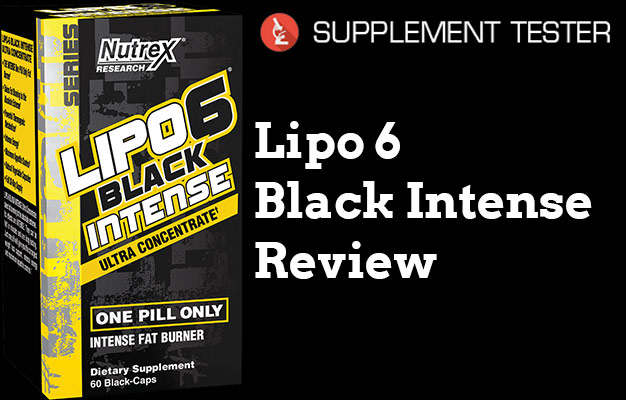 This fat burner is Nutrex’s addition to their Lipo 6 series, called ‘Black Intense’. It caught our attention due to it’s bright container, so we’re hoping it’ll be a fat burner we’re happy with.

This fat burner is advertised to deliver the right benefits, so we’re looking forward to seeing whether its ingredients can back its claims.

Nutrex is a well-known sports nutrition company that was founded in 2002. We didn’t learn too much about their company on their ‘about us’ section apart from this.

But what we do know about are the ingredients inside Lipo 6 Black Intense. So lets check them out…

The first thing we noticed the serving size of Lipo 6 Black Intense – 1 capsule per day.

We’re surprised that Nutrex actually market this as a benefit ‘one pill only’; it’s more beneficial to consume 3-4 capsules spread throughout your day, so your body stays fuelled with nutrients needed to boost fat loss.

Not only that, Lipo 6 Black Intense contains 1 big proprietary blend that all of it’s ingredients are hidden in – this means no-one knows the dosages of each nutrient, or more importantly, whether this fat burner will be effective.

However, we’ll do what we can and examine the ingredients for you in this section.

This is a cognitive booster that’s shown to improve your memory and focus – but these aren’t benefits that you’d buy a fat burner for.

However, L-Tyrosine can play a key role in Nootropic supplements.

This is simply a mixture of Caffeine and Citric Acid; it’s thought to be more beneficial than normal Caffeine, but no studies have proven this to be the case.

We always stick to Caffeine Anhydrous – which is the most reliable and safest form available. When it comes to stimulants, safety comes first, so we’re not convinced by Caffeine Citrate.

But that’s not the worst part – Caffeine Citrate is part of a proprietary blend, so no-one knows the exact dosage inside. Ultimately, this puts you at risk of suffering from jitters and energy crashes.

If you haven’t heard of Theacrine before, it’s basically a stimulant that’s thought to offer the same benefits as Caffeine. However, no studies have shown that it’s as safe or reliable.

As a result, it’s an unreliable ingredient in Lipo 6 Black Intense. Not only that, it’s inside a proprietary blend – which puts you at more risk of suffering from side effects.

As we’ve mentioned, this is the best stimulant you can find in fat burner supplements. However, Lipo 6 Black Intense contains a total of 3 stimulants, which are all in a proprietary blend; this seriously puts you at risk from suffering from jittery feelings (or even worse if it contains over 400mg per serving of stimulants).

As a result, we only recommend you to try fat burners that contain under 100mg Caffeine per capsule, and an overall Caffeine serving of 300mg.

This is known by a couple of names such as Synephrine and Bitter Orange, but 1 thing is for sure – it’s potentially very harmful.

In fact, Synephrine has been banned in numerous countries for this very reason. As a result, we always recommend you to avoid this ingredient, and it’s on our ‘blacklist‘ of nutrients to avoid.

The worst thing is, Synephrine is part of a proprietary blend – so there could be large dosage of this nutrient inside Lipo 6 Black Intense (which would increase your risk of side effects, which we’ll expand on later in this review).

Yohimbine is another potentially harmful fat burning ingredient that’s been banned in numerous countries as a result. It’s also on our blacklist to avoid.

Check the side effects section to see what damage it can cause.

Not a good finish by Nutrex here. They’ve ended with a ‘tripod’ of the worst ingredients you can find in fat burner supplements.

We can understand why this company has added Synephrine, Yohimbine and Rauwolscine – they’ve all shown to promote fat loss.

But they’ve also shown to cause harmful side effects – and as there are ingredients that are effective without causing side effects – we recommend choosing those instead. 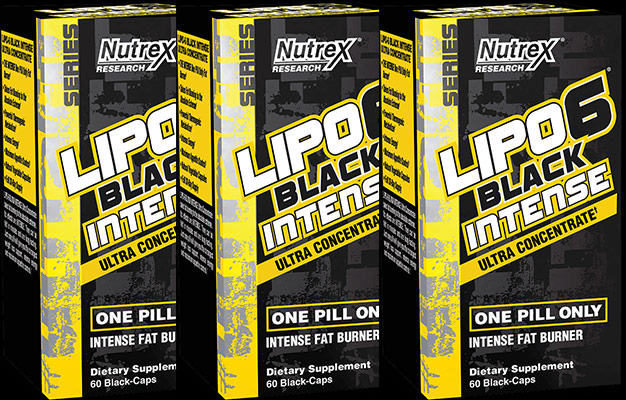 As we mentioned, there are many things in Lipo 6 Black Intense that can cause side effects – most notably the overload of stimulants inside a proprietary blend.

This can lead to jittery feelings and energy crashes, which isn’t a good thing. In fact, most pre-workout supplements contain less Caffeine than Lipo 6 Black Intense (which should put things into perspective).

But that’s not even the worst thing about this fat burner. Lipo 6 Black Intense contains 3 ingredients that commonly cause side effects that have been banned in numerous countries as a result – Synephrine, Yohimbine and Rauwolscine.

We recommend that you avoid any fat burner containing these ingredients – it’s simply not worth suffering from side effects for.

Straight away after looking at Lipo 6 Black Intense’s nutrient profile, we weren’t impressed. But after examining the ingredients inside, we hope you can see exactly why.

The main 2 negative points that about Lipo 6 Black Intense, are the fact all its ingredients are part of a big proprietary blend (meaning you don’t know the exact dosage of ingredients inside, increasing your risk of side effects).

Not only that, Lipo 6 Black Intense contains an overload of stimulants (Caffeine Citrate, Theacrine and Caffeine Anhydrous). Having this many stimulants is unecessary and only increases your risk of suffering from jitters.

As a result, we recommend you to check out the highest rated fat burngers instead.