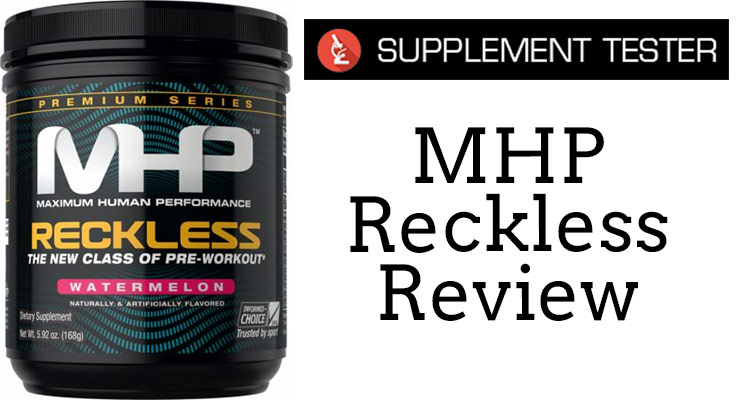 MHP Reckless is marketed as ‘The New Class of Pre Workout’ – a big claim, which we’ll be exposing in this review.

This product is claimed to promote:

These are all great benefits for a pre workout to offer, so let’s take a look whether the ingredients can back up these claims. Read on to find out.

MHP (Maximum Human Performance) are a company that market numerous supplements, such as weight gainer protein, fat burners and pre workouts like Reckless.

However, MHP’s website doesn’t provide any information about when they were founded.

MHP Reckless probably contains the most amount of ingredients we’ve seen in a pre workout supplement. You only need 5-8 key ingredients to get the most benefits from these products, so having over 20 ingredients is unnecessary.

We’ll only take you through the most important ingredients – to save this review turning into a bedtime story.

Caffeine is the best stimulant on the market, but it can cause problems when dosed too highly – which seems to be the issue with MHP Reckless.

Here’s the ingredients that contain Caffeine in this pre workout:

As you can see, the total caffeine content adds up to a massive 390mg Caffeine. This is seriously big dosage of Caffeine to consume in one serving, and will be very likely to cause jitters and energy crashes.

We definitely prefer quality over quantity, and this shows you exactly why.

A herb used in traditional Indian medicine, it’s shown to have a positive effect your strength and stress levels. The only problem is that Ashwagandha’s not shown to raise testosterone levels.

This is a patented product extracted from the whole fruit of the coffee plant. It’s believed to improve focus, but no studies have proven that it works.

L-Theanine forms a ‘smart-caffeine’ when consumed with Caffeine. However, the problem is that there’s an overload of caffeine in MHP Reckless, meaning L-Theanine won’t be able to help you avoid side effects.

However, in other pre workouts, L-Theanine is able to enhance the benefits of Caffeine in smaller dosages (which decreases your risk of suffering from jitters or energy crashes).

This is a stimulant, similar to caffeine, that’s believed to be more beneficial – in a nutshell, humans build less tolerance to Theacrine, meaning it’ll be more powerful in long-term usage.

But the last thing MHP Reckless needs is another stimulant. This only adds to the already massive 390mg Caffeine dosage in here – making this pre workout almost dangerous (especially to those sensitive to stimulants).

We always have mixed feelings about Beta-Alanine, as it’s shown to be effective at improving your endurance levels in the gym (which is why it’s seen on many pre workouts’ ingredient list.

However, Beta-Alanine also causes paresthesia (tingling on the skin of your face, chest, hands, fingertips and toes).

Finally, an ingredient worth talking about in MHP Reckless. Basically, Creatine is the daddy of ingredients that can improve strength and endurance – it’s been used by bodybuilders since the 1990’s and everyone knows that it works.

However, a 750mg dosage is a small amount for Creatine. If you’re supplementing Creatine Monohydrate separately, then this dosage will be great, but if not, then it won’t have much effect here.

Creatine Hydrochloride is the younger brother of Monohydrate. It’s much newer and hasn’t been researched much in studies (as of 2017).

However, many believe that Creatine Hydrochloride is more water soluble than Monohydrate (meaning it’ll take less water to dissolve it). We always stick with Creatine Monohydrate as it’s proven to work, but maybe in the future Hydrochloride will take over.

MHP really love adding unnecessary ingredients into Reckless pre workout. It already contains 2 forms of Creatine, so there’s really no need for a third, but here it is.

Creatine-AAB’s not even proven to work, making it unreliable. Again, we’ll repeat that Monohydrate is the best form that’s proven to work, so MHP should’ve simply increased the dosage of that and kept the other two forms of Creatine out.

This is marketed as a mineral based performance ingredient. In a nutshell, it’s designed to boost your ATP levels (which is what Creatine Monohydrate does), so this isn’t really needed in MHP Reckless, as it contains 3 forms of Creatine.

Another unneccesary ingredient to add to the pile in Reckless pre workout.

If this was dosed optimally (3,000mg), then it would’ve been one of the best ingredients in MHP Reckless. L-Citrulline’s proven to raise your nitric oxide levels, which has a direct impact on blood flow (which results in enhanced muscle pumps in the gym).

There’s one tiny criticism though – personally, we prefer Citrulline Malate (Citrulline bound to Malic Acid), as this offers the added benefit of increased strength too. If you’re looking for this ingredient, the optimal dosage for it is 6,000mg.

Whenever a supplements company adds this into their pre workout, we know they haven’t done their research. Basically, L-Norvaline is believed to remove the threshold for nitric oxide levels (your body naturally limits the amount of nitric oxide you produce).

If it worked, then this ingredient would enhance muscle pumps. However, no study has proven it works.

As a result, we prefer L-Citrulline (or Citrulline Malate), as it’s shown to improve your muscle pumps in the gym.

Don’t worry, we won’t go through all the ingredients in this huge blend – instead, we’ll give you a quick summary.

In a nutshell, Spectra Blend contains fat burning ingredients such as Green Coffee Bean and Green Tea Extract; these are actually 2 of our favorite ingredients in a fat burner supplement, but remember this is a pre workout.

If you’re Usain Bolt, you’re not going to compete with Michael Phelps in the pool – you won’t even get in the pool. This is why MHP should’ve left fat burning ingredients out of this pre workout. 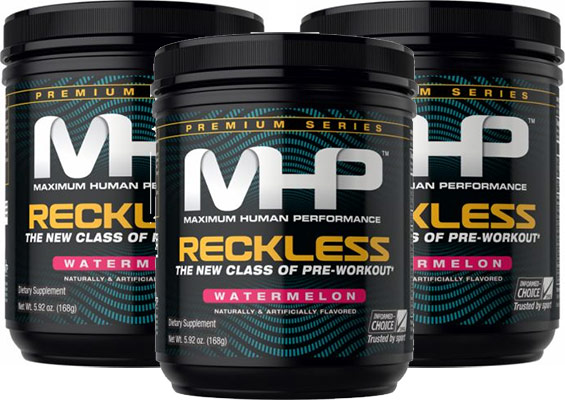 Not what you’re looking for? Check Out
– Our Top Three Pre Workouts Page –

We’re very worried about the overall quantity of Caffeine in MHP Reckless (390mg). You’re recommended to stay below 400mg Caffeine for your whole day, so having this in one serving can actually be dangerous.

Personally, we stay below 200mg per serving with pre workouts (we’ve found that we experience jitters when consuming above this dosage).

As a result, take MHP Reckless at your own risk. Take a look at the potential side effects:

MHP Reckless has one of the biggest ingredient lists we’ve ever seen. There’s simply no need for a supplement to contain over 20 ingredients, and this is a great example of why quality over quantity is more important.

We believe that MHP Reckless is actually a dangerous pre workout, as it contains a massive 390mg of Caffeine per serving. If you’re sensitive to Caffeine like us, you’ll want to stay the hell away from this pre workout.

As we’ve mentioned, we prefer pre workouts with Caffeine dosages below 200mg per serving – you’ll still experience it’s benefits with this dosage, but stay clear of potentially side effects like jitters.

Bottom Line: We recommend that you avoid this pre workout, and others containing high amounts of Caffeine.