PreSeries Lean is one of three pre-workouts in the Transparent Labs range. We’ve reviewed the PreSeries Bulk version before and found that product fell short.

Will the PreSeries Lean Pre-Workout fare any better?

This pre-workout claims to:

Hold on! Is this a pre-workout or a fat burner? In our experience, products that mix pre-workout and fat-burning ingredients tend not to be great for either purpose. But we might be wrong…

As you’d expect from a brand named Transparent Labs, the company likes to present itself as honest. It promises to do away with “pseudoscience”, “misleading research”, and “outrageous claims.”

The company website rightly refers to what it calls “low-quality products” and “deceitful marketing” in the nutrition industry.

It also talks about the need for “change” in the industry and appears to present itself as the answer to the industry’s problems.

PreSeries Lean is a strange mix of 21 ingredients, some of which we’re used to seeing in pre-workouts, along with others we see in fat burners – there’s even a few T-boosting staples here! 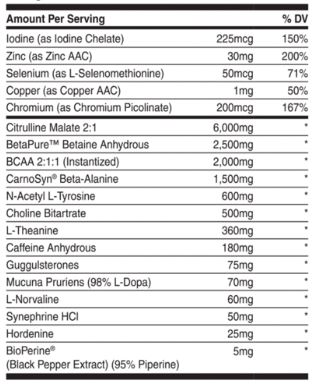 We can’t fault the use of Citrulline Malate here – this is one of our two favorite pre-workout ingredients (the other is Creatine).

Citrulline Malate is a blend of L-Citrulline and Malic Acid.

Derived from watermelons, L-Citrulline is a precursor to Arginine, which increases the level of nitric oxide in your blood. This widens your blood vessels to send more oxygen and other vital nutrients to your muscles.

This helps achieve the muscle pumps many lifters love. The result? Your muscles grow larger, quicker.

BetaPure™ is a patented form of Betaine.

An active metabolite of Choline, Betaine is on our list of ingredients that can cause side effects – which is why we advise avoiding it.

Betaine may cause your breath and body odor to smell like rotten fish. So even if it does boost performance, who cares if no-one wants to go near you because you smell so bad?

In truth, the possible (unproven) benefits aren’t worth the risk.

But does Betaine work?

While widely used to enhance performance, there’s not enough proof that it does this. It does not appear to reduce fatigue, increase power output or have any effect on muscle soreness.

And while one study notes Betaine might induce an increase in training volume, there isn’t enough follow-up research to verify this.

BCAA are important for muscular health, but we’re not sure why Transparent Labs includes these amino acids in this supp.

Why? Because if you’re serious about lifting, you’ll no doubt also be using protein powder. As whey protein already contains plenty of BCAA, they may be wasted in this pre-workout.

Despite this, Beta-Alanine is a pre-workout ingredient to avoid. This is because it can cause paresthesia – abnormal prickling sensations that many liken to “pins and needles”, or the feeling of a “limb falling asleep.”

N-Acetyl L-Tyrosine (NALT) is best-known as a nootropic – and research does suggest it improves mood and cognitive function in military personnel under acute stress.

As mood can affect exercise, it could stand to reason this ingredient could boost your workout. However, this is all conjecture. In truth, NALT has no direct effect on sports performance.

Choline is a popular, but pointless pre-workout ingredient. While it’s supposed to improve focus and reaction time, there’s no evidence to support this claim.

Research also shows Choline does not affect running capacity, training volume, or even the rate of perceived exertion.

And that isn’t all…

Along with Betaine, Choline can cause fishy breath and body odor. With this in mind, it’s worrying PreSeries Lean Pre-Workout contains both these ingredients.

L-Theanine is an amino acid derived from Green Tea. It is known for its relaxing effects. And it works with Caffeine to give you all the increased strength, focus, reaction time and motivation Caffeine provides, but without the crash.

While some are wary of Caffeine, it’s an awesome stimulant – at the right dose.

Caffeine keeps users alert by antagonizing the adenosine receptors to prevent the build-up of adenosine (which makes you feel sleepy).

The optimal range for Caffeine is 150-200mg, so it’s good to see this Transparent pre-workout uses 180mg.

Guggulsterones are the active ingredients of the Guggul plant. One study suggests mixing Guggulsterones with L-Tyrosine, Hydroxycitric Acid and Phosphate may induce weight loss, which is probably why you’ll find it in this lean pre-workout.

However, further research failed to show any link between Guggulsterones and weight loss.

We have no idea why Mucuna Pruriens is used in this lean pre-workout; it has no use as a fat burner or pre-workout.

Transparent Labs also includes it in its Bulk and Lean Pre-Workouts – apart from this, we’ve only seen Mucuna Pruriens in testosterone boosters.

While increased T can boost energy, there are much better ingredients for this purpose.

L-Norvaline is an amino acid which is supposed to boost your body’s ability to produce nitric oxide for stronger muscle pumps.

But besides a lot of hype in the lifting community, there seems to be zero medical evidence of L-Norvaline’s use for this purpose.

With this in mind, it’s disappointing that a company claiming to be against pseudoscience uses this unproven ingredient in this pre-workout.

An ingredient like Beetroot is better studied ingredient that works great with Citrulline Malate for vasodilation.

This is hands-down the worst pre-workout ingredient on the market. Synephrine is banned for sale in the UK, Australia and other countries due to concerns about potentially-lethal side effects.

Also known as Bitter Orange and Orange Peel, Synephrine also has a similar structure to Ephedrine – which is banned in the US.

Possible side effects of Synephrine

This ingredient has also been known to cause heart attacks, fast (and irregular) heartbeat, and high blood pressure. It may also raise the risk of stroke, headaches and loss of consciousness.

While research suggests it might have mild fat-burning effects and reduce appetite, the proof of this is limited at best. We recommend you steer clear of this ingredient.

It really is disappointing to find Synephrine in this – and a few other – Transparent Labs products.

In particular, you should avoid taking Synephrine in combination with Caffeine (or other stimulants) – especially if you suffer from high blood pressure.

Hordenine has a similar structure to Synephrine. While the molecule is understudied, there are concerns Hordenine may also cause high blood pressure and rapid heart rate.

The possible side effects and its unproven nature make Hordenine another ingredient on this list to avoid – especially in one that altready contains Synephrine and Caffeine.

BioPerine is a patented form of Piperine (aka Black Pepper Extract). As a mild thermogenic, Piperine can help reduce weight gain.

Yet its main purpose is to allow the body to absorb other ingredients faster. But as this pre-workout contains a few ingredients that are either  useless or potentially unsafe, the use of Black Pepper may be misplaced. 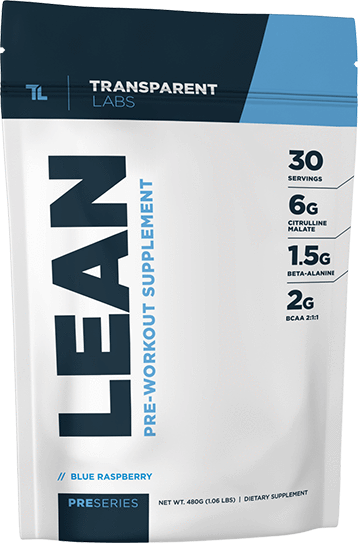 Most of the ingredients in PreSeries Lean Pre-Workout are safe.

However, Synephrine is banned in the UK and a few other countries due to its links with a range of conditions. These include:

The mix of Synephrine and Caffeine may increase the risk of the symptoms above.

Betaine and Choline may also cause fishy body odor and breath.

The word ‘lean’ in the name suggests it’s designed for both pre-workouts and burning fat. But it doesn’t appear too be effective for either purpose.

PreSeries Lean Pre-Workout not all bad. You’ll find Citrulline Malate and the smart L-Theanine/Caffeine combo in the best pre-workouts on the market.

But the good stuff ends there…

First, PreSeries Lean Pre-Workout contains Synephrine (aka Bitter Orange, and Orange Peel). This ingredient has a similar structure to Ephedrine and is actually banned in the UK, Australia and elsewhere due to its links with a range of heart conditions and other health issues.

Second, this product doesn’t know what it is. It contains T-boosting ingredients that we’ve rarely seen in pre-workouts or fat burners (Mucuna Pruriens) and a bunch of unproven ingredients (Guggulsterones, L-Norvaline, and Hordenine).

In truth, there doesn’t seem to be any published research on L-Norvaline, which appears to belie Transparent Labs’ claim not to use pseudoscience.

And third, we advise avoiding Choline and Betaine because they may make your body odor and breath smell like rotten fish.

While not the worst supplement we’ve tried, it sure ain’t the best lean pre-workout either. It contains too many unproven or potentially unsafe ingredients to be worth your money.