We came across a pre-workout supplement fresh for 2017 – Sidewalk Kraka by Iron Addicts. Here at SupplementTester, we always get excited by new arrivals, so we were eager to see how good Sidewalk Kraka is.

We wasted no time in giving it a test-run, and we’ve provided everything you need to know in this review.

These are all great benefits for a pre workout to offer – why else would you buy one? See whether Sidewalk Kraka contains the right ingredients to back-up it’s claims. 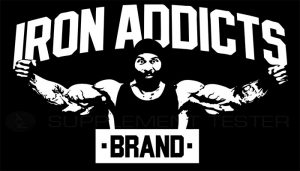 Founded by CT Fletcher (a Youtube fitness star), Iron Addicts is a USA-based supplements company. They offer other products, such as a protein powder called ‘I Command You To Grow’ and a fat burner called ‘Will Powder’.

As you can see, CT Fletchers given his identity to his company – but let’s see whether this pre-workout will be as successful as his videos are.

Almost immediately after looking at Sidewalk Kraka’s ingredient list, we can see this isn’t going to be the best product of the year. The first problems are that the Caffeine dosage per serving is high for a pre-workout, Beta-Alanine causes paresthesia, and Rauwolfia also causes side effects.

We’ll analyze the ingredients in Sidewalk Kraka for you, just to clear everything up. See for yourself: 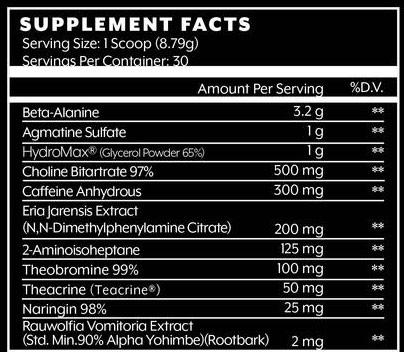 This is one of the ingredients we avoid in pre-workouts. Personally, we don’t enjoy experiencing paresthesia (which is a tingling on your skin, around your face, chest, hands, fingertips and toes).

We find this side effect off-putting when trying to focus on our workouts – and many others have commented on SupplementTester about how they don’t enjoy paresthesia either.

Agmatine is extracted from L-Arginine and has shown promise in relieving pain and treating drug addiction. However, we’re guessing none of you reading this review are recovering drug addicts…more power to you if you are though.

Anyway, here’s the important info: L-Arginine is ineffective when orally supplemented (therefore it’s useless in pre-workouts). As a result, anything extracted from L-Arginine is also ineffective (such as Agmatine and AAKG).

The bottom line is, this shows us a lack of research by Iron Addicts.

We’d like to point out that if you google ‘HydroMax’, the first thing that comes up is a penis pump…clearly this ingredient isn’t the best thing on the market with this name.

Anyway, we agree that this form of HydroMax isn’t as good as the bathmate – we haven’t tried the penis pump, but the active ingredient in this patented ingredient is Glycerol (which has shown to be ineffective in numerous studies).

The only thing you’ll get from consuming Choline is a fishy breath – we’re actually being serious.

Choline’s shown to be ineffective in offering any useful benefits to improve your workout; but it’s commonly reported to cause this unusual side effect.

Finally a good ingredient, but Iron Addicts have managed to slip up again.

Here’s why: caffeine can improve your strength, endurance, focus and energy in optimal dosages (between 150-200mg in pre-workouts). But consume too much, and these benefits are taken too far, resulting in energy crashes and jitters.

You’ll know exactly what we’re talking about if you’ve had too much coffee in a short period of time. Unfortanately, Iron Addicts have dosed caffeine too highly at 300mg per serving – meaning you’re at risk of experience side effects.

This is extracted from the plant and is believed to offer a compound similar to DMAA (as DMAA is currently banned by the FDA in 2017, Eria Jarensis Extract is seen as the legal alternative).

But you have to remember that DMAA wasn’t banned for no reason – it caused numerous side effects. Here’s the problem with Eria Jarensis Extract: it’s not been researched much, so no-one knows how safe it is, or how effective it is.

As a result, we recommend avoiding Eria Jarensis Extract.

Also known as DMHA, this is another ingredient thought to be a perfect replacement for the banned DMAA. What is it?

As of 2017, it’s become very popular in fat burners and pre-workouts as a stimulant (it’s believed to deliver 80% of the effects of DMAA). But again, we remind you that ingredients don’t get banned for no reason – DMAA caused numerous side effects.

But that’s not all: there hasn’t been any long-term safety research on this ingredient yet – meaning no-one knows how safe DMHA really is. It’s up to you, but we’re choosing to avoid this, at least until there’s further research conducted.

Theobromine is a stimulant found in chocolate (it’s believed that this is what causes the energy boost after eating dark chocolate, although we believe it’s the sugar content…).

Anyway, we’re quite old fashioned, but we believe caffeine is still the best (and safest) stimulant on the market. People drink tea & coffee everyday without any side effects, and it’s proven to work in supplements – there’s no need to try and fix something that’s not broken here.

This is structurally similar to caffeine, meaning it’s believed to be a type of stimulant. As you can see, Sidewalk Kraka contains numerous different stimulants – this is a bad thing, as it increases your risk of side effects like jitters and energy crashes.

There was an overdose of caffeine to begin with, so Iron Addicts should’ve stopped there with the stimulants.

This is a flavanoid and antioxidant extracted from grapefruits. It’s not been researched much, so it’s not known whether it delivers any benefits in supplements yet (as of 2017).

However, the few studies conducted show that it could negatively interact with other drugs (which is bad news if you suffer from any condition that requires you to consistently medicate, such as asthma).

Remember how we said DMHA is believed to be the perfect replacement for DMAA? Well, Rauwolfia is considered the best replacement for Yohimbine (which has been banned in the UK, among other countries).

Not only that, Rauwolscine’s main benefit is to promote fat loss – there are already great fat burners on the market, so there’s no need for a pre workout to offer this benefit. 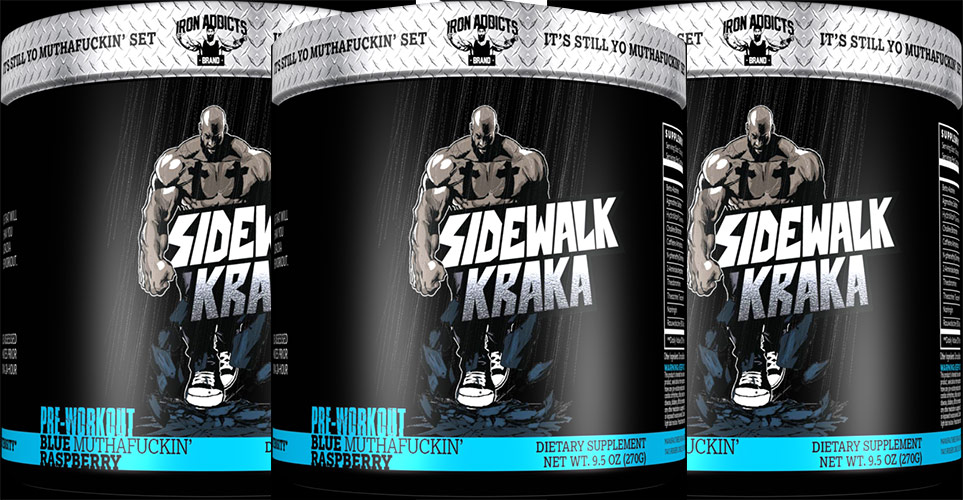 Check Out The
– Best Pre Workouts On The Market Here –

We’ll give it to you straight: Most of Sidewalk Kraka’s ingredients have been reported to cause side effects. This is a common mistake made by supplements companies when trying to make the strongest pre workout on the market – they simply add in potentially harmful ingredients.

You’re at risk from suffering:

As you can see from the ingredient list, Sidewalk Krala isn’t side effects free…if that obvious fact doesn’t put you off this pre workout supplement, then fair enough.

However, we’ve reviewed hundreds of products, and there are many pre workouts that contain better ingredients (without putting you at risk of side effects). Ultimately, other pre workouts offer more benefits, giving you better value for money.