Super Charge is a pre-workout supplement By Labrada Nutrition. It comes in a 25 serving container, in 4 flavors – Fruit Punch, Grape, Raspberry Lemonade, and Watermelon. 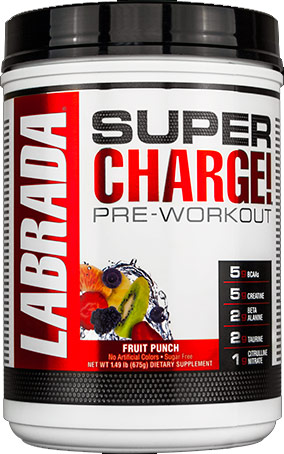 We’ve analyzed this product and its ingredient list, as well as the company behind it – to help you make your own decision about Super Charge.

They endorse athletes to celebrities, and market a range of products – from fat burners to protein powders.

Super Charge contains some less common ingredients for a pre-workout, such as Citrulline Nitrate and Glycerol – but these aren’t at complex as you might think.

We’ve explained every single ingredient in Super Charge in this section – so you’ll know how effective this product is overall.

This is simply a combination of L-Citrulline and Nitrate. Both are precursors to nitric oxide at first impressions, this ingredient should be effective in boosting your nitric oxide levels – resulting in intense muscle pumps.

However, there’s been no studies conducted to prove that it’s as effective as Citrulline Malate, which is a mixture of L-Citrulline & Malic Acid – it’s more common in pre-workout products, because Citrulline Malate is proven to work.

There’s also a problem with the dosing – L-Citrulline’s optimal dose is 6,000-8,000mg to raise nitric oxide levels. As it’s part of this ingredient, Citrulline Nitrate isn’t likely to be effective at delivering muscle pumps at only 1,000mg.

Labrada Nutrition has seriously under-dosed this ingredient – they should’ve increases the dose to between 6,000mg-8,000mg.

Technically a sugar alcohol, Glycerol is a syrupy liquid and is almost as sweet as table sugar. It’s classed as a carbohydrate source by the FDA, and can be found in high amounts in protein bars. This is because of Glycerol’s water binding ability – it helps keep protein bars soft, which also helps keep your body hydrated after oral supplementation.

However, there’s been no studies conducted to confirm that Glycerol actually benefits your gym session.

This is an organic acid that contains sulfur. It’s most commonly used to reduce cramping due to its ability to improve blood flow – this benefit isn’t essential in a pre-workout supplement, but Taurine doesn’t come with any negative points either.

Labrada Nutrition has dosed this perfectly, as studies have shown its most effective in doses between 500mg-2,000mg.

This ingredient has been around for a long time – it was first supplemented in the 1990’s, making it one of the most reliable nutrients out there.

It’s proven to improve your strength and endurance in countless studies. Labrada Nutrition have dosed Creatine Monohydrate well at 5,000mg per serving.

Labrada Nutrition should’ve left Beta-Alanine out of Super Charge – it’s been added due to its ability to increase muscular endurance.

We recommend that you stay away from Beta-Alanine to avoid paresthesia – especially as Creatine Monohydrate offers the same benefit and is already part of this pre-workout.

BCAAs are a mixture of Leucine, Isoleucine, and Valine – three branched chain amino acids that can be found in meats and other protein sources.

Labrada Nutrition has included BCAAs in Super Charge as they’ve shown to boost endurance and reduce fatigue. However, you can get enough BCAAs from a well-planned diet – meaning BCAA supplementation isn’t necessary.

The main benefit of L-Tyrosine is improved mental function (memory, focus, and reaction time). For this reason, it’s more suited to a Nootropic product – Caffeine boosts mental function enough for a pre-workout supplement.

An ingredient like Beetroot Extract, which boosts nitric oxide levels due to its high nitrate content – resulting in great muscle pumps while lifting weights.

This is one of the most beneficial and safe nutrients out there – it’s found in countless products worldwide on a daily basis, such as tea and coffee.

Caffeine’s shown to enhance strength and endurance, as well as mental function (memory, focus, reaction time) – all key benefits for a pre-workout.

Super Charge contains 300mg of Caffeine, which is the upper limit on this ingredient –  its recommended daily allowance (RDA) is set at 400mg, so you may have to skip coffee and tea breaks if you’re using this product.

We recommend looking for a pre-workout containing a serving of 150mg-200mg of Caffeine, to avoid any unwanted side effects. This is a great amount to assess your tolerance to this ingredient – even those sensitive won’t be negatively affected by 150-200mg servings.

Also known as Synephrine or Bitter Orange Peel, this can be a harmful ingredient to consume.

It’s been used in supplements since the FDA banned Ephedrine, due to providing similar benefits (increased fat loss). However, Bitter Orange Peel has shown to be just as dangerous – it’s caused side effects like high blood pressure, fainting and vomiting.

We strongly reccomend that you avoid this ingredient, and any products containing it.

This is extracted from the Huperzia Serrata plant and used for its mental function boosting properties – it’s more suited to a Nootropic product, as Caffeine (which is contained in Super Charge) boosts mental function enough for a pre-workout.

However, this ingredient comes with risks of side effects, such as nausea, diarrhea, vomiting, sweating and blurred vision. We recommend staying away from Huperzine A to avoid experiencing these side effects.

A proprietary blend is a mixture of numerous ingredients that are shown to you as one quantity. This is bad, as you’ll never know the exact amount of each ingredient inside – this puts you at risks of side effects if you’re sensitive to any ingredients in this blend.

More commonly known as salt, Labrada Nutrition shouldn’t have put this inside a proprietary blend – the RDA for salt is 2.5g per day, and there could be more than that in this blend – you’ll never know how much salt is inside, but the overall quantity of this blend is 4g, so there could be up to 3-4g of salt inside.

Too much salt in your diet can result in serious side effects, such as high blood pressure and also damage to your blood vessels.

We strongly recommend that you consume less than 2.5g of salt per day to stay healthy and safe.

This blend also contains minerals, such as Calcium Gluconate, Magnesium Succinate, Potassium Phosphate. We’ve placed them all together as they’re not key to a pre-workout supplement – they don’t deliver any benefits to aid your training session. 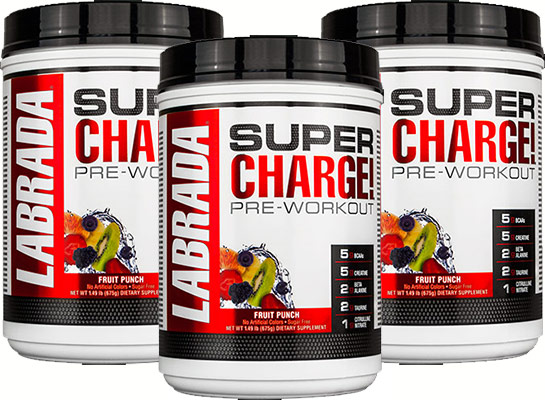 There are many unproven ingredients in Super Charge, as well as a few potentially harmful nutrients.

There are a few cause for concerns in Super Charge, the biggest being the inclusion of Bitter Orange Peel – this can cause severe side effects like high blood pressure, fainting, and vomiting.

Here is the full list of potential side effects:

Labrada Nutrition has tried very hard to create a unique pre-workout supplement – they’ve included Citrulline Nitrate instead of the tried and tested Citrulline Malate, and Glycerol.

However, there hasn’t been many studies conducted on these uncommon ingredients, meaning they might not deliver any benefits.

Also, Labrada Nutrition has made mistakes by including Citrus Auranium (Bitter Orange Peel) in Super Charge – it’s known to cause numerous side effects such as nausea, high blood pressure, and diarrhea.

We recommend that you stay away from Citrus Auranium (Bitter Orange Peel), and other ingredients that can cause side effects like Beta-Alanine and Huperzine A.

You should look for pre-workouts that contain key ingredients, such as Citrulline Malate & Beetroot Extract (both promote muscle pumps), and L-Theanine – L-Theanine works in synergy with Caffeine and forms a ‘smart-caffeine’, which enhances the benefits of Caffeine without risking side effects like jitters and energy crashes.