EFX Sports Test Charge’s box first got our attention – it doesn’t come in the usual bottles that testosterone booster products do. Instead, we were presented with this box that looks more like a medical kit than a gym supplement.

But that’s not the only unusual thing about Test Charge; it comes in 3 bottles (and is also liquid instead of capsules or powder) with each containing different ingredients.

There’s simply no need for this, and we’d prefer a more refined product that contains less ingredients – taking 3 servings from different bottles each day will be a big hassle.

EFX sports are a USA-based supplements company, which markets a variety of products – from creatine to testosterone boosters like Test Charge.

We were disappointed with the lack of information about them on their website; instead, we were directed to a page about their managerial team.

Anyway, what really matters is the ingredients in Test Charge. So let’s take a look.

As we’ve mentioned, there are 2 different bottles of Test Charge (all containing different ingredients). This means there are an overload of ingredients inside this testosterone booster – and more isn’t always better.

Immediately, we see an ingredients that we don’t like – Yohimbe. In a nutshell, this has been banned in the UK and Canada (among other countries) after causing harmful side effects.

We try to avoid any kind of banned substances, so this it’s not good seeing Yohimbe on an ingredient list.

We were shocked to see that EFX Sports are trying to convince people that their testosterone levels begin dipping “year after year”. Here’s a snapshot:

Bearing in mind that 25 is during your ‘prime’ years, it’s worrying that EFX Sports have lied in order to sell this product. If you’re interested, it’s just after you’re 30-years-old when your testosterone levels begin declining (and even then it’s only by 1% each year).

Don’t get us wrong; a 25-year-old male can still benefit from a testosterone booster, but there’s no need to fool them into thinking their testosterone levels are naturally in decline.

Anyway, we’ll analyze the ingredient inside Test Charge for you. Take a look: 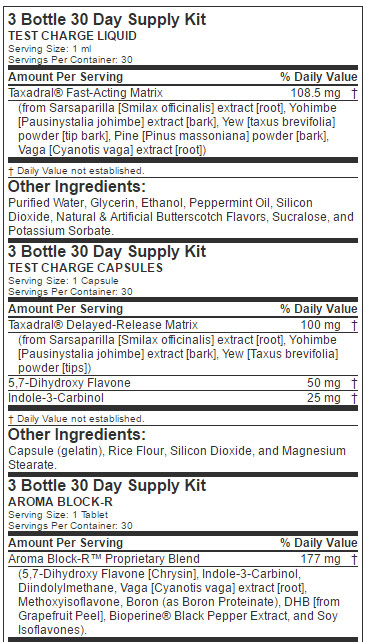 This is a chemical extracted from the bark of the Yohimbe tree (found in western and central Africa). Basically, this ingredient is believed to help you shred fat and treat erectile dysfunction – we’re assuming EFX Sports have added Yohimbe into Test Charge Kit to try and strengthen your erections.

However, it’s been banned in numerous countries after causing side effects (it’s been reported to cause severe side effects such as changes in blood pressure, chest pain and exhaustion).

As a result, we recommend you to stay away from this ingredient.

Also known as Taxus Brevifolia, this is the first time we’ve seen this in a supplement. However, after asking our experts about it, we weren’t impressed – in a nutshell, there’s been many cases of people experiencing yew poisoning and the lethal dosage is worryingly small (2.3g).

Although there’s not enough to poison you in Test Charge, as it’s not shown to benefit you, we choose to stay away from this ingredient.

This is also referred to as Chrysin, and is a flavanoid found in passion flowers. It’s believed to have an anti-inflammatory effect – but it hasn’t shown to have any effect on your testosterone levels (making it ineffective in a testosterone booster supplement).

Also known as DIM, this has shown to prevent testosterone converting to estrogen (aromatase inhibitor). However, natural testosterone boosters aren’t strong enough to encourage your body to begin converting T into E – meaning there’s no need for DIM here.

Boron is a dietary mineral that’s shown to increase testosterone when consumed in dosages between 3-6mg – this is a tiny dosage for an ingredient to be effective, so we’re giving this the thumbs up.

It doesn’t take up much space in supplements, so it’s a great ingredient to have in a testosterone booster.

This is most commonly used to make food taste better – but it’s shown to improve the absorption rate of other ingredients that it’s consumed.

It’s a great addition to have (as it works in tiny dosages and doesn’t take up much space), but it’s never a key ingredient that’ll make or break a product.

There are a couple of ingredients to be worried about in EFX Sports Test Charge – Yew (Taxus Brefivolia) and Yohimbe.

In a nutshell, Yohimbe’s been banned in countries such as the UK and Canada for causing severe side effects, and Yew can be toxic in fairly small dosages.

Although Yew’s in a small dosage in Test Charge, as it doesn’t offer any benefits – we don’t recommend you to consume this ingredient.

We understand why companies add Yohimbe to supplements (it’s proven to work), but there are many better options that won’t cause side effects – our favorite testosterone boosting ingredient is Vitamin D3, which is 100% safe. 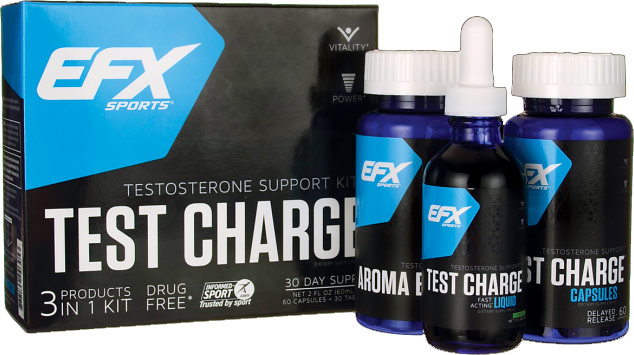 Not what you’re looking for? See Our
– Highest Rated Testosterone Boosters Page –

There’s simply no need to take 3 different servings from 3 different bottles – if this was better, more companies would’ve created testosterone boosters like this. There’s a reason why most come in capsule form, in 1 bottle – because it works.

In a nutshell, EFX Sports has tried to fix something that’s not broken here. Not only that, they’ve added useless ingredients that haven’t shown to work in any studies – and even Yohimbe, which is known to cause potentially severe side effects.

This is nowhere near good enough for the price EFX Sports are asking for ($49.99). We recommend that you look for a testosterone booster that contains key testosterone boosting ingredients that’re proven to work – making sure you get the best deal.